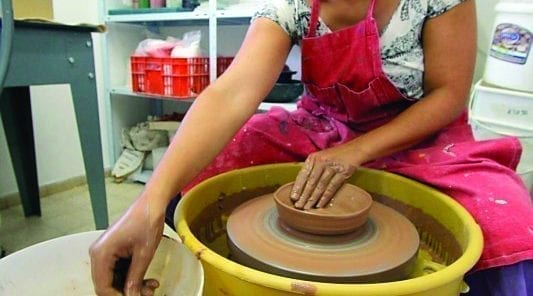 Getting Them Back to Work Ten years ago the people of Gush Katif were brutally uprooted from their homes. Their homes and greenhouses were destroyed. Businesses were gone and jobs lost. After months of wandering, most of the people settled in temporary housing. But the road to recovery was a long one. For most of […]

Read more ›
The Dangers of Extremism

August 4, 2015 This is a very difficult time in Israel.  Two children, a 2-year old baby and a 16 year old girl were murdered over the weekend.  The baby was an Arab child and he was killed Thursday night when terrorists burned down his family home, killing the baby and seriously injuring other family […]

Read more ›
Terrorism Needs To Stop; The Jews Are Here To Stay

July 7, 2012 Terrorism has reared its head again in Judea and Samaria.and in Jerusalem.  We are not yet witnessing a full-scale terrorism war on the scale of what was happening here 10 years ago.  Far from it.  The atmosphere is peaceful and people travel regularly and comfortably throughout the area.  But some of the […]

Read more ›
The Importance of Security In Our Lives

Tuesday, June 2, 2015 Security is something we often take for granted in Israel.  Ever since the establishment of the modern State of Israel in 1948, Israel has had to defend itself against enemies from both within and without.  Our Arab neighbors have tried time and again to destroy us, launching wars and attacks across […]