What is an Israeli Settlement? 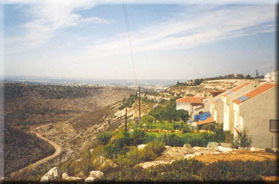 What are Israeli Communities?

The Biblical region of Judea and Samaria was given to Abraham, Isaac, Jacob and their descendants, forever, 4000 years ago. Today Jews have returned to their ancient homeland in fulfillment of Biblical Prophecies. These Jewish communities, otherwise known as “settlements”, are located in the very heartland of Biblical Israel.

Some FAQ’s (frequently asked questions) about these communities:

Why have Israelis built these communities?

Because God Called His People to “Settle the Land”.

“I will settle people on you as in the past and will make you prosper more than before.” Ezekiel 36:11

Judea and Samaria is the Biblical name for the center of the Holy Land also called the Mountains of Israel. The media refers to this area as the “West Bank.” The residents of these areas, otherwise referred to as “settlers” are fulfilling prophecy and pointing the way for the rest of the Jewish people back to their roots.

What is a Settlement?

How does a Settlement Get Started?

The first communities were established in the 1970’s as small military outposts that were later turned over to families who committed themselves to live and develop the land for security purposes. Others began with a nucleus of families in tents or caravans (mobile homes), laying the foundations for what later became residential communities or cities. The larger urban communities were developed as a result of careful government planning and support. In all cases, the Government of Israel authorized and encouraged the creation of the community, lending assistance for infrastructure and development.

With the exception of some of the newest neighborhoods, all communities have built permanent housing and public buildings, including schools and synagogues. Some communities are structured as an agricultural “moshav” where the common work benefits the whole community; others, called “yishuv”, are more like suburban neighborhoods in the USA. All have day care centers to assist working parents. A community can be as small as twenty families or large enough to have a university and industrial park.

What does the Bible say?

The Biblical region of Judea and Samaria was given to Abraham, Isaac, Jacob and their descendants, forever, 4000 years ago. Because of sin, disobedience and lack of belief, most Jews were driven from the land around 70 AD. However, there were always some Jews living in the Land and Jews around the world have prayed to God three times a day, each day, to return His people to Zion. The prophets foretold the ingathering of the exiles and the rebuilding of the Land in the latter days. (Ezekiel 36, Amos 9 to mention a few). In 1948, Israel was reborn as a sovereign nation and in 1967 the “West Bank” was reunited with the rest of the nation in the prophetic, miraculous Six Day War. Although Jordan occupied half of Jerusalem, Judea and Samaria for 19 years and Egypt occupied the Gaza Strip during the same period, there was never any attempt to form a Palestinian State at this time. The land remained barren until the Jews returned to cultivate it. This is truly the fulfillment of prophecy.

Why does CFOIC Heartland support the people of Judea and Samaria?

In 1993 and again in 1995, Israel transferred significant territory to the Palestinian Authority, in accordance with the Oslo Accords. Israel entered into this so-called peace process in the hopes that territorial withdrawal would ultimately bring peace and prosperity to an area that has known so much killing and bloodshed. Many political and religious leaders, however, warned that the withdrawals ran counter to God’s plan for the Jewish nation and would only weaken Israel in future confrontations with her enemies. Christian Friends of Israeli Communities (CFOIC Heartland) was established in 1995 in response to the Oslo Process. Christians around the world were deeply troubled by Israel’s major territorial concessions and felt drawn to the people that stood on the forefront of Israel’s territorial battle – the people of Judea and Samaria. CFOIC Heartland provided a much-needed vehicle for Christians to become better informed about events in Israel, particularly with regard to the Jewish communities in the heartland of Biblical Israel, to visit these areas and become personally connected to the people living there, and to provide practical support for vital community needs.

CFOIC Heartland is not an evangelizing ministry, but rather aims to build bridges of love and mutual respect between Christians and Jews. CFOIC Heartland brings unconditional support to the Jewish communities and partners with the dedicated pioneers of Biblical Israel to fulfill Biblical prophecy.

How can Christians help?

The Peace Process has failed and the vision for a Two-State Solution has been proven irrelevant. Rather than usher in a new era of peace and tranquility, years of negotiations between Israel and the Palestinian Arabs created conditions that were more conducive than ever before to terror and bloodshed. Throughout, Christians from around the world have stood up for Israel and become valuable friends and supporters of the pioneers of Biblical Israel. Through CFOIC Heartland churches, ministries and individuals have visited the communities and biblical sites of Judea and Samaria and have linked directly with communities. Thousands of individuals have provided financial support for community projects and have made a real difference in the ability of these communities to cope in the face on ongoing terrorism and to thrive as they hope and pray for the extension of Israeli sovereignty over this vital area of Israel. “For if the Gentiles have shared in the Jews spiritual blessings, they owe it to the Jews to share with them their material blessings.” Romans 15:27