Who “Owns” the Land of Israel? Part 4

Shechem – The city of Shechem is first mentioned in Genesis 12:6 Abram passed through the land to the place of Shechem, as far as the terebinth tree of Moreh. And the Canaanites were then in the land. This is the first place where Abraham enters the promised land and this is the first time that Abraham hears God say “this” is the land that I promised to show you.

The next time Shechem is mentioned is during an actual real estate transaction. Money changes hands when Jacob buys the land from the children of Hamor. Genesis 33:18-20  Then Jacob came safely to the city of Shechem, which is in the land of Canaan, when he came from Padan Aram; and he pitched his tent before the city. And he bought the parcel of land, where he had pitched his tent, from the children of Hamor, Shechem’s father, for one hundred pieces of money.  Then he erected an altar there and called it El Elohe Israel.

Today Shechem is an Arab city under the control of the Palestinian Authority. I have never visited Shechem because it is not safe to go into the city; however, I have stood on a mountaintop across the valley and looked over the city. If you believe everything you read in the newspapers you would think that millions of Arabs have lived here since before Abraham. Recently, I received a picture that tells a very different story. Look at the picture below dated 1920 — the city of Shechem is tiny! The modern picture, taken from the exact same place shows the modern city which has grown tremendously.  But these Arabs are newcomers, way after Abraham.  Actually, they arrived in the land after the Zionist movement had begun settling new communities in the Land of Israel at the beginning of the 20th century. 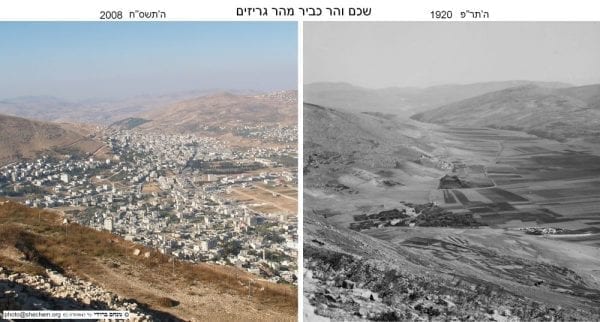 What is really significant about Shechem and why I believe it was important enough for God to record Jacob’s purchase of the land in Genesis, is what is recorded later on in the Bible about this city. In Deuteronomy 11 and 27 Moses commands the people to build an altar on Mount Ebal, just after their entry to the Land, where they are to reaffirm the covenant that God entered into with them in the wildernes.  In Joshua 8 we read how Joshua obeys Moses’ command and gathers all the tribes of Israel at Mount Ebal and Mount Gerizim,  Half of the tribes stand on one mountain and the other half stand on the second mountain and together they declare Amen to the blessings and the curses recited by the priests as promised by God. Why is this significant?  Deutermony 11:29-30 tells us that this very spot between Mount Ebal and Mount Gerizim is adjacent to the terebinth of Moreh, where Abraham first heard God’s promise to give the land to his children, the “Promised Land. ” God brings the Children of Israel back to that very spot and it is there that He reaffirms His covenant with them.

If you look at the picture of Shechem above, you will see that it is located in a valley between two mountains. Mount Gerazim is on the left and Mount Ebal is on the right. So when God had Jacob purchase land in the city of Shechem, it was for a purpose. He knew that He would bring His children back to the very spot where He first spoke the promise to Abraham, all the land that you see I give to you and your descendants forever (Genesis 13:15).  Four hundred years later Abraham’s descendants stand on this very spot and begin the fulfillment of that promise.  Four thousand years later, Abraham’s descendants are once again in this Land, living in the Mountains of Samaria, possessing the land in fulfillment of prophecy.

We will visit the 3 seas overlook on our tour to Israel in March 2014. We will take you to the top of the mountain and show you the place where Abraham first entered the Promised Land, and we will open our Bibles to Genesis and Joshua and read about Elon Moreh, Shechem, Mount Ebal and Mount Gerizim. You will get to see firsthand what God was talking about as He made that amazing promise to Abraham, deeding the Land as an everlasting inheritance for his descendants. I hope you will join me and stand with me on that amazing mountain and experience the living Bible. “It is a tree of life for all who hold it” (Proverbs 3:18)

I encourage you to pray about joining me in the Land of Israel, March 16-23, 2018.  You can come and experience the Holy sites, both Christian and Jewish and see for yourself the “Oak of Moreh” where Abraham first entered the Promised Land.