Who “Owns” the Land of Israel? Part 1

Recently, someone posted the following comment on our Facebook page: “They may be God’s chosen people, but that does not give them the right to deprive others of their land and their homes and their livelihoods. God loves those who seek JUSTICE, not land.”

And that got me thinking — whose land is it anyway?  Since I’ve worked most of my adult life to support Jews living in the land of Israel, specifically, those living in the Biblical heartland, Judea and Samaria, I’ve come to realize this is a critical question that every Christian who loves Israel should answer with Scripture.

Psalm 24:1-2 The earth is the Lord’s and the fullness thereof, the world and those who dwell therein, for he has founded it upon the seas and established it upon the rivers.

King David says it so clearly in this verse: the Earth, the entire world belongs to the creator. When you think of a creative masterpiece, who initially owns that piece of art? The people who have created it. They are the only people who truly own it; they see its full potential, they see it with a vision for its ultimate destiny. They are trying to express an idea or a vision, to capture the inexpressible and share it with others. Then they choose who and how they will give their masterpiece to someone else. This is what God did when He created the world. He built paradise and shared it with mankind. So it truly is His to give to whomever He chooses. As we look further into Scripture we can see that He has made it very clear who is the rightful recipient of the Land of Israel.

Deuteronomy 32:8-9 When the Most High gave to the nations their inheritance, when he divided mankind, he fixed the borders of the peoples according to the number of the Children of Israel. But the Lord’s portion is his people, Jacob his allotted heritage.

From this verse, we learn that the Most High gave each nation their inheritance; He divided mankind, and fixed the borders. Moreover, he fixed the borders of the nations, based on what the Children of Israel would require!  God’s borders, then, are not set by governments or political parties. When I think about all of the borders that have been drawn and re-drawn in my short lifetime, I find it amazing that the borders of Israel cause so much angst for almost every nation on earth! When you look at it with a purely natural eye, the situation in Israel today with regard to borders is beyond ludicrous!  If someone remodels their kitchen, or adds a porch to their house in Judea or Samaria, it causes consternation from the White House to the Kremlin, to parliaments across the world, and of course in The Hague.  National borders changed and entire countries were created between the two world wars and no one made a fuss.  So why is Israel different?  Could it be because there is a spiritual element involved?

Genesis 12:1-8 Now the Lord had said to Abram: “Get out of your country, From your family And from your father’s house, To a land that I will show you.  I will make you a great nation; I will bless you And make your name great; And you shall be a blessing. I will bless those who bless you, And I will curse him who curses you; And in you all the families of the earth shall be blessed.”  So Abram departed as the Lord had spoken to him, and Lot went with him. And Abram was seventy-five years old when he departed from Haran.  Then Abram took Sarai his wife and Lot his brother’s son, and all their possessions that they had gathered, and the people whom they had acquired in Haran, and they departed to go to the land of Canaan. So they came to the land of Canaan. Abram passed through the land to the place of Shechem, as far as the Oak of Moreh (Alon Moreh). And the Canaanites were then in the land.  Then the Lord appeared to Abram and said, “To your descendants I will give this land.”And there he built an altar to the Lord, who had appeared to him.  And he moved from there to the mountain east of Bethel, and he pitched his tent with Bethel on the west and Ai on the east; there he built an altar to the Lord and called on the name of the Lord.

This one Scripture has two very important themes, 1) God’s commandment to Abram, first “Go to the land that I will show you”, and secondly His initial promise, “To your descendants, I will give this land”.  2) There are four very distinct city names mentioned, Shechem, Alon Moreh, Bethel and Ai.  Look closely at this map to see where all four of these named cities are located.  All four are found in the area that today the world calls 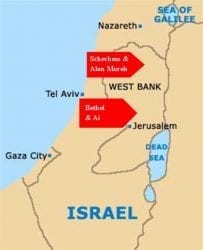 the “West Bank”. This is the area that our friend on Facebook says doesn’t belong to the Jewish people. Where Jews are “land-grabbing” and forcing Palestinians out of house and home. When we look at this map with our Bible open and we read God’s commandment, “Go to the land that I will show you”, and then His promise, “To your descendants I will give this land”, it paints a very powerful picture. I think we can begin to see why world leaders get heartburn when a Jew builds a house in Judea or Samaria. He is fulfilling God’s commandment and partaking of God’s promise. The devil never likes to see anyone obey God or walking in the blessing of God.

Genesis 17:19-21 19 Then God said: “No, Sarah your wife shall bear you a son, and you shall call his name Isaac; I will establish My covenant with him for an everlasting covenant, and with his descendants after him. And as for Ishmael, I have heard you. Behold, I have blessed him, and will make him fruitful, and will multiply him exceedingly. He shall beget twelve princes, and I will make him a great nation. But My covenant I will establish with Isaac, whom Sarah shall bear to you at this set time next year.”

God knew what was going to happen in the twentieth century, when He fulfilled His promise to return the descendants of Abraham to the Land of Israel. He knew that the modern State of Israel would be established in 1948, and the Arab world would dispute Israel’s legitimacy. God states very clearly to Abraham, your descendants, your heirs to the promise, those that I will establish My covenant with will come through Isaac. Ishmael is your son, and he will also receive an inheritance, but My covenant people will be the sons of Abraham and Isaac.