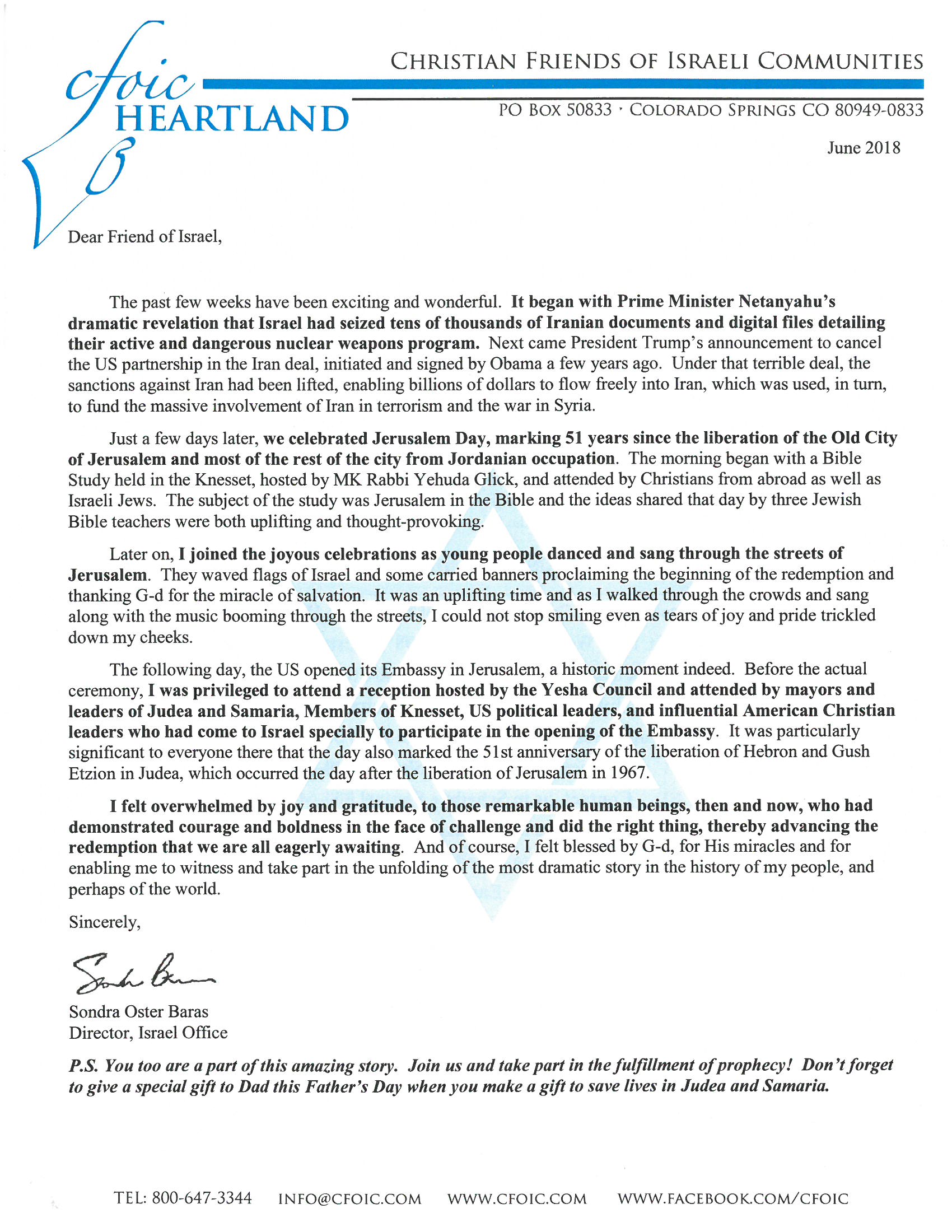 The past few weeks have been exciting and wonderful.  It began with Prime Minister Netanyahu’s dramatic revelation that Israel had seized tens of thousands of Iranian documents and digital files detailing their active and dangerous nuclear weapons program.  Next came President Trump’s announcement to cancel the US partnership in the Iran deal, initiated and signed by Obama a few years ago.  Under that terrible deal, the sanctions against Iran had been lifted, enabling billions of dollars to flow freely into Iran, which was used, in turn, to fund the massive involvement of Iran in terrorism and the war in Syria.

Just a few days later, we celebrated Jerusalem Day, marking 51 years since the liberation of the Old City of Jerusalem and most of the rest of the city from Jordanian occupation.  The morning began with a Bible Study held in the Knesset, hosted by MK Rabbi Yehuda Glick, and attended by Christians from abroad as well as Israeli Jews.  The subject of the study was Jerusalem in the Bible and the ideas shared that day by three Jewish Bible teachers were both uplifting and thought-provoking.

Later on, I joined the joyous celebrations as young people danced and sang through the streets of Jerusalem.  They waved flags of Israel and some carried banners proclaiming the beginning of the redemption and thanking G-d for the miracle of salvation.  It was an uplifting time and as I walked through the crowds and sang along with the music booming through the streets, I could not stop smiling even as tears of joy and pride trickled down my cheeks.

The following day, the US opened its Embassy in Jerusalem, a historic moment indeed.  Before the actual ceremony, I was privileged to attend a reception hosted by the Yesha Council and attended by mayors and leaders of Judea and Samaria, Members of Knesset, US political leaders, and influential American Christian leaders who had come to Israel specially to participate in the opening of the Embassy.  It was particularly significant to everyone there that the day also marked the 51st anniversary of the liberation of Hebron and Gush Etzion in Judea, which occurred the day after the liberation of Jerusalem in 1967.

I felt overwhelmed by joy and gratitude, to those remarkable human beings, then and now, who had demonstrated courage and boldness in the face of challenge and did the right thing, thereby advancing the redemption that we are all eagerly awaiting.  And of course, I felt blessed by G-d, for His miracles and for enabling me to witness and take part in the unfolding of the most dramatic story in the history of my people, and perhaps of the world.

P.S. You too are a part of this amazing story.  Join us and take part in the fulfillment of prophecy!  Don’t forget to give a special gift to Dad this Father’s Day when you make a gift to save lives in Judea and Samaria.