Will you join me in the fight against anti-Semitism?

I just returned from the US where I had the opportunity to connect personally with so many Jewish and Christian friends of Israel and of the communities in Judea and Samaria.  While I usually spend the overwhelming portion of my time amongst Christian friends, on this trip, I was able to connect with a number of Jewish friends, as well.  And they shared some of their greatest fears and concerns with me.  And I want to share them with you.

Anti-Semitism and Anti-Zionism are hitting critical masses all over the United States today.  A recent study found that one-third of Jewish students on American college campuses experienced anti-Semitism personally.  Often, Jewish students are frightened to reveal their Jewish identity.  Others have been vilified for their pro-Israel activity or sentiment.

For years, Apartheid Week has been a feature on far too many college campuses, when Palestinian lies are given legitimacy and Israel is accused of racism, crimes against humanity and unjustified violence against Palestinian civilians.  When Jews and other pro-Israel advocates try to provide evidence to the contrary and explain that Israel is forced to defend itself and its civilian population against Arab terrorism, they are accused of fascism and, in some cases, violently attacked.

A Jewish professional at a Ohio university wrote: “Our students are constantly being asked where their horns are (don’t have any!), why they killed Palestinian babies (they don’t) or have their mezuzah dropped from their dorm doors.”  (JTA)   And incidents like these repeat themselves on campuses all over the country.

Just yesterday, we read of a Torah scroll at a Jewish center on the George Washington University campus that was desecrated in horrible ways — ripped apart, detergent poured over it and pieces scattered on the floor.

We have all watched with increasing concern as more and more left-wing organizations around the world adopt anti-Israel positions.  For years, we have remained firm in our assertion that anti-Zionism is just a new form of anti-Semitism. But today, we are seeing, clearly before our very eyes, the merging of anti-Israel and anti-Jewish attacks.

There is also an increase in anti-Semitism from the right. A recent article in Charisma Magazine documents the influence of far-right and alt-right entities on Christians, as they exploit COVID-19 anti-vax attitudes to turn people away from Israel.  I must admit that I have received a few emails from Christians who have attacked Israel for their vaccine program, using language that is reminiscent of classic anti-Semitism.  Of course, the COVID-19 vaccine debate is both important and legitimate, whichever side of the debate you are on. The problem begins when the argument is manipulated to create anti-Semitism and anti-Israel sentiment.

You are our friends and supporters and I trust you to remain true to Israel and kind and respectful of your Jewish neighbors and friends.  But I feel the need to enlist you in the battle against Anti-Semitism.  I would like to hear from you personally — have you heard of anti-Semitic attacks against Jews in your area or on college campuses nearby?  Is there a synagogue or Jewish cemetery near you that has been desecrated?  Let’s put our heads together and figure out a way to mobilize our joint resources and contacts to fight this devil before it becomes even more dangerous than it already is today.

When I read of the growing anti-Semitism in the US, especially on college campuses, I picture the lone Jewish student, feeling beleaguered and frightened to reveal his true identity and that pains me deeply.  As a Zionist, I thank G-d daily that He has enabled me to return to my home, to the Land of Israel, where I can raise my head and announce proudly for all the world to hear:  I am a Jew.  I am free to study the Bible, keep the holy Shabbat, observe the dietary rules of Kosher and I never feel odd.  I am always part of the group, a member of the majority culture.

And given our history of persecution from anti-Semites all over the world, Israel is uniquely sensitive to the needs of minorities and they are always made to feel welcome to pray and practice their different faiths or customs as they wish.

But anti-Semitism does rear its head in Israel as well.  It is a common phrase in Israel that our country is like a villa in a jungle.  We have built a beautiful home in the Land of Israel but we are surrounded by enemies who will do anything to destroy us.  And make no mistake — our enemies couch their claims against Israel in terms of civil and land rights, but at the end of the day, they are infected with anti-Semitism.  Some of the worst anti-Semitic libels are featured daily in newspapers and on social media emanating from Arabic speaking countries and their many supporters all over the world.

So imagine now what it must feel like to live in a small isolated community in Judea and Samaria, surrounded by neighboring Arab villages who are particularly hostile to Israel.  These communities are  the villa in a jungle.  Imagine a young Jewish woman, who commutes each day between her home in Judea and her office in Beersheba.   As she travels the narrow, isolated roads on her approach to her community, she peers cautiously out the window and wonders if someone will suddenly throw a boulder or Molotov cocktail at her.

Like that lone Jewish student on the college campus, the lone Jewish woman on an isolated road in Judea feels vulnerable and afraid.  But unlike the American Jewish college student, the Israeli woman knows that she is home, in her own country.  She is proud to be Jewish and will never hide her Jewish identity.  But she does need support.  She needs encouragement that she is not alone in her efforts to settle the land.  That someone out there is helping her and trying to keep her safe.

The smaller, more isolated communities face unique challenges. They are often surrounded by hostile Arab villages, with no neighboring Jewish communities nearby. Residents take turns patrolling the area, and rapid response team volunteers are often called out for emergencies in the middle of the night. It is not easy to live in a small isolated community in Judea and Samaria. But the people who have chosen to live there are strong, imbued with faith, and determined to settle the land. You can support a brave pioneer in Judea and Samaria!

Anti-Semitism has reared its head in a terrible way in the US and around the world. But its roots go way back even to early Christianity. Click here to learn more about the terrible history of Christian Anti-Semitism. 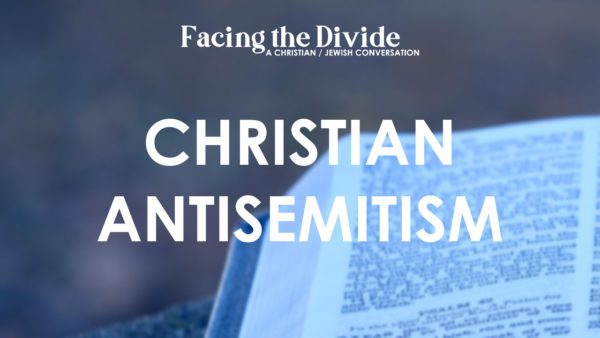 5 thoughts on “Anti-Semitism is Growing!”