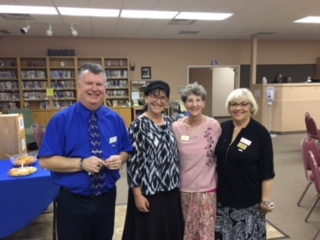 The Miracle of Christian Zionists

As I write this newsletter, I am on a plane from Dallas to Tuscon, during the early days of a speaking tour in the US.  As always, I spent Shabbat with the Jewish community, praying in a local synagogue.  Everyone was so friendly and people were eager to learn who I was and where I was from.  When I told them that I was in Dallas to speak to Christians and that I was moving on to other cities in the US for the same purpose, they were intrigued.  While they have all heard of the burgeoning awareness and support that Israel receives from American Christians, for many, this was the first time they had met someone who is actually involved in this work.

One fellow expressed surprise that Christians would be able to connect to Jews.  His question focused on the theological aspects.  And I understood exactly where he was coming from.

He referenced the ages-old accusation of the church that the Jews had killed Jesus and that Christianity had supplanted Judaism.  Against that context, he was perfectly right to question how Christians could have a relationship with Jews if they think that we have no legitimacy as a religion or as a people.

I agreed with him that those in Christianity who continue to believe in replacement theology or who continue to blame the Jewish people for the death of Jesus could not connect with Jews.  But what he was not aware of and what I explained to him was the large number of Christians all over the world, including whole denominations, who have rejected replacement theology and who refuse to blame the Jews for Decide.

Christians all over the world, I explained, are seeking a more authentic Christianity.  Unlike Catholics who for centuries were discouraged from reading the Bible, Christian Zionists are coming from traditions that encourage the individual Christian to read the Bible and seek understanding from the plain meaning of the text.  As I remind my Christian friends in my talks, 80% of the Christian Bible is the Jewish Bible — what a wonderful basis that is for cooperation and respect!

Interestingly, the days before this encounter in the synagogue, I had occasion to meet and speak with a number of Christian leaders who support Israel.  In the course of conversation, one of the pastors that I was talking to mentioned his own search for meaning in Christianity by exploring the Jewish roots of his faith. Over and over I heard people talking about finding the original Christianity, the one that most closely connected to what Jesus taught before it was changed, or corrupted by the Roman church.  It is well known that Constantine introduced rabid anti-Semitism into Christianity in the 4th century, together with a number of other changes that introduced pagan elements to Christianity.

As I reflect on these various conversations, with Jews who are trying to understand new developments in Christianity and with Christians who are trying to understand their connection to Judaism and to Jews, I realize that while the main goal of CFOIC Heartland has always been to connect Christians to Israel and specifically to Judea and Samaria, so much of what I am doing is far broader than that.  I am teaching Bible to Christians.  I am helping them understand how Jews read the Bible that we both share.  And I am there for them to answer their questions, about Jewish beliefs, customs, life-styles and values.

I have met Christian women who are struck by our customs of modesty in dress and who have adopted some of these styles, or who just appreciate the styles that we have adopted.  I have hosted Shabbat dinner programs for Christians, usually not actually on Shabbat, where I explain the religious and family values that underlie our Shabbat experiences.  I have no interest in convincing Christians to become Jews or even to adopt Jewish customs.  Not at all.  And I would never have taught on these subjects if I had not been asked to by Christians.  But what I am finding is how many Christians are looking to Jews for guidance and ideas as to how to combine faith with modern life.  How to find meaning in the crazy world we all share.

I realize that most Christians who support Israel are not looking to change their life-styles and that is just fine.  But I do believe that most Christians who support Israel are looking to connect to Israel and to the Jewish people in a deep and significant way.  We have our theological differences and we both need to respect those differences.  I have no interest in debating them in any way.  But there is something so beautiful in its innocence, so heartwarming in the fundamental change that we are witnessing in the history of Christian-Jewish relations over the centuries, that we cannot remain indifferent.

Thank you, my dearest Christian friends, for the journey you and I have been traveling on for more than 20 years.  We are making history.  I pray to G-d that He will give us all the strength and courage to follow this wonderful path for many years to come.