A Rose Among Thorns

I visited the community of Einav for the first time when I was accompanying a small tour group from Canada. The five of us were squished companionably into a small car, chatting easily about the land, only the smallest bit tired after a full day of traveling and visiting and touring. We drove along a narrow road that sliced through summer-dried hills and wound past exits flanked by menacing red signs that towered over us:

This road leads to Area “A”
under the Palestinian Authority
the entrance for Israeli Citizens is forbidden,
dangerous to your lives,
and is against the Israeli Law 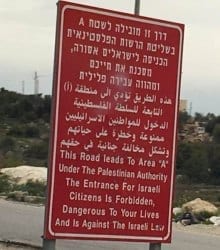 Small shivers ran down my spine as we passed within meters of these exits. I had not even arrived in Einav, but already my view of their security needs was abundantly clear. Surrounded as they were with hostile Arab villages that willingly walled themselves off from Israelis, I could only imagine the types of challenges the residents of Einav faced on a daily basis.

From my short visit in the community, I learned that Einav’s location makes it particularly vulnerable to infiltration and attacks from the surrounding villages and large towns, which are almost a literal stone’s throw away from the outskirts of the Einav. Perched as they are on a central hilltop overlooking these villages, Einav does command a strategic view of the area, but this is not enough to protect them in an emergency situation.

As I peered over the side of the mountain, my heart lurched just thinking about how terrifyingly easy it would be for a terrorist to sneak up and infiltrate this peaceful and flourishing community. Hostile Arab settlements hunch in the nearby valleys like bubbling concrete, dull, flat-topped buildings cutting the horizon into gray cubes. By contrast, the bright homes of Einav preside over greenery and growth, and laughing children at play run freely through the close-knit community. Einav is clearly a rose among thorns – blossoming, even while surrounded by threats.  (Song of Songs 2:2) 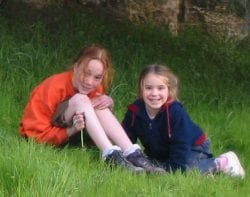 A place like this, so beautiful and yet simultaneously so strategic, must be protected. And the key to that protection is constant video surveillance. Einav’s rapid response security team is trained for crisis and always at the ready, but unfortunately their surveillance camera system is too under equipped to prevent a terror attack. Without high-tech cameras, the rapid response team is rendered useless – how would they know if there were an imminent threat if there was no way to see the attack before it reached them?

Einav already sits in a critically vulnerable location. When you add a lack of cameras providing constant surveillance from above into the mix, the security situation becomes dire. As I listened to the chief of Einav’s security explain the situation, my gaze roved over the temporary trailer housing organized into little courtyards and the stout permanent homes all bricked with Jerusalem stone. It dawned on me then: every resident of this community was at risk. And it’s up to us to protect them.

Leaving the beauty of Einav behind and returning home at the end of that day was very difficult for me. In just one afternoon, I’d fallen in love with the strong pioneering attitude of the residents, the winding roads and lush greenery and bright homes, and the magnificent sunset panoramas of Einav. It is a place so vital to the pumping heartbeat of the Biblical Heartland, and a place well worth protecting.

1 thought on “A Rose Among Thorns”