Becoming a Proud Woman of Israel

When I asked Yaffa to tell me about the girls she helps in Ofra, she had so many stories to tell, she had a hard time choosing.  As the coordinator of the Immigrant Program at the Ofra High School for Girls, she speaks of each girl with the pride and concern, and the adoration of a mother.  The Ofra High School has a student body of 900 girls, and within that large group is a small group of recent immigrants.  Through the years, many of them were from Ethiopia but now there are also immigrants from France, Russia and England.

Yaffa starts telling Shoshana’s story with the tone of voice that anticipates a happy ending! Shoshana came to Israel two and a half years ago from London. But her voyage started long before that.  She was originally from Russia and she and her family spent years wandering, to Poland then England and finally Israel.

Shoshana is one of nine children, the youngest of which was born during their time in London. The family had no connection to their Jewish heritage or any religious tradition. Only in London did people reach out to them and their search began.  But Shoshana went to a secular school abroad and she arrived in Ofra with little or no background in Bible, no knowledge of Jewish rituals and customs.  Faith was not even in her lexicon.

The Ofra High School knew just what to do and designed a personal program for Shoshana, tailored to her many needs. She had no Hebrew—though Yaffa makes sure to point out how bright she is, speaking Russian, Polish and English fluently! Shoshana started an intensive course in Hebrew language alongside classes on the basics and beauty of her religion.  The school has proven experience in providing intense immersion in Judaism and Zionism and in offering a fast track to “catching up” with their native Israeli classmates. 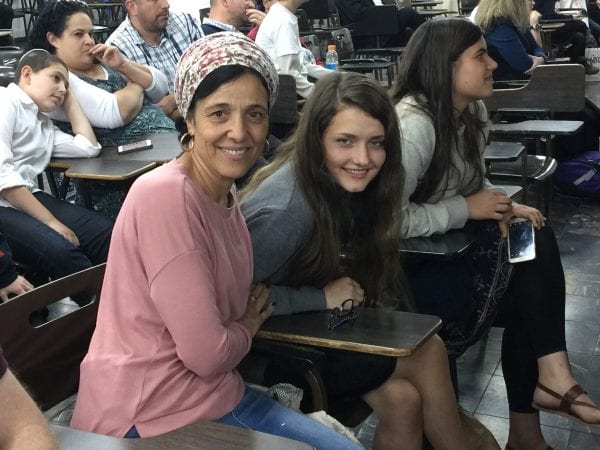 Shoshana with her loving counselor, Yaffa, at a school function.

Yaffa claims proudly that by the end of the year Shoshana was able to partly communicate with the other girls, due to her longing to succeed and a very high level of intelligence.  Her curiosity and her motivation were passionate and strong and everyone who met her was impressed with her good nature and her evident background of being raised by parents with strong values.

In tenth grade, Shoshana started attending some classes with her Israeli peers. The integration was hard for her.  The language, the pace, the cultural differences, the gap in knowledge.  Unfortunately, but understandably, she chose to escape rather than meet the challenges and she cut class.  Many classes. With the feeble excuse that she didn’t feel well.  School counselors recognized what was going on and took her under their care.  With great sensitivity and a tremendous amount of hard work, she was able to lift her head above water and study alongside her friends.  The extra tutoring helped and as she saw her grades improving, so did her health and her feeling of wellbeing.

Today, after finishing eleventh grade, she can see great accomplishment and achievement and has received impressive grades on her matriculation exams. It was the result of great effort on her part and on those who stood right by her, encouraging, teaching, and personally walking her through every challenge.  Her success helped give her the strength to continue and keep advancing

And there is more!  In March of this year, Shoshana was named Immigrant of Excellence for the year.  The Ministry of Education invited her to come to an impressive emotional ceremony to get her well-deserved award. 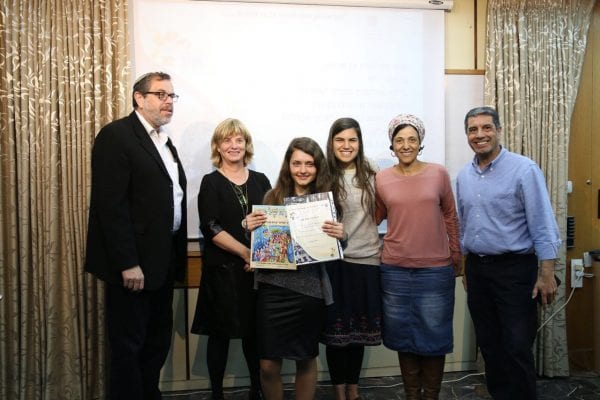 Shoshana, (3rd from the left), receiving the Immigrant of Excellence award, together with her school counselor and ministers of education.

Shoshana has also flourished socially.  She is pleasant and friendly and fits in beautifully with her Israeli peers.  She is no longer setting herself apart from her classmates and she is a welcome addition to the class.  What a wonderful change!!

Besides the challenges Shoshana faced in school, she also feels very responsible for what goes on at home.  Shoshana is very proud of her family.   With an understanding and maturity beyond her years, in the most natural and healthy way possible, she takes upon herself a tremendous part of the maintenance of the home and a significant part of the financial expenses.  All through the school year, with all the pressures of trying to focus on her scholastic demands, and throughout her vacations, Shoshana finds jobs, and works to help support her family.  She does it with the sweetest happiness, maintaining that there is no reason for her to be a financial burden on her struggling family.

The staff looked on, admiring Shoshana and wishing they could provide her with a more appropriate atmosphere in which to succeed.  Yaffa made sure she was integrated into a wonderful program called “A Warm Home”, where she found her own quiet corner (something she doesn’t have at home!) to study and get the help she needs. The Ofra High School also ensured that she receive government assistance through Youth Aliya, which provides funding for most of her tuition and dormitory costs, freeing her to take care of her and her family’s other needs.

Yaffa gets emotional when she speaks of Shoshana: “It’s simply a pleasure and a privilege to stand alongside a student like Shoshana and she is deserving of every praise.”

The Ofra immigrant students are extremely motivated, ready to take root in their new beloved homeland… ready to soar.  With just a little help from you, we can ensure that these girls become strong proud young women of Israel. 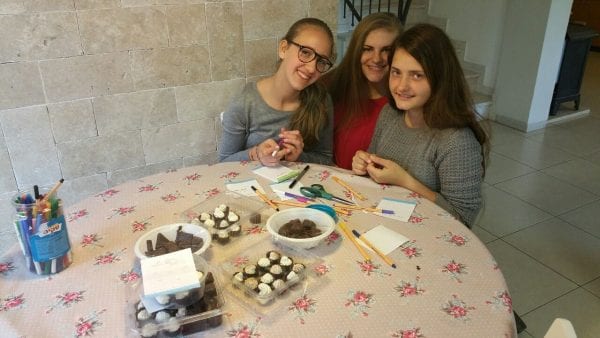 The three most recent immigrant students in the Ofra High School… Shoshana (on the right), from England, Rena, from the United States, and Arella, from France.