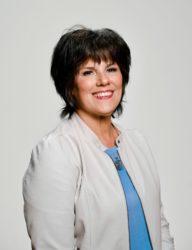 The journey towards God requires peeling many layers. Like an onion, as we peel each layer, the truth we uncover often brings tears to our eyes. Victoria recalls her journey to God as one of shedding layers and even tears, to reveal a life of humility, a commitment to God, and a love for God’s Land and People.

Today, Victoria James is National Outreach Director at Bridges for Peace, Canada, while her husband, Reverend Don James, is the Development Director for the organization. But this powerhouse couple did not always understand the centrality of Israel in God’s plan. Growing up in Chicago, Victoria had a superficial brush with Christianity, attending church only when her father, an accomplished singer, performed in one. As a young woman, she devoted herself to dance, but struggled in the cutthroat environment with its focus on “thinness”. Her spiritual journey began with her search for something beyond skin-deep but ended with God.

Enmeshed in the dance scene, Victoria turned to macrobiotics, which pulled her to Taoism, appealing to her physical and spiritual needs. However, as the pull of Taoist spirituality intensified, she abruptly abandoned her lifelong dance aspiration and fully immersed herself in macrobiotics. While in Canada for a short-term work opportunity, Victoria met her husband, the son of a Baptist pastor who dabbled in macrobiotics during a temporary disillusionment with the church. But, as Don reconnected with his spiritual path, Victoria found herself in a bizarre situation – she was married to a seminary student, but she had never before opened a Bible.

God worked quietly behind the scenes, patiently peeling away layers, bringing Victoria closer to Him, culminating in what she refers to as “a profound, life-changing encounter with the Father.” Years later, God
placed Israel on her heart: “I could not make this up. My 18-month-old daughter pulled me to the coffee table, opened a Bible, and placed my hand on a passage in Zachariah,” recalls Victoria. As she scanned the passage which ended with God’s assurance that He will once again comfort Zion and choose Jerusalem, Victoria felt confused. “As Christians, we are taught that everything in the Bible applies directly to us with no Israel context, yet this passage had nothing to do with me!” Even more bewildering was her sudden burst into uncontrollable sobbing, and repeated sobs whenever she encountered Jewish content. For Victoria, this was God answering her prayers to love what God loves. 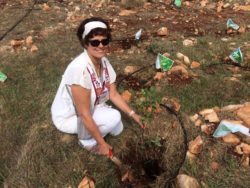 A chance encounter with Bridges for Peace on a Christian TV show opened a new world for Victoria, who knew nothing about modern Israel until then. She was introduced to their teachings and publications, and it all made sense, filling in the missing pieces and bringing new meaning to the Hebrew Scriptures. Years later, Victoria joined Bridges for Peace, where she had the opportunity to visit Biblical Israel

Reading about Hebron in the Bible did not prepare Victoria for the real thing. She could not miss the tour bus’s thick protected windows but had no context with which to understand the conflict in Judea and Samaria. As she stepped into the Tomb of the Patriarchs, James experienced the Bible coming alive, and it was there that she first learned of the city’s history, from Biblical times to the present. And it was there that she first met Sondra Oster Baras, CFOIC Heartland’s Director.

“Sondra told the story of the settlement movement in Hebron, sharing the story of a bright, young American college student named Chana who arrived in Hebron a few months after the 1967 War to help the group that had settled there.” Chana later helped establish Kiryat Arba. “Chana recalled her experience peeling endless potatoes and that struck me.” Chana had abandoned the promise of education and career to engage in seemingly mundane activities, and Victoria suddenly understood that all of this was a spiritual journey, of Chana’s and of the Jewish People, in obedience to God’s plan. 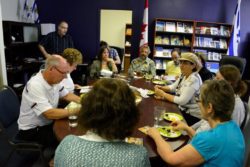 Victoria credits Sondra with giving her a richer understanding of the importance of Biblical Israel. Wanting to share this message, Victoria regularly invites Sondra to speak to numerous BFP groups both in Israel and in Canada and insists that each BFP Israel tour include at least one visit to a Jewish community in Biblical Israel and a meeting with Sondra. “CFOIC Heartland is very useful to Christians, helping them understand the Jewish communities’ legal, moral, and biblical justification to exist in Biblical Israel, while providing a conduit for Christians to help with financial support and increased awareness.”

Victoria’s message to fellow Christians is firmly based on verses from Ezekiel 36 and Isaiah 23:42: “As God has brought the Jews back home from the four corners of the earth, our job right now as Christians is to
heed His call and help them come home.”