The Glory of Children is Their Parents

For as long as she can remember, she experienced difficulty eating, trouble speaking, not to mention the blow to her self esteem, and the psychosocial ramifications of her condition. Ella Furman was born in the former Soviet Union, in 1947 with a cleft palate. Cleft palate is a condition in which the two plates of the skull that form the roof of the mouth are not completely joined, leaving an open gap in the mouth. Although cleft palate is a treatable condition, Ella’s family could not afford to finance the oral surgery she so badly needed.

As she developed from a child into a young woman leading a “typical” life would become harder for Ella. Between her disfigured appearance and speech impediment, there were many social obstacles she endured. But with her infectious personality, and wonderful wit, Ella overcame these socialization challenges. She soon married, and started a family of her own.

Ella and her family made Aliyah to Israel in the early 1990’s when the USSR opened its boarders and allowed Jews to leave the country. They came with the masses of Soviet Jews who sought a better, more meaningful life for their families in the Jewish homeland.

Upon their arrival in Israel, the Furman family moved to the Gush Etzion region of Judea, and together with several other like-minded families founded the community of Tekoa. After decades of religious persecution they were finally free to return to the land promised to their forefathers, to build their homes there, and to impart these Jewish values and a love of the land to their children.

Founding the community of Tekoa was only the beginning for Ella. She went on to be an active, contributing member of the community. Today, a senior citizen herself, she works with seniors, cares for her elderly parents-in-law, as well as a young grandchild. Her cleft palate condition has certainly not broken her, but throughout her entire life she has suffered pain, severe limitations on how and what she could eat, recurring infections and a host of other medical problems. Despite these enormous challenges, she has triumphed, and done so much to give to her community and the people around her.

Last year, the Gush Etzion Regional Council requested the assistance of CFOIC Heartland in helping several senior citizens finance special dental and oral treatments; Ella was one of these seniors. Thanks to CFOIC Heartland and CvI Holland, Ella is now undergoing dental procedures and surgeries that will close the cleft in the roof of her mouth. After a life of pain and discomfort, Ella will finally know relief.

Miri, a Gush Etzion social worker expressed it so eloquently: “Ella is a special woman—she has overcome so much, leaving Soviet Russia, acclimating to Israeli society, building a community in Judea, and she continues to give so much to those around her. Now we’re thrilled to be able to give her something in return, to alleviate the chronic discomfort she has endured her entire life.”

The first people to return to Judea and Samaria came to Biblical Israel in the early seventies as young, vibrant, idealistic pioneers. In the eighties and nineties there was an influx of Russian Jews, some were “Refuseniks” who escaped Soviet Russia, others like Ella and her family came after the Iron Curtain was lifted. Later, parents of the original pioneers came to live close to their children and grandchildren; some of these parents were themselves Holocaust survivors. Each wave of settlement in Judea and Samaria brought with it people who overcame so much to reach the holy land. Many of them spent their youth building Biblical Israel. Now they are aging and in need of services and activities to accommodate their needs.

CFOIC Heartland devoted its year-end campaign to senior citizens’ projects. The time has come to show our gratitude to this dear population, to thank them for all that they have done for us, to honor them for who they are, and what they have accomplished. “You shall stand up before the gray head and honor the face of an old man…” (Leviticus 19:32) The year-end campaign was a wonderful success! Thanks to Christian friends all over the world, seniors across Judea and Samaria are thriving. 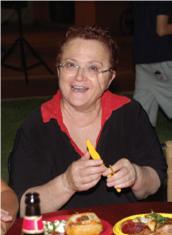 Senior centers in Barkan, Efrat, Fazael, Kedumim, and Maale Ephraim, as well as a seniors club in the Jordan Valley Community Center, benefited from CFOIC Heartland’s recent campaign. We have also provided assistance to needy seniors in Gush Etzion to pay their heating bills during the recent bitter cold winter. The seniors and their families are all so appreciative of what we have done for them! Mayor Oded Revivi of Efrat, was especially grateful for CFOIC Heartland’s assistance in purchasing much needed equipment for their senior citizens center: “We deeply appreciate your efforts and are very grateful to you and our Christian friends for your support and