Join Sondra Oster Baras and Danny Ehrlich on a journey to Maale Shomron, a small community founded on historical and Biblical ruins in the heart of Samaria

After the Ninth of Av
On: Jul 22, 2018
By: Elyshia Johnson
In: News from the Land, Newsletters 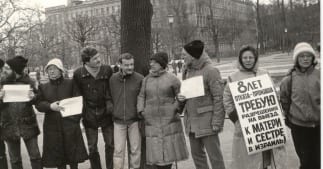 From Saint Petersburg to Kedumim
On: Jan 22, 2018
By: Kim Troup
In: Reflections from Israel