Last week a Muslim terrorist opened fire and murdered four innocent civilians at the Jewish museum in Brussels.  It was Shabbat afternoon and two of the murdered victims were Israeli Jews — a couple who were touring  Belgium.  Their two daughters were home in Israel with family and after the attack on Saturday, were left orphans.

Yesterday, Belgian and French authorities announced that the terrorist had been caught.  His name is Mehdi Nemmouche, a known Islamist radical French citizen who had spent a year in Syria assisting the Islamist rebels in their fight against Assad.  Authorities had him on their watch list and before enlisting in Jihadist activities, he had been arrested and had served time in prison for criminal activity.  But his capture was the result of a routine customs check as border officials were searching for drugs.  They were astounded to discover a Kalashnikov rifle as well as other weapons and ammunition in his bags.  But most incriminating was a film that he made in which he took responsibility for the attack on the Brussels museum.

Just over two years ago, in March of 2012, a terrorist named Mohammed Merah attacked a Jewish school in Toulouse, France, murdering three young students and a teacher.  Like Nemmounche, Merah had been on a watch list by authorities after returning from Afghanistan where he had participated in jihadist activities.  But, despite the warning lights raised by his involvement in Afghanistan, this tragic attack on innocent Jewish children was not foreseen and Merah was not stopped.

In April 2013, two Muslim terrorists planted a bomb at the Boston Marathon, killing 4 people and injuring hundreds of others.  Their names were Dzhokhar and Tamerlan Tsarnaev, of Chechnen descent and Tamerlan  had recently returned from Dagestan, another Muslim republic near Russia.  Following his return, the Russian authorities alerted the FBI that Tsarnaev had become involved in radical Islamist activity.  But that warning failed to prevent the terrible attack in Boston.

Three terrorist attacks, two in Europe and one in the US.  In all three cases, the perpetrators were known Muslims who had been radicalized and were on watch lists as possible terrorists.  But in each case, they were able to carry out their murderous plans unhindered. 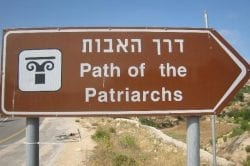 Just a few days ago, on Shabbat, my son was walking with a friend along the Path of the Patriarchs, the very road that Abraham traveled on with Isaac from Hebron to Mt. Moriah.  Today, you can see the remains of milestones and ancient ritual baths dating from the Second Temple period along this trail.  As my son walked the trail, he noticed what looked like hikers up ahead.  But instead of taking the usual path, they turned off onto what appeared to be an alternative return to the community of Alon Shvut.  Figuring that these hikers had discovered a short-cut,  my son and his friend followed.  Shortly afterwards they came upon a vineyard and as they were looking for the continuation of the path, they suddenly caught up with the hikers they had been following, only to discover they were not hikers at all.   They were radical left wing anarchists, together with Palestinian activists.  Cameras in hand, they started to accuse my son and his friend of trespassing.  They tried to provoke my son to violence all the while rolling the cameras.  But my son was not going to be pulled into their trap. He smiled at them, wished them a Shabbat Shalom, turned around and left.

While the group in the vineyard were not terrorists, they are part of the same war that is being fought against Israel and against the Jewish people in Israel and around the world.  Just a few days ago, I received an email from someone I have never met, accusing me of stealing other people’s land and seeking to murder Palestinians.  We often complain about the bias in the media but the hatred and lies that run rampant on the internet is far more virulent.  Who are these people, I keep asking myself, who believe such terrible things about us?  How can we even fight against these people when their lies are so pervasive and their accusations so insidious?

There is a global jihad movement and I don’t believe it is taken seriously enough.  When an attack happens, the authorities rush to the scene and a massive manhunt will be mounted until the terrorists are apprehended.  But by then it is too late to prevent the attack and innocent people are murdered.  But it is time to realize that we are in a global war against people who will stop at nothing to destroy everything we hold dear.  Young men leaving the US or Europe to spend time in Afghanistan, Yemen or Syria are and should be suspect for they are traveling to countries which have become breeding grounds for terrorists and jihadist radicals. Putting them on a watch list will not save any lives if they are not apprehended before they can wreak their havoc.  And  the anarchists who are provoking conflict between Jews and Arabs in Israel need to be apprehended as well before their “pranks” become terrorist attacks.

When did Israel become the target of so much hatred?  It didn’t used to be like this.  But anti-Semitism has entered a new phase and people all over the world are obsessed with murdering Jews and destroying Israel.  But they are not just targeting Jews.  They are a danger to all those people who are kind and thoughtful, who cling to the values of truth and justice.  We like to believe that truth just needs to be revealed in order to be accepted, but some people are not interested in the truth.  They just want to hate.  And they must be stopped before their hatred kills more innocent people!