Sharing In The Joy at an Israeli Wedding 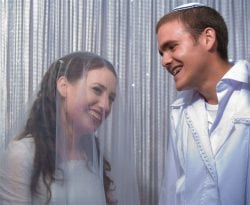 A major high-light of my recent trip to Israel was being a guest at the wedding of Sondra Baras’ youngest son. As anyone who has talked to Sondra in the past year knows, this was the event of the decade for the Baras family! Let me explain. When I first met Sondra in 1998, her oldest son was about 17, and I remember having a conversation with her then about how much she was looking forward to dancing with her sons and daughter at their weddings. Time has gone by and she has been kept waiting in suspense for years for her children to meet that special someone. For Orthodox Jews it is a holy thing to marry and they recognize that marriage 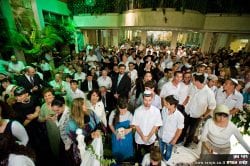 is the ultimate “mitzvah” (good deed). When I got the phone call telling me about the engagement, I rejoiced. I knew how long Sondra had been waiting for this moment! And I felt privileged to be a part of this very special time.

The first thing I felt as I walked into the wedding hall, was a tangible cloud of joy that permeated the entire place. This was a joyous event, yet at the same time, it is also a very sacred and holy occasion. There was this dynamic combination of euphoria tempered with holiness and radiating faith. 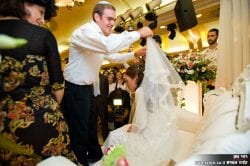 As I entered, the hall the bride and groom were in separate rooms mingling with guests, receiving “Mazel Tov”  (congratulations), and being treated like a King and Queen. There came a time when the hors d’oeuvres were finished that I heard the sound of singing. A large contingent of singing and dancing men whirled into the main hall — they were bringing the groom to veil the bride. For this groom it was the first time he had seen his bride in a week! (Most Orthodox Jews maintain the 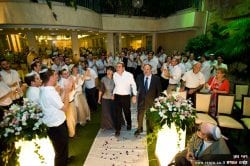 tradition that the couple does not see each other at all the entire week prior to the wedding.) It was a magical moment to see the look of enchantment on the groom’s face as he beheld his beloved in all her glory, with her stunning dress and her beautiful countenance.  Sondra and her husband Ed, then led the groom to the Chuppa (the wedding canopy) accompanied by the same singing and dancing men, while I waited with the women for the bride’s turn to be danced to the Chuppa. 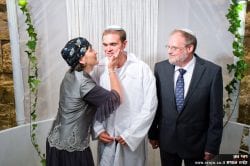 The next time I saw the groom he was standing under the Chuppa, with his mother and father, waiting for his bride. The crowd parted and she approached the Chuppa led by her mother and father with great dancing and celebration among the crowd. The couple stood under the Chuppa, with their parents at their sides, and the Rabbi before them. There were seven blessings prayed over the couple by the Rabbi and others who the families wished to honor. Even though the entire ceremony was in Hebrew, and I could not understand a word, I found this to be one of the most significant moments. To hear these seven people speaking a blessing over the couple, investing in them spiritually, was very powerful. I could feel the connection everyone in the room had with the couple, an unspoken promise to nurture this new addition to the collective Jewish family.

Once the ceremony was finished and the groom smashed the symbolic glass, the room erupted with shouts of “Mazel Tov”. The bride and groom were then escorted by a crowd of their close friends to a room, where they shared their first moments as husband and wife in privacy. For most Orthodox couples this is the first time they touch one another. It is considered immodest for men and women who are not related to touch, so they don’t hold hands, much less hug or kiss until the wedding vows have been said. While the bride and groom were in their room, the rest of the party started to eat! This was a joyous time of celebration and good food is an absolute must, no dieting allowed. 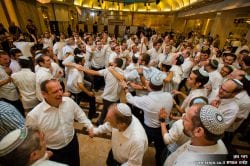 When they were ready, the bride and groom returned to the wedding hall and the dancing began. If you have never danced at an Israeli wedding, it is hard to convey the atmosphere. Once again, indescribable happiness and joy, mixed with an attitude of reverence and faith emanates from everyone present. I’m told that Israeli weddings are more exuberant than American Jewish weddings. My guess is that it is because life in Israel is uncertain, you never know when the next tragedy will strike, so they live with constant reminders of the fragility and preciousness of life. When they  celebrate, they really celebrate! They live in this moment of joy with every fiber of their being. They dance with a feverish intensity, and I danced with them until I had to catch my breath and ease my aching muscles. You can’t help but be swept along with the flood of happiness that fills the room.

The greatest feeling that I experienced at this wedding was one of faith. The faith the Jewish people have held onto for thousands of years by observing the words of Torah. They have put their trust in the G-d of Israel, the G-d of Abraham, Isaac, and Jacob, the I AM, and He has been faithful to preserve them. He has brought them out of captivity and dispersion, and returned them to the land as He promised. Because of His faithfulness, they have faith to face whatever sorrow or joy tomorrow may bring.

Mazel Tov Mr. and Mrs. Baras and may there be more Baras weddings soon!