Irving Roth survived Auschwitz, a death march, and Buchenwald as a teen-ager, and I was recently privileged to spend a weekend with him and his wife. Today he is a sweet and funny 90-year-old man, who shares his experiences in the hopes of making the world a better place and ensuring that “Never Again” is far more than a slogan.  It was important to me that my children, ages 14, 12, and 9 would meet Mr. Roth and to hear his story personally.  I wanted to make sure that they understood that the Shoah is not fiction, nor an exaggerated story someone made up. It was a real historical event that happened to real people, whose only crime was being Jewish.  I realized that by the time they are my age, they will not have another opportunity to meet a Holocaust survivor.

As I spent time with him, I was filled with a new appreciation for his generation. They overcame incredible obstacles, and were eye-witness to so many miracles. The nation of Israel was created on May 15, 1948, just three years following the liberation of the death camps in Eastern Europe. So many of the original Israeli pioneers were survivors who had nowhere else to go and no home to return to. They followed the prayer and dream of 2,000 years and returned to Zion.  They founded the modern State of Israel in their ancient homeland, just as God had promised they would.

Many of those same pioneers who founded the State of Israel, also accepted the challenge to build Jewish communities in Judea and Samaria. When Israel won the Six Day War in 1967 and the Biblical heartland once again came under Jewish control for the first time in 2,000 years, they could not sit idly on the sidelines. As Abigail, an 80-year-old Shoah survivor and original founder of the Neve Zuf community told me, “We won’t sit here and say ‘we’ve done our part, it’s someone else’s job to settle the barren mountains of Judea and Samaria.’ There is more we have to do.” They jumped at the opportunity to fulfill the ancient prophecies and see the Mountains of Israel come alive again, to see the cities rebuilt, and the streets filled with children laughing and playing.

Today these same pioneers are fulfilling yet another prophecy, one that we are inviting you to take part in.  Thus says the Lord of hosts: Old men and old women shall again sit in the streets of Jerusalem, each with staff in hand because of great age.  And the streets of the city shall be full of boys and girls playing in its streets. Zech 8:4-5  Hitler did all that he could to ensure that prophecy would never be fulfilled, but God never forsakes His Word and He always keeps His promises.  Today, I am asking you to make a sacrificial gift to bless senior citizens, like Abigail, living in Judea and Samaria.  Anything that you can give will be used to build up Zion, to stand with cherished senior citizens and to thank them for all that they accomplished to secure the land for generations to come.  Thank you in advance for joining me as we love them unconditionally.

I pray you and your family have a blessed holiday season filled with wonder, joy, and memories.

P.S.  Today, I am asking you to make a sacrificial gift to bless senior citizens living in Judea and Samaria.  Your gift is fully tax-deductible for the 2019 tax year in the USA as long as it is postmarked or received by December 31, 2019.  I pray you’ll join me as we bless Senior Citizens, many of whom are Holocaust survivors, with the help they need during their twilight years. 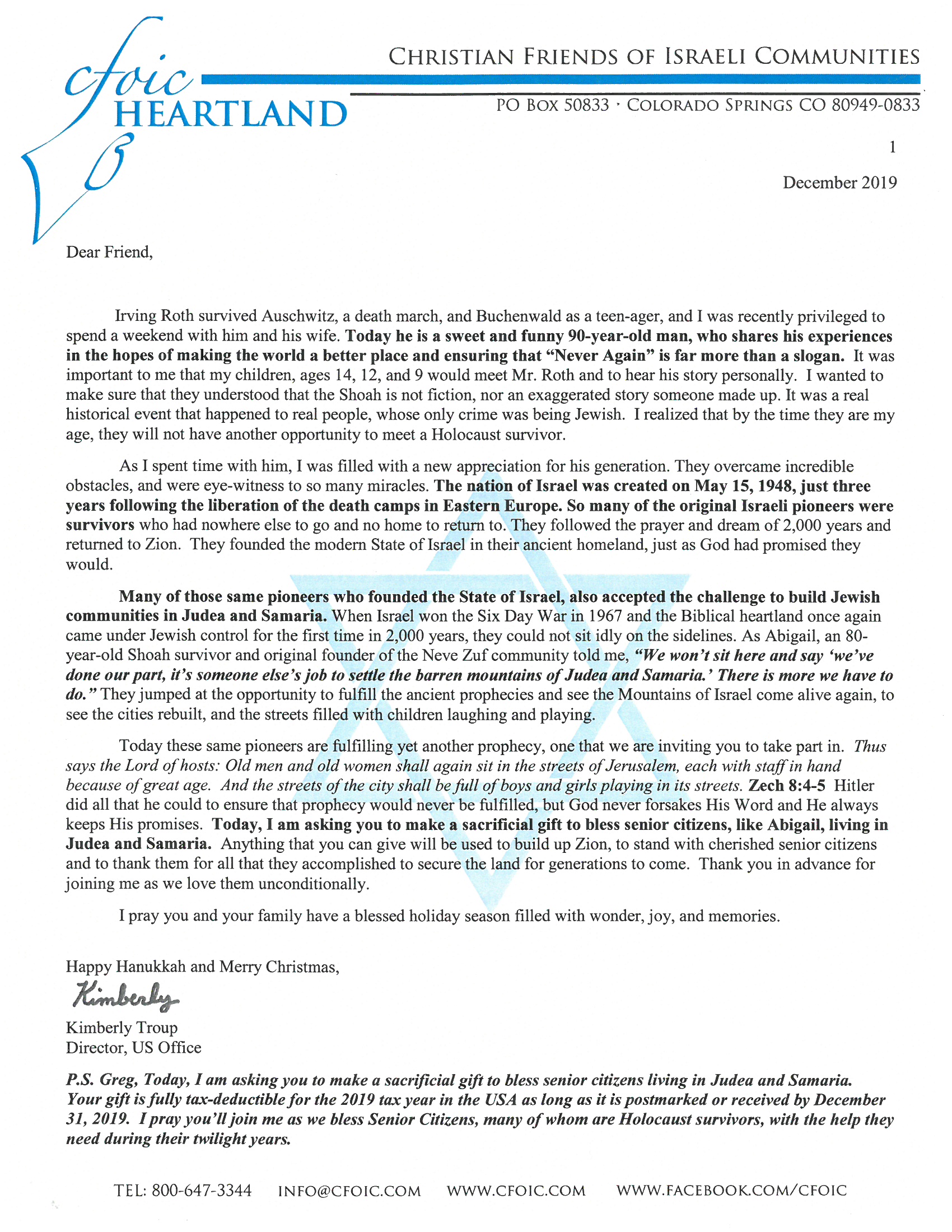