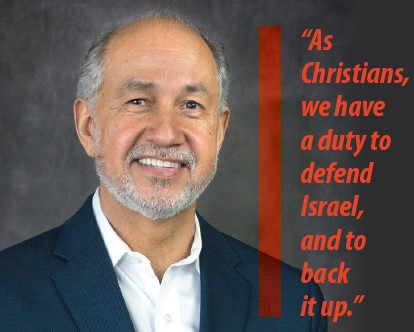 In the Bible, God used dreams to communicate His will. Today, when Believers are moved by an inspiring dream, they seek wisdom in interpreting their dreams. In the case of Pastor Roberto Miranda, a divinely inspired dream had far-reaching impact on his life, his church, the city of Boston and Biblical Israel.

Pastor Roberto Miranda has been the pastor of Leon de Juda (Lion of Judah), in the city of Boston for the past 37 years. Born in the Dominican Republic, as a child, Miranda immigrated to the United States with his family. Like many immigrants, Miranda’s parents dreamed of a better future for their children. Pastor Miranda’s story illustrates the power of dreams and faith-shaping reality. Although he had always felt a strong calling to serve God, Roberto Miranda’s passion for literature led him initially to an academic career, where he sought to answer God’s calling by infusing Christian values into his teaching and writing.

But God had a different plan. Soon after arriving in Boston to pursue a master’s degree in Romance Languages and Literature at Harvard University, he became deeply involved with a fledgling Hispanic church, initially as a lay leader, and later as the church’s pastor. In 1992, a mystical dream critically impacted the nature of his ministry: “It was a divine calling to battle the ravages of demonic influences.” Inspired by the vision, Miranda renamed his church Congregation Lion of Judah, and relocated it from affluent Cambridge to a crime ridden Boston neighborhood. The new name sought to honor Jesus while expressing the church’s deep love and identification with Israel. Miranda derived two messages from his dream: play a leadership role in Boston and develop a profound relationship with the people of Israel. But while he clearly understood what must be done to accomplish the former, he was not sure how to get involved with Israel.

Pastoring comes naturally to Miranda and the church blossomed under his leadership. Currently, it draws 1,500 worshippers from diverse backgrounds, supports ministries in both Spanish and English, with several associate pastors, including Miranda’s wife Mercedes, on staff. As one of Boston’s largest and most influential churches, Lion of Judah’s work has transformed countless lives by assisting immigrants, mentoring inner-city youth and encouraging them to attend college (a first for most of their families!), and combatting drug abuse. 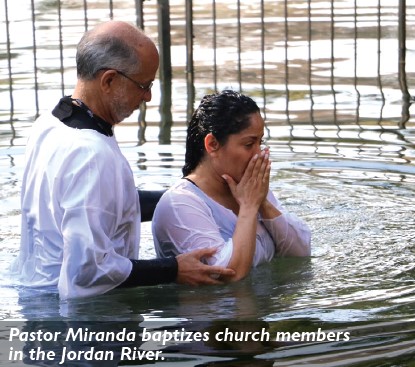 It took Miranda a bit longer to chart the path towards Israel. His first visit to Israel, in 2003, was short with minimal touring. When he returned to Israel a few years later, Miranda spent a significant portion of the trip at a monastery in the Negev, fasting and praying: “It was a transformative spiritual experience!” But it was his third trip to Israel, with Christians and Jews United for Israel (CJUI) that illuminated the Israel component of his mission. Miranda explains that “with each visit, I felt Israel open itself up to me, revealing greater insight.” The CJUI trip included meetings with Israeli journalists, Knesset members, IDF commanders and university professors. One speaker was Sondra Oster Baras, CFOIC Heartland Director, who introduced the audience to Judea and Samaria.

In 2011, Miranda attended a CFOIC Heartland meeting in Newton, MA, where he heard Sondra speak again, providing him with additional insight into Israel. Subsequently, he began to preach a theology of love for Israel and to host regular Israel events at the church. In 2014, Sondra addressed the Lion of Judah congregation for the first time and Miranda subsequently organized the first of several Israel church trips. Each trip included a visit with CFOIC Heartland and a visit to Biblical Hebron. 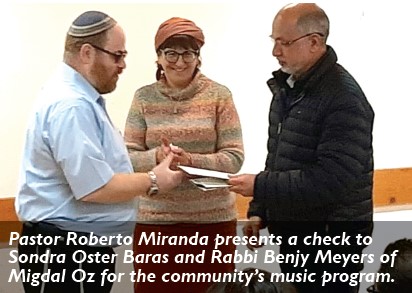 The combined impact of visiting the Tomb of the Patriarchs, with Sondra’s subsequent visit to the church in 2018, crystallized a new perspective for Pastor Miranda. He realized that “the presence of Jewish pioneers staking a claim to their God-given land in Judea and Samaria is vital to defending important Biblical sites,” and consequently understood that supporting Jewish pioneers in Judea and Samaria would strengthen his church’s relationship with Israel. In 2019, Miranda’s church undertook a project in Migdal Oz, a community in Gush Etzion, Judea. And in early 2020, just before COVID hit, Pastor Miranda and his large church group visited Migdal Oz, proudly presenting their donation to support a music program to community members.

Pastor Roberto Miranda knows his Israel mission has only just begun and never tires of preaching support for Israel. While eagerly anticipating a future visit, his church continues to host annual Israel events. “Jews are a divine wonder, a jewel in humanity’s crown,” he declares, and calls on Christians to join him: “As Christians, we have a duty to defend Israel, and to back it up.”