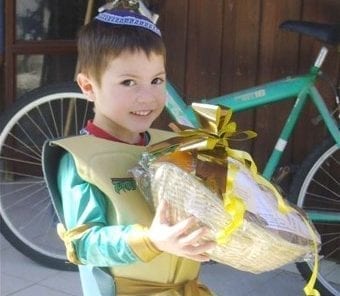 Rejoice in the Relationship

When I was very little, my father took me outside on the eve of the first day of Adar, the Hebrew month in which we celebrate the holiday of Purim. Evening was a deep blue bowl studded with glittering stars. We stood there on the driveway and he pointed up at the moon, which was only a thin crescent, its points facing straight up like a smile. “Look at that,” he said. “Even the moon is happy this month!”

On the holiday of Purim, we read the Book of Esther, which chronicles the dramatic story of the Jewish People narrowly escaping extinction at the hands of the tyrannical King Ahasuerus and his conniving advisor Haman. At every turn, the Jewish People seemed to think that God had abandoned them, but in actuality He was still with us at every step, quietly influencing the turning of events so that we would be sure to survive. God caused Queen Esther, a Jew, to be chosen as the bride and queen to King Ahasuerus; from her new position, she was able to expose Haman’s evil plot and ask the King to save her people. Mordechai, Esther’s cousin, overturned an attempted assassination against the King, earning his trust; when he later came to suggest that Haman be hanged on the very same gallows that had been built for Mordechai, King Ahasuerus was only too happy to oblige.

At every step, God was with us, pulling the strings.

In Chapter 9 of the Book of Esther, it is written that we should celebrate Purim throughout “the month that was reversed for them, from grief to joy.” An entire month of celebration is called for, to commemorate God rescuing our nation when we were at our lowest. But of all our holidays, why Purim?

Compared to all other Jewish holidays, Purim is unique. Purim does not celebrate redemption, a huge miraculous phenomenon, or a glorious victory. Instead, Purim celebrates the fact that no matter how low we sink, no matter the trials we are facing, God will always be there with us. It is so much harder to maintain a relationship with God when we are going through a hard time, but what we have to remember is that that relationship still exists. God isn’t going anywhere.

Purim celebrates the perpetuity of that relationship. It reminds us to be celebrate. Be happy! Rejoice in your relationship with God! This is the time to remember that no matter what we may be struggling with in our personal lives, God is there for us, and He always will be. And that is definitely something to be happy about.

You can be there for a special needs child during the upcoming Passover holiday. Your gift today will enable them to experience fun excursions just like their siblings during the school break which provides their parents with a much needed respite, knowing they are being well cared for and they are having the time of their life!