People in My Neighborhood: Shalom

He’s our car mechanic.  His garage is conveniently located in the Industrial Area right outside Karnei Shomron.  But Shalom is also my neighbor, his house on the block parallel to mine.  Shalom is an interesting personality.  When you go to drop off your car, you may get an earful of male chauvinism, with an insistence that he probably won’t be able to explain the car’s problems to a mere female.  With no patience for small talk, he always has time to tell a mildly risqué and usually clever joke from his repertoire. His manner is gruff, his language even crude at times.  He has very strong and not necessarily politically correct opinions about everything, from politics to different ethnic groups, and he insists on sharing them, loudly and strongly.  And yet, his employees are mostly Arabs and the same employees have been there for years.  Their relationship is one of honesty, straightforwardness, and mutual respect.  And the man knows his cars.

And he’s also a tzaddik, what we call in our religion a “righteous person”.  Perhaps not the typical looking tzaddik.  All week long he lives in jeans and work shirts and his hands are usually stained with grease.  But we have righteous men among us who don’t necessarily dress the part, but do play the part.  He doesn’t actually use spit and chewing gum to hold parts together, but people laugh (and I am among the chucklers) at his sometimes unorthodox way of doing repairs.  But he does it to save people money.  When my husband was out of work and our car kept breaking down, Shalom, in his unassuming way, helped us out. He offered us less expensive options and time-saving alternatives to push off larger outlays.  And on more than one occasion he charged us solely for the cost of parts, shrugging us off when we pointed out that he wasn’t getting paid for his time and talent.

Sometimes, I do a double take when I get a glimpse of the complexities in this man.  One day, I had dropped my car off at his garage and he offered to drive me back home, because he needed to go to my neighborhood anyway, to pick up another customer’s car.  As I opened the door to get into the car, he scooped up a pile of papers and books on the front seat next to him.  I noticed a book on Physics and asked him about it.  He told me that Physics was one of his first loves. He reads Physics texts for fun.  Shalom told me that the local boys’ yeshiva high school had once needed a substitute physics teacher and he happily filled in, insisting on not getting paid, thrilled at the chance and the challenge to get the boys excited about science. Which he did.

On that short ride back to our neighborhood, I complained that taking care of my car had made me late for my weekly class with our community Rabbi.  I told him that I look forward to the class all week and make sure to never make an appointment that conflicts with the hour.  He asked abruptly, “What are you in the middle of studying”?  I told him that for the past month we were learning about the ancient religious rulings of Rabbi Gershom.  Shalom, immediately, and with no introduction or preparation, proceeded to give me a fascinating lecture about Rabbi Gershom, offering me insights into the man which I never would have known.  He dropped me off outside the Rabbi’s house, but I remained in the car until his mini, impromptu class was over.

Shalom is very learned and well read.  Years ago, I received a memo from my local synagogue that there would be a new lecture series in the evenings about Rabbis and scholars who had written commentaries on the Bible and on the Talmud.  I went to the first class and who was standing at the pulpit?  Shalom.  He spoke for an hour, and not for a moment did my attention wander.  He spoke concisely, clearly and without any notes in front of him, making the time period, the history and geography of the subject of the class come alive with details and stories that remain with me still.  He’s told me that if he thought he could make a living from teaching, without having to go back to school, he would.  The man is always able to surprise me.

He has said, on more than one occasion, that his family and his religion are the two most important 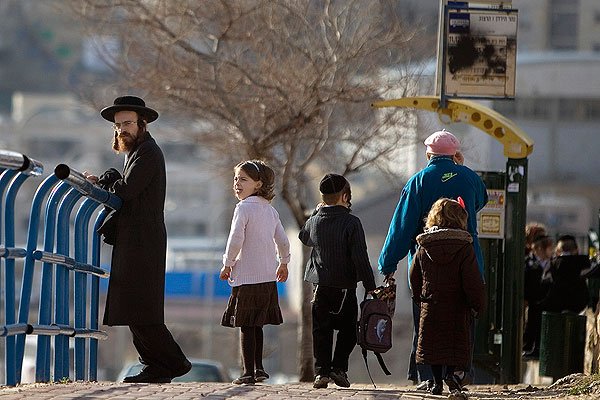 facets of his life.  His five children are all grown and are some of the truly nicest, most well-mannered and well-spoken children in our community.  He and his lovely wife have raised them to be true tributes to them and the Torah’s ways.  Shalom has many grandchildren and it is a joy to watch him walk down the street on Shabbat, in suit and tie, his white Shabbat shirt crisp and fine, his face simply twinkling with the pride in his progeny.  He is very involved in our local synagogue and has often taken upon himself the unpaid (and usually thankless) position of manager for his prayer service. He does his job with his usual brusqueness and volume, but his dedication and love for the institution is clear. His absolute unpretentious modesty about his good deeds and knowledge are an interesting companion to his brass loudness.

Shalom is anything but typical.  He moved to Israel from Brooklyn, New York, in order to raise his family in the Biblical Heartland.  So he was not born an Israeli, but there is something of the Sabra about him, the cactus fruit which is used to describe native-born Israelis.  Coarse and prickly on the outside and soft and sweet within.