People in My Neighborhood: Meet Albert 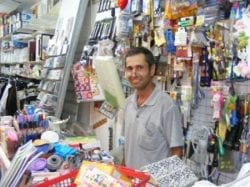 I went to our neighborhood’s Li’V’Lach store yesterday to buy chalk for my grandson’s new blackboard. A handful of people were standing around the locked door, waiting for Albert to arrive and open for business. It was 20 minutes past opening time but nobody seemed annoyed. It’s very hard to be annoyed with Albert. His familiar van pulled up and he and his wife Tzvia stepped out, welcoming everyone with a hearty “Boker Tov” (Good Morning”) as they began to unload merchandise.

The door is opened and everyone makes their way up the indoor flight of stairs, careful not to upset things hung and placed on both sides, making the steps feel even narrower than they are. We pass shower curtains, potato peelers and spatulas on the left, and flour sifters, juice pitchers and drain plugs on the right. Albert switches on lights, encouraging us to notice the new sneakers he has piled at the entrance.

Li V’Lach, meaning “For Me and for You” sells everything from clothing and shoes to electrical appliances and linens to school supplies and toys. This Mom and Pop store is run by a very special couple, and though the store may seem crowded and disorganized, they truly have everything, and, as Albert is known to say, “If we don’t have it, I can get it for you by Tuesday!” And what’s remarkable, he usually can and does. In any size, color and model number, and usually of better quality and price than the big stores in nearby towns.

Albert is a man with a huge heart, offering merchandise and service with his tireless charm. If you bought a pair of sneakers and the seam starts opening before it should, he’ll take them home and get them sewed up for you. If your new phone battery doesn’t work, he’ll take it home to check it, charging it up for you overnight. My son Avraham needed an extra hole put in his belt and Albert happily took out his leather puncher from the treasures he keeps behind the counter, took the time to measure exactly where he wanted the new hole and punched it for him, asking him why he lost so much weight. Every couple of months, Netanel and Elitzur take our collection of basketballs and soccer balls and bring them to Albert. He takes out his air pump and gladly fills the balls with air, making sure to ask the boys how their games have improved! 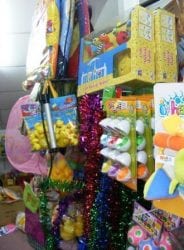 e in to spend 2 shekels or 2,000 shekels, you get the same royal treatment, the same big smile and the same hearty welcome and good-bye. One year, Elitzur was dressing up for the Festival of Purim as a magician. He had the cape, the top hat and the magic wand. All he needed was a couple of magic tricks to keep up his sleeve. Of course Albert had a selection and Elitzur finally chose a small, plastic disappearing-coin trick. It cost two and a half shekels, and we waited on the long line, snaking around the store, in order to pay. We finally got to the front of the line and Albert gave an excited, “Aaah! I see we have a new, young magician here! Do you know how to do this trick?” We assured him we did, but Albert opened the cellophane wrapping, took out a coin from his pocket and asked Elitzur to show him. The line was long; it was hot and stuffy; people were holding their bulky purchases in their arms. But everyone waited and everyone watched as Elitzur made the coin disappear and reappear. Albert gave him a manly pat on the back and there was even a smattering of applause. And somehow, everyone on line was smiling!

A few years back, my daughter, Leora, was the director of Karnei Shomron’s summer day camps. She had put in an order for supplies with Albert and got a phone call that everything arrived. She came to pick things up and noticed that the store was unusually busy and offered to come back another time to go over the order. Albert said, “Nonsense, nobody minds waiting! After all, what you are doing is holy work. You are dealing with the education of our children… our country’s future… is there anything more important than that?” So everyone waited as Leora read off each item on the list and Albert carefully totaled the bill and put each package of markers, construction paper, pipe cleaners and water guns into bags. And Leora left with murmurs of “good luck” and “thank you” from the waiting customers.

Albert is not an Orthodox Jew but is well-connected to tradition and exudes a love for the Jewish faith. He gets a kick out of making sure he stocks the right clips that Elitzur uses to keep on his “kippa” (skull cap) and gave me a good hint about how to launder my sons’ traditional fringed garment, while protecting the delicate strings by stuffing them into a clean sock. According to Jewish tradition, new dishes and glasses need to be immersed in a ritual bath, so Albert built one outside his store, open for anyone to use, free of charge, whether you bought the items at his store or nor. And he posted the traditional blessing over the bath. Every Friday, there are leaflets and pamphlets distributed by different organizations, filled with commentaries and lectures on the Torah portion of the week. You can find these at every synagogue in the neighborhood… and at Li V’lach! Somehow, Albert’s Li V’Lach store spreads Judaism and a love of G-d. Every Jewish holiday season is an event with Albert. Before the Feast of Tabernacles, the store makes room for Sukka booth decorations; before Hanukkah there is an array of the traditional spinning tops and menorahs; weeks before Purim, Albert squeezes racks of costumes and accessories into the aisles; Israeli flags in all sizes hang from the ceiling in time for Independence Day. And all year round, the store is the place to go for all our Jewish needs: skullcaps, prayer books, Shabbat tablecloths…

One Shabbat afternoon I was studying the Book of Numbers with my sons, and we got to Chapter 20 where Moses’ brother Aaron dies. And verse 29 reads, “When the entire assembly saw that Aaron had perished, they wept for Aaron thirty days, the entire House of Israel.” Elitzur said he learned in school that Aaron was mourned by everyone, men and women alike, because Aaron pursued peace and extended himself to bring harmony among his neighbors. Netanel pointed out the verse from Proverbs 3:4 that could describe Aaron, “Then you will find favor and approval in the eyes of God and humanity.” And then they both said, “Just like our Albert!”

Albert, you are loved. We are proud to have you as part of Karnei Shomron.