These past two days have been a roller coaster of emotions. Monday was Israel’s Memorial Day for Fallen Soldiers and Victims of Terror. Every school, every city, every 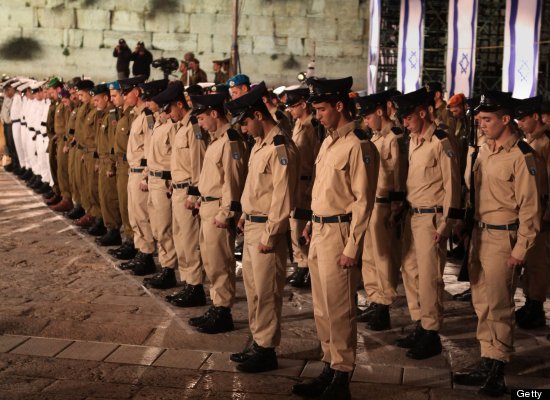 small community, had a ceremony commemorating the country’s heroes — those who fell in the battlefields of our endlessly long list of wars, and those who fell because they were walking on the wrong street, riding the wrong bus, guarding the wrong mall, standing outside the wrong pizza parlor, when a terrorist decided to strike out and destroy. Sadly, every one of those schools, those cities and communities has lists of their own: Classmates, colleagues, neighbors and brothers. The ceremonies began at 8 P.M. at night, with a minute-long siren that pierced the air and our hearts as we stood in painful, respectful silence. The next morning, at 11 A.M. the siren wailed again, catching people at work, at the market, driving along the highway. Computer screens were dimmed, grocery wagons pushed aside, and car ignitions turned off, as everyone stopped and stood at attention. The country shut down as everyone spent their afternoons visiting their loved ones at local and military cemeteries.

And then, last night, as night fell, the parties began! Memorial Day ends with the start of Israel’s Independence Day. There is no chance to change moods, to find the strength to celebrate. Independence Day’s back-to-back placement with Memorial Day is a harsh, but necessary juxtaposition of what life in Israel is about. Our Independence Day—our celebration of our State of Israel must be seamed so closely with Memorial Day, for without the selflessness of our fallen heroes, we would have nothing to celebrate. The Jewish people of Israel understand the reality of living in this incredibly wonderful, always complicated country.

These two holidays make me think of two marvelous, short prayers which are said from the pulpit during every Shabbat and festival prayer service. The first one I find myself connecting to our Memorial Day for Fallen Soldiers and Victims of Terror and it is called “The Prayer for Protection of the Israel Defense Forces”. Today I am including the full text because it is short and its words so simple yet so priceless:

May He who blessed our forefathers Abraham, Isaac and Jacob — may He bless the fighters of the Israel Defense Forces, who stand guard over our land and the cities of our G-d, from the Lebanese border to the desert of Egypt, and from the Great Sea to the verge of the wilderness, on land, in the air, and at sea.

May the Almighty cause the enemies who rise up against us to be struck down before them. May the Holy One, Blessed is He, preserve and rescue our fighters from every trouble and distress and from every plague and illness, and may He send blessing and success in their every endeavor.

May He vanquish by their means those who hate us, and may He adorn them with a crown of deliverance and a mantle of victory. Thus may the verse be fulfilled: ‘For it is the lord your G-d who marches with you to do battle for you against your enemy, to bring you victory’. Now let us respond. Amen.’

The prayer speaks for itself and, I’m sure, moves you. But for the people of the congregations of Israel, each time this prayer is intoned, its gravity, its reality, hits home with harshness, urgency. And when our country is at war or the situations on our borders are volatile, or when we are under steady missile attacks, or during periods of threats to kidnap our soldiers, the prayer is especially meaningful and poignant. My oldest son Avraham is only 14, but as he gets older and taller, his voice deeper and his upper lip fuzzier, I find it easier to picture the day when he will don that khaki uniform and join the Israeli army. But for now, I only need to look around the synagogue at friends and neighbors whose sons, husbands, brothers and boyfriends are protecting our borders and keeping us safe, and I feel for them. And sometimes I choke on my answering “Amen”.

The second prayer is one I find myself attaching to Israel’s Independence Day. It is called “The Prayer for the Peace of the State of Israel” and it is said right alongside the first prayer. It is slightly longer than the first but I am, again, including it here so you can feel the passionate pleading of the words, as I do.

“Our Father in Heaven, the Rock of Israel and its redeemer, bless the State of Israel, which marks the dawn of deliverance. Shield it beneath the wings of Thy love; spread over it Thy canopy of peace; send Thy light and Thy truth to its leaders, officers, and counselors and direct them with Thy good counsel.

O G-d, strengthen the defenders of our Holy Land; grant them salvation and crown them with victory. Establish peace in the land and everlasting joy for its inhabitants.

Remember our brethren, the whole house of Israel, in all the lands of their dispersion. Speedily let them walk upright to Zion, to Jerusalem Thy dwelling place, as it is written in the Torah of Thy servant Moses: “Even if you are dispersed in the uttermost parts of the world, from there the Lord your G-d will gather and fetch you. The Lord your G-d will bring you into the land which your fathers possessed and you shall possess it.

Unite our heart of love and revere Thy name and to observe all the precepts of Thy Torah. Shine forth in Thy glorious majesty over all the inhabitants of Thy world. Let everything that breathes proclaim: The Lord G-d of Israel is King; His majesty rules over all. Amen.”

The tradition of praying for the government and its leaders can be traced back to the prophet Jeremiah after the first exile from Jerusalem. He tells the exiled Jews, “Seek the

welfare of the city where I have caused you to be exiled and pray to G-d on its behalf.” (Jeremiah 29:7) We Jews, through the ages, were always physically, economically and politically dependent upon the good will of the government under whose rule we lived. We were and unfortunately continued to be powerless, and always felt the need to beseech G-d to direct the leaders of the country we lived in, to rule the Jews in a just and merciful way. There was always a prayer for the Czar and for the kings of Europe. The first Jewish prayer book including a prayer for the government is from the 14th century and it is described as an “established custom”.

On the fifth of Iyar—May 15, 1948— the day we celebrate our Independence Day- we established the State of Israel. With this came new challenges—we were a people used to living our history under the rule of others. With the declaration of sovereignty and independence came the opportunity for the Jewish religious leaders to compose a prayer expressing the ideology of hope for our new, Jewish homeland. The prayer is never secular… it maintains that the state and its defense is in G-d’s hands. The words express the belief that the establishment of the State was a divine event, resulting from the fulfillment of G-d’s promise to the Jewish people. It prays for the time that G-d will gather and bring all the Jews from the Diaspora to live in His land.

Some ultra orthodox are uncomfortable with the prayer, claiming that the redemption cannot and will not be brought about by the establishment of a secular state, but by the observance of the Torah. Some Jews in the Diaspora, who are comfortable with their lives, may not relate to a prayer that pleads with G-d to return them to Israel in anything more than a spiritual, theoretical sense.

There have been other problematic tensions connected with this prayer. Following the expulsion of the Jews from Gaza, some people found it next to impossible to utter the words “Bless the State of Israel” when it was the state of Israel which forced the evil decree. But I, for one, never had a problem with it. Then and now, when there are things my government does and says which pain me, angers me, I find comfort in the words of the prayer: “Send Thy light and Thy truth to its leaders, officers, and counselors and direct them with Thy good counsel.” I’m not applauding my leaders… I’m praying for G-d’s heavenly aid in guiding them and changing their warped, misguided ways.

May we soon see the day that our soldiers can come home. May we live to see our leaders leading the country in G-d’s vision. And may G-d protect us in our land and bring us peace.