School is out and my house reflects the fact that there are now more kids at home full time. So does my kitchen. I came home yesterday to find watermelon rinds and empty sacks of flour splayed on the counter tops and both kitchen sinks overflowing with dishes. Literally.

But I comfort myself that in this chaos reigns a certain order. A kosher kitchen is regulated by rules, and no summer vacation, with all the laxness and looseness it entails, is going to change that. I admit you have to look closely to find hints of that order, but they’re there. Watch and learn! The kids had obviously wanted a snack after dinner, and 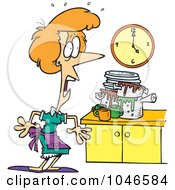 though they had had their sights set on the ice cream in the freezer, I had left Shabbat leftover meatloaf for them in the frig, so they had to settle for the non-dairy dessert of watermelon, because milk products may not be eaten right after meat! The empty bags of flour were more complicated but I sleuthed a bit and found out that Avraham was out for an evening of making pita with his friends. But, tradition states that flour in Israel has to be sifted before being used to check for even the tiniest of bugs, so he graciously sifted his flour assignment before going out to bake pita in the neighboring fields. The sinks full of dishes? Well, those were just testimony to a house where all my kids bring home their friends, all day and night, and meals must be eaten and drinks and snacks grabbed, and no time to wash. Yet, no bowl of cereal and milk was thrown into the meat sink and no barbecue utensils were thrown into the dairy sink. The rules are so ingrained, they have become automatic, and even Elitzur’s six year old friends will race into the kitchen, scared of missing a minute of their computer game, and scream out to him, “Which sink should I put the spoon from my yogurt in?” If we’re sitting in the dining room for our Shabbat meal, and we realize someone’s missing a soup spoon, we’ll send Elitzur into the kitchen to get one. And he knows to check with us first, to be sure he’s bringing one from the right flatware drawer.

The tradition traces back to Moses, when we are told, not once, but three separate times in the Bible “You shall not boil a young goat in its mother’s milk” (Exodus 23:19, Exodus 34:26, Deuteronomy 14:1). Our tradition tells us that from Biblical times this restriction extended beyond goats and milk, but was meant to enforce a total separation between meat and dairy products. Over the years, guidelines developed and details were added.

The rules are there. We follow them. No negotiating. On Friday we decided to celebrate Ahuva’s 22nd and Elitzur’s 6th birthday. We put out ice cream with all the toppings. Avigayil and Matan (and Amit of course) came over for the celebration and I noticed Matan not taking anything. Turns out, Avigayil had been frying breaded chicken cutlets that morning for the next day’s Shabbat meal, and Matan couldn’t resist the fresh crispy cutlets and swiped one. So then he had to wait the appropriate number of hours before he could indulge in our dairy desserts. I’ve even received invitations to weddings and Bar Mitzvahs which had printed at the bottom “Join us for a Dairy Buffet”, to let guests know not to eat a late meat meal before coming.

It’s not as complicated as it sounds. To maintain a kosher home, you must allow only reliably-supervised kosher food into your house. That does not mean that a rabbi has blessed the food. It means that a knowledgeable authority has determined that the food was prepared in accordance with kosher rules. Beyond that, your entire kitchen and eating areas must also be kosher. Setting up a Jewish home, means setting up a

kosher kitchen. A newly married couple has the thrill of choosing two dish patterns, two sets of flatware and two sets of pots and pans! There should be no chance of confusing the dairy and meat utensils. In our house, as in many Jewish homes, having a houseful of company is the norm. And since we are very relaxed with our guests, we want them to feel at home. It’s not unusual that when guests arrive, we’ll show them around the kitchen, pointing out where the dairy cups and counters are, so they can make themselves a cup of coffee if they wake up earlier than we do. (We also show them which sink is which and which sponge is which, in case they want to offer to wash the dishes!) In our house we have a few knives and wooden mixing spoons that look too close for comfort, so my husband Kuti has marked the handles of the dairy ones.

When we had the privilege of building our home, here in Samaria, we met with a kitchen planner to best utilize our space. He was a religiously observant man, and that made it much easier to explain why we wanted two sinks and two separate counter areas and cabinets. Sometimes, before a long Jewish holiday, there’s a lot of cooking to be done so as not to use electricity or light fires on the festival itself. So Jewish housewives have to pace themselves, so to speak, and juggle and shuffle their menus with cooking plans. Sometimes I’ll speak to a friend a couple of days before the holiday and ask her how her cooking is going and she’ll answer, “I’m done with the dairy meals!” Or: “Today I’m doing all the pareve (neutral- neither meat nor dairy) baking in the oven.”

My daughter is studying in university now, where classes are mixed with secular and observant young men and women. Her schooling up until this point was exclusively female and exclusively with observant Jews. This experience is new for her, and she maintains that though her observance of kashrut perhaps sets her apart in a way from her secular friends and classmates, it offers a wonderful chance to learn. When she began her studies, her secular friends would look at her and the other observant students in the class and say, “How is it possible to stick to all those rules—all the time?” Now, two years later, they have learned so much. When Ahuva goes to study in the

dormitory room of her secular friends, there is a stack of paper plates for her to use to lay out her bagged lunch. Her friend may make a comment like, “Ooh, too bad you can’t taste my mother’s chocolate cake, but it was baked in her oven.” But then she’ll pull out a box of corn flakes and a container of milk, knowing she can offer kosher packaged food. Every time there’s a birthday of one of Ahuva’s classmates, there’s a small party and a cake. Everyone knows that one of the religiously observant girls always bakes and brings the cake, and always brings a kosher knife with her! Before the Festival of Purim, the students made a lottery drawing to see who gets to give whom the traditional goody basket. Every secular student knows that if he “drew” an observant friend, all his snacks should be closed packaged goods with kosher certification printed on them, to prevent uncomfortable situations. There is tremendous admiration shown and it’s thrilling that the rules of keeping kosher have managed to bring people together in an environment of mutual respect.

If keeping a kosher kitchen in your own home sounds complicated, traveling adds a bit more of a challenge. I remember traveling cross country with my parents and sisters when I was ten years old. We left from New York, drove to California and back, in seven weeks. We brought along most of our food, asking motels to freeze our perishables and freezer cans each night, barbecuing on our portable grill, dining off of towel draped tables in our motel rooms, frying omelets in our dairy electric skillet and getting excited when a grocery store in Reno, Nevada or Salt Lake City, Utah had Thomas’s English muffins or Lay’s Potato chips with the proper kosher symbols. There have been wonderful books published for the Jewish market called “Kosher in Australia” or “Kosher in Switzerland”, etc., where you can access updated lists of all kosher restaurants, hotels and supermarkets in most towns or countries around the world. Research is required before a trip abroad because one can’t assume that the quaint diner down the block from your hotel will be kosher…or the charmingly ethnic restaurants in Epcot Center…or the midnight buffet on the cruise around the islands of Greece. When my husband Kuti would travel for work, he would attend business lunches and sometimes have to settle for nursing a beer for a couple of hours while everyone ate their three course steak dinner. Many years ago, it was much harder traveling abroad because kosher items were not as readily available. We would laugh when we would go to the airport to see friends off, and see Jews with bags of sandwiches and snacks “just in case” they’d go hungry before the next kosher store could be found!

Are all the rules and limits confining? Stifling? I don’t think so. I find them reassuring. Eating is one of man’s biggest and strongest impulses and I think keeping G-d’s rules of kashrut is His way of reining in this natural urge and putting a cap on it. Keeping kosher teaches a certain satisfying control and discipline. Keeping kosher is not about self-denial and suffering. It’s about responsibility and commitment. And perhaps it teaches us to stop, at times, and realize where our food actually comes from.