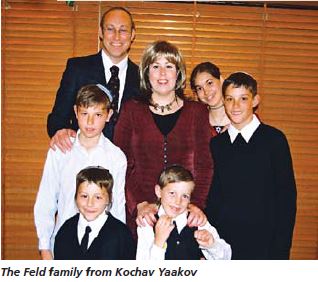 Nahala is proud to introduce some of the brave pioneers who make their home in the communities of Judea, Samaria & Gaza, and trust you will find these very special people an inspiration.

American-born Rabbi David Feld, a resident of Kochav Yaakov in Judea, is not what you would call your typical Rabbi… or a typical immigrant Israeli for that matter. In fact, there is very little that is typical about this remarkably dedicated, talented man.

When Rabbi Feld received his rabbinic ordination, he felt strongly that he should put his training to good use, and give something back to his native country. So instead of embarking on a “typical” rabbinic career, he became a US Air Force chaplain. And when he fulfilled his lifelong dream to settle in the holy land in 1985, Rabbi Feld believed he still had much to offer America. So he remained an active chaplain in the US Air Force Reserves. From his home base in Kochav Yaakov, Rabbi Feld travels the globe tending to the spiritual needs of US servicemen – of all faiths. Even in Iraq!

At the end of Operation Desert Storm in February 1991, Rabbi Feld was dispatched to the northern Iraqi border, where he aided US soldiers in Operation Provide Comfort, aimed at helping the hundreds of thousands of fleeing Kurds. Rabbi Feld stood shoulderto- shoulder with US soldiers, in dilapidated refugee camps and in foxholes, as they tried to save lives, and quiet pockets of insurgency from rebels who didn’t believe that the war had really come to an end.

Today, Rabbi Feld is based in the US Embassy in Israel. His assignments include ministering to the hundreds of US soldiers and reservists stationed in Israel, or sailors docked in the Haifa port. Rabbi Feld never misses an opportunity to be Israel’s goodwill ambassador, introducing US servicemen to the beautiful side of Israel – the one rarely seen in the press or broadcast news – and accompanying soldiers on visits to sites holy to Jews and Christians.

Rabbi Feld lives with his wife, Tamar, the host of the Tamar Yona show and six other weekly broadcasts on Arutz 7, their five children and three dogs in Kochav Yaakov, a community of over 400 families that protects the northern approaches to Jerusalem. He works as a counselor for the Maccabi Institute for Education & Social Welfare in Jerusalem, which runs halfway houses, a big brother/big sister program for disadvantaged youth, soup kitchens, a battered women’s shelter, programs for the elderly and other assistance and advocacy programs for the needy and destitute.