Natan Greenberg, known back then as Johnny, grew up in the U.S. He visited Israel for the first time at the age of 12 and he was hooked. His second visit was a few years later and he told his parents that he was moving. Naturally, they felt he was too young. Not deterred, he offered his high school principal a deal. “We both know I bring chaos to your orderly halls. Let me finish my requirements and graduate early!” The deal was cinched.

Natan moved to Israel, on his own, joining an American yeshiva program, but he spent most of his time hitchhiking and hiking through Israel, falling in love with the people and the land. In the summer of 1973, he joined the army. The Yom Kippur War had broken out, and it was during this intense time of serving in the IDF that Natan became more connected to his faith. After his army service he returned to Yeshiva to continue his Torah studies. He loved his learning, but he felt something was missing. He attended university while continuing his search and discovered the writings of Breslauer Hassidism which focused on a personal, intimate relationship with G-d. “Till now everything was head-oriented and it was intoxicating to make G-d the center, to let Him shape every part of my life.”

Natan moved to an ultra-orthodox neighborhood because he identified with his neighbors’ passionate service of G-d, but he found some things hard to accept. He served in the first Lebanon war and had friends killed, and it was hard to come home from their funerals to a society that discouraged military service.

He was thirsty for a Judaism that would strengthen his spirituality while allowing him to be part of the contemporary world. So he continued searching for something different. By then, he was married to Ruti, and they decided to become farmers. They moved to Samaria and, for three years, they grew melons, corn and onions, and planted a vineyard.

But Natan realized that his true calling was teaching.Natan spent five years studying for and receiving his rabbinical ordination. The family then moved to the U.S. for three years in order to work in Jewish outreach. “I had a debt to pay towards my people,” Natan explained. He worked with Jewish, unaffiliated youth, visiting university campuses and public high schools, establishing Jewish awareness clubs where he spoke of the land of Israel and the beauty of the Torah.

Upon their return to Israel, the Greenbergs moved to Bat Ayin- a small community in Judea with no mainstream; a place of spiritual seekers. Natan built a home in Bat Ayin and decided to create a place of Torah study that combines all the values he holds dear: Serving G-d, Zionism, and Hassidism, while embracing the world and humanity as a manifestation of G-d’s presence. “I founded the Bat Ayin Yeshiva because I wanted to provide an alternative model for personal growth and serious Torah learning, a place which seamlessly connected ancient Jewish tradition and modern society.”

The Bat Ayin Yeshiva opened its doors to its first three students. Years passed and Rabbi Natan, as he is affectionately and respectfully called, taught and educated many future teachers and ordained hundreds of young men. Rabbi Natan and Bat Ayin changed these people’s lives and the face of Israel. They were challenged to search for a way to contribute to society. These graduates are leading communities, working on campuses, creating Jewish art and music and empowering men and women to embrace their faith.

Thanks to Rabbi Natan, people are able to combine the intensity of spiritual introspection, with the intellectual approach to biblical texts, and a tolerance for modern society. The combination of Rabbi Natan’s lively past and his steady soul searching has made him a teacher who can relate to these young men. The youth of today’s Israeli religious society are very attracted by the idea that G-d can be served intensely and with joy, without blocking out the modern world.

“Rabbi Nachman of Breslauer Hassidism once said, ‘The whole world is a narrow bridge’”, quotes Greenberg, “so you have to walk a thin line.” Rabbi Natan feels a tremendous bond with the Christian groups who come to visit him, his wife and his ten children, through CFOIC Heartland. “When I talk to Christians about the awareness of G-d’s presence within us, I feel that faith is a point of contact. There is a language, a commonality of faith and prayer. We share that reality and we create a deep connection.”

Rabbi Natan, you have infused and influenced many with your holistic theology and energy. May you have the strength to keep inspiring future generations and may you keep growing in your relationship with G-d. 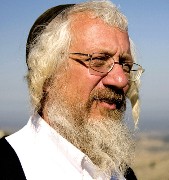