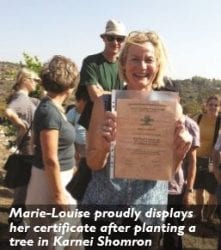 Marie-Louise has always lived a kind of parallel life. She was born in 1957 to Dutch parents who had only recently immigrated to South Africa and they clung to their European identity.

From a very early age, Marie-Louise’s exposure to Judaism was intertwined with her involvement with music.  As a child, she encountered Jewish music teachers and fellow students. She attended friends’ Bat Mitzvahs and even fasted on Jewish fast days with her Jewish teachers. Although Christian, she recalls sensing that there was a “special way to live life if you’re Jewish.”

Marie-Louise first encountered Israel when her piano teacher took her to concerts of Israeli musicians.  After studying music at two different universities in South Africa, Marie-Louise won a highly competitive scholarship to study concert piano in Vienna. And then, in Vienna, Marie-Louise did what had become second nature to her — she sought out the Jewish community. She had been so much a part of the Jewish community back in South Africa that connecting with Jewish culture was just part and parcel of who she was.

Although missing a Jewish connection, Marie-Louise European upbringing enabled her to easily identify as an Austrian. She met and married Hans, an Austrian, and together had a son named Peter.

Marie-Louise never gave up hoping that she could serve, in some way, to further the dialogue between Christians and Jews. And then it happened. In the mid-1990s, Vienna’s Jewish Museum reopened, Austria took responsibility for its part in the Holocaust, and Christian Jewish relations began to develop. Marie-Louise remembers when Christians for Israel’s president first visited Vienna. Until that time, her connection to Israel was mainly through her music.  But listening to the C4I leader’s speech, she suddenly understood Israel’s Biblical significance. Marie-Louise became more involved in Christian-Jewish relations and in 2008 C4I asked her to open an Austrian branch of C4I.

For Marie-Louise, the opening of C4I Austria was a continuation of her idyllic Christian-Jewish life in South Africa. She made Jewish friends and formed relationships with the Israeli Ambassador and the Israeli Embassy in Vienna.

Marie-Louise is “getting out the message of love of the God of Israel” through Israel advocacy, projects and tours to the Holy Land. Just four months after opening the C4I Austria chapter Marie-Louise launched a bimonthly newspaper called “Israel Actuary” which is circulated throughout Austria. In it, she writes about Israel, and about the projects C4I promotes, including many CFOIC Heartland projects in Judea and Samaria.

Recently, Marie-Louise helped organize an anti-Apartheid week rally.  She spoke of her first-hand experience with Apartheid South Africa and firmly explained that nothing of the kind exists in Israel. Instead of “Boycotting, Divesting, and Sanctioning”, Marie-Louise called on good people everywhere to “Buy, Defend, and Support —  Buy from Judea and Samaria, Defend Israel as the only democratic state in the Middle East. Support the Jewish people against anti-Semitism and support Israel wherever you go.”

In 2009, at the C4I forum in Israel, Henk invited Marie-Louise to attend the opening of a library in Nokdim that was dedicated in memory of a young woman who had been murdered by terrorists. This library was a CFOIC Heartland project.  It was there that Marie-Louise first met CFOIC Heartland Director, Sondra Baras and then heard her address the forum during a conference session. “She had all these maps with her”, Marie-Louise recalls. “I was so enthusiastic about her. We connected very well from the beginning.”

“CFOIC Heartland does a wonderful job of opening people’s eyes to what Judea and Samaria is all about through teaching about the history of the region, utilizing the Bible and maps, and sharing personal stories of life in Judea and Samaria.” Since meeting Sondra, Marie-Louise loves taking her groups to visit the CFOIC Heartland office in Karnei Shomron. During her most recent visit with a group of women from Australia and Germany, she visited so many different communities and her group was amazed. They planted trees in Karnei Shomron:   “With Bible in hand, you see prophecy come true in front of your eyes. ‘I will plant Israel in their own land, never again to be uprooted from the land I have given them’” she says, quoting Amos 9:15.

“When you visit Judea and Samaria you get such a broad spectrum. You see little communities like Yakir. You see all aspects of life; social, agricultural, you name it. It gives you insight into the strength of the people, the spirit of pioneer-ism.”

This spirit is what Marie-Louise loves most about the region. What she finds so special in the communities of Judea and Samaria is the atmosphere of kindness that is so prevalent there. She sees the people standing together, and coming together to help their fellow neighbors.

This was particularly apparent while visiting the Samaria Family Assistance Program in Barkan, where she saw volunteers packaging food parcels for needy families.  She was impressed to learn that neighbors prepare hot meals for mothers who have just given birth.   “It is a spiritual thing to do good for your neighbor.  It is something which you see and feel in the communities,” she continues, “and it is accompanied by a deep spiritual conviction that this is how you live.”

When Marie-Louise thinks of the people of Judea and Samaria she thinks of hope. “It is the inner core of the Jewish people that never fails, and has helped them through history. Hope never fails.”

“I so much admire the strength of the people in Judea and Samaria. It’s not an easy life, the pioneer life. And yet the people emanate joy, and courage. It’s wonderful to meet the people in these communities.”