Linda Smith – From Texas to Samaria 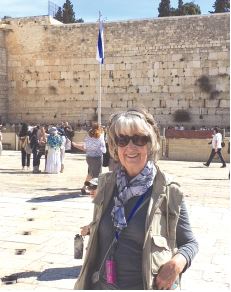 Linda Smith loves Israel. She feels deeply connected to the vast desert in the south, the white beaches of Tel Aviv, the green thick forests of the Carmel and the biblical mountains of Judea and Samaria. This attachment was always pure and powerful but has become stronger with every year.

Linda has always loved Israel and when she married Ed Smith in 1985, they discovered a shared passion for the Land.  They made a number of visits to Israel on their own and later on, began to organize their own tours.  For Linda and Ed, visiting Israel was not just about visiting a beautiful country and enjoying historical sites.  For them, Israel was the foundation of their faith and the place where they and everyone they brought with them, would gain a profound understanding of the origins of Christianity as well as a sense of responsibility towards the Israel of today.

Ed passed away fourteen years ago, after a painful struggle with illness.  Linda had to cope with her own personal tragedy but she made the decision to go forward, to keep alive the dreams and the mission that she had shared with her husband – to teach and inspire Christians about Israel.  Linda began to lead her own tours and makes sure to visit Israel at least once a year.  She has a strong group of regulars that join her tours but each tour brings newcomers as well. And Linda has been blessed to take her daughters, grandson and even cousins to Israel, enabling them to experience her own passion for the land up close.

Linda connected with CFOIC Heartland many years ago on an early visit to Israel with Bridges for Peace.  Sondra Oster Baras spoke to her group and they instantly connected.  Through Sondra and the work of CFOIC Heartland, Linda was able to connect with the Jewish communities of Judea and Samaria.  Since then, Linda has always included a visit with CFOIC Heartland in her Israel tours.   A favorite part of the visit is always planting trees in Karnei Shomron.  And each year, the group is able to check out the trees they planted in previous years.  Linda also hosts Sondra in her home for an annual CFOIC Heartland meeting of supporters in Austin.

Just this past November, Linda hosted a meeting for CFOIC Heartland in her home, the evening before President Trump’s announcement that he was moving the US Embassy to Jerusalem.  The next morning, Linda and Sondra sat glued to the television as they watched the historic announcement.  And as part of a coordinated effort to provide positive feedback to the White House as a result of this historic announcement, Linda endorsed the Embassy move and worked with CFOIC Heartland to ensure that thousands of CFOIC Heartland supporters worldwide would respond positively via Facebook and Twitter on this momentous occasion.

But Linda has found additional ways to connect with Israel and the Jewish people.  For many years, she has joined a committed group of Christians as they study the weekly Torah portion.  In Jewish tradition, the Five Books of Moses are divided into weekly portions, which are read in the synagogue each week, completing the cycle in one year.  There are a growing number of Christians who are following this weekly Torah portion and committing themselves to Torah Study, whereby they review the portion, either on their own or with friends, discussing the inner meanings of the holy words.

Linda’s Austin group meets every Saturday for serious Torah study, often spending hours on the portion, analyzing the words, understanding the underlying messages and finding essential meaning in the words for their own lives.  They use a Bible with Jewish commentary, written in the original Hebrew with English translation, and in that way feel that they are coming closer

to the roots of their own faith.  “My life has been transformed since I began Torah study.  You grow in knowledge as a Christian when you understand the Hebrew Scriptures, and by studying the Jewish commentaries, we are exposed to levels of interpretation that are new and challenging as we look at the Holy Scriptures.”

Linda cares about every aspect of Israel – the people, the land, its past and its present.  Four years ago, Linda sat in her Texas home holding her breath as she watched television footage of rockets being launched by Hamas from the Gaza strip into Jewish communities in the south of Israel, leaving a trail of pain and damage in its wake. “I felt so close to the events in Israel because I felt so personally connected.  But I also felt so far away.”  Linda then downloaded an app on her cellphone that notifies her whenever bombs fall in Jewish communities around the Gaza Strip. And now she is totally connected.

“Last week, as missiles were being fired all through the night, my phone was beeping constantly. With every alert, my heart skipped a beat and I prayed for the safety of the families, the women and children, and the soldiers. God has always been a source of strength and comfort for me in hard times so I turn to Him and ask Him to bring peace to Israel.”

Linda Smith refuses to get excited about her hard work and devotion to Israel.  She sees it as a given.  “It is my legacy to pass on to my children and their children and descendants forever, to impart to them the importance of the Jewish people’s presence in Israel in general and the biblical heartland in particular.”   Linda has been there for the people of Israel and especially for the people of Judea and Samaria for years, educating Christians about them and supporting them financially.  Linda is a true friend of Israel.