Shovels in hand, saplings balanced between them, the youths of Leshem trekked eagerly over the hills outside their community to the place where they finally planted their trees. It was a bright day and the sun beat down on sunscreened necks and hatted heads. The teens began to dig. Dry earth broke under heavy pickaxes, rocks were hauled away, and bright green saplings were lowered gently into their respective plots and then deluged with water. Laughter and energy filled the valley.

That morning, Israeli teens from the hills of Judea and Samaria forged an inextricable bond to their Homeland: with their own hands they planted the trees that you provided for them, bringing forth more greenery to the land and actively helping Israel bloom. There is no greater connection to the land than being able to sink your hands deep into the earth and bring forth life from it, and it is you, and people like you, who are responsible for that connection. Your donations towards trees have filled the forests and revived the hillsides of Judea and Samaria. 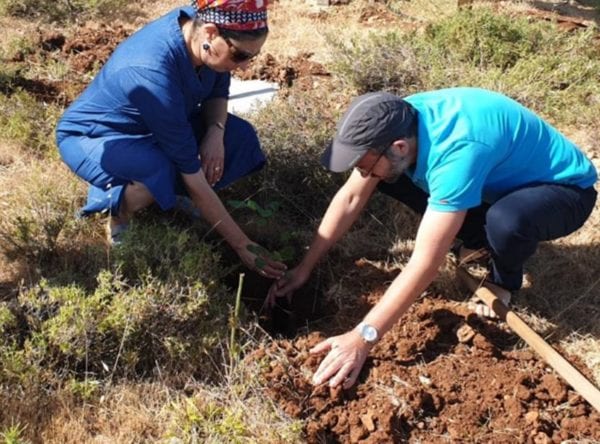 The parents of Dvir Sorek z”l planted trees in memory of their son, who was killed in a terror attack in 2019

In Ofra, Yoav and Rachel Sorek, parents of the late Dvir Sorek who had been murdered by terrorists in 2019, planted some of the saplings that will grow into the Dvir Sorek Memorial Forest. They spoke of the kindness of their Christian friends – you! – who provided the means to memorialize their son in such a meaningful way. Their gratitude was overwhelming.

In Karnei Shomron, a new grove of fruit trees was recently planted. Normally, a CFOIC tour group would have done the planting, but in this age of restricted travel, the planting was carried out by CFOIC Israel Director Sondra Oster Baras, mayor of Karnei Shomron Yigal Lahav, and a few masked workers from the community. Even though corona restrictions forbade the local residents from participating in the planting, the residents still glow with pride when they speak about their little grove. Said one resident: “It’s incredible – I walk out my door, and suddenly I’m in this paradise of fruit trees. All thanks to our Christian Zionist friends!”

In 1867, author Mark Twain visited Israel and pronounced it “rocky and bare,” noting that “there was hardly a tree or shrub anywhere.” Today in 2020, thanks to you, the Biblical Homeland of the Jewish People has become an unrecognizable paradise, a place of patchwork farmland and lush forests, sparkling springs and emerald-green hills. Israel today bears no resemblance to the desolation described by Twain so long ago, and as Amos the Prophet prophesied, the People of Israel have been replanted in their land — thanks to you.