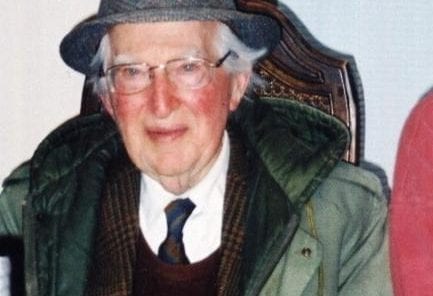 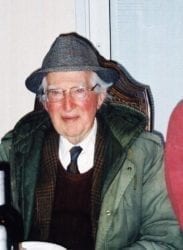 I was walking down my block,Hashikma Road, the other day and passed #20. There was a little red tricycle parked outside and a small plastic slide perched on the front lawn. I still do a double take when I realize there is a new, young family living there. To me, that will always be Mr. Gorman’s house.

He was a personality, that’s for sure. Since Mr. Gorman lived right down my block, I’d see him passing my house almost every day, inhis unchangeable wool plaid jacket. During the winter he added a wintercardigan underneath and a winterjacket on top. But, otherwise, spring, summer or fall, he wore that jacket. I loved walking outside when he passed my house, to see what he was up to. Because he was always busy. The man was 90 years old and never idle. Some days I’d see him pushing his ancient wheelbarrow down the block, filled with red, thick earth that he scooped up from the empty lot on our corner. He explained that he needed it to fill in empty spaces around his trees. Another day I’d see him dragging wood planks along the sidewalk, which he found leftover from a kids’ bonfire the previous night. He would stop to tell me that some of his windows didn’t lock shut and he planned on wedging these boards that he found onto the tracks of the windows, so intruders couldn’t slide his windows open. Some days I’d go outside just to hear about what he was going to mail at the post office around the corner, his letters filled with stamps of all different denominations, picked off of envelopes he saved in his house for years. He never learned Hebrew and sometimes he asked me to translate a letter he received. He was enthusiastic and friendly, charmingly with-it and refreshingly apolitical.

David Gorman and his wife Esther made Aliyah (the move to Israel) twenty years earlier, when he was 70 years old! It was a dream of theirs for many years to settle in G-d’s land. What a lesson to every Jew, that it is never too late to pick yourself up, leave your familiar life behind, and follow your heart and dream to the place G-d commands us to live. They had lived in Washington where Mr. Gorman was an engineer for the Department of Roads and his wife was a kindergarten teacher. Mrs. Gorman wanted to move to Jerusalem, where their daughter had moved years earlier. But Mr. Gorman only wanted to live in Samaria—in the Biblical Heartland of Israel. And from the time they moved into Karnei Shomron, Mr. Gorman became a favorite fixture of the community.

I remember when he started having problems with his vision and was going from doctor to doctor, discussing his options and finally having cataract surgery. Afterwards, while trying to get used to the changes in his vision, I would laugh to see him with a different pair of eyeglasses, every day, trying to see which prescriptions helped him most, or at least bothered him the least. We would discuss which era each pair was from. He must have had these glasses in his house for decades. I told him that only he can still look “groovy” in massive round frames from the seventies and that only he can look distinguished in the heavy dark professorial looking frames. The man threw nothing out.

When his vision was fading, what bothered him most was his inability to read from his prayer book. But he didn’t give up. He built what I can only call “prayer book contraptions”. Based on the angle and strength of light coming in through different windows of his house at different times of the day, Mr. Gorman set up shelves to prop up his prayer book in a way that the angle and distance would allow him to make out, more easily, the familiar ancient words. Synagogue was always an integral part of his life.

Three times a day he walked back and forth to the building that was a second home to him. He would walk in and be greeted with “Hi, Mr. G.” from all the congregants. He was a regular there and the synagogue was a place he touched base with his beloved community of Karnei Shomron. People flocked to him to tell him about grandchildren born, who was ill in the neighborhood, and to invite him for Shabbat meals. As he got older, he began getting a little more forgetful, and everyone who invited him for a Shabbat meal also called his next door neighbor, who graciously kept track, and wrote out a list for Mr. Gorman, reminding him where he was scheduled to go to eat. Mr. Gorman was terribly frightened of catching cold and the harsher cold days kept him cautiously home. If he didn’t show up to synagogue, people asked around to find out if anyone knew where he was, and there was always a concerned neighbor who called or stopped by to see what had kept him home that day.

David Gorman lived alone after his wife Esther died and remained fiercely independent. He needed very little. His daughter would sometimes take a bus from Jerusalem to visit during the week and make sure his freezer was stocked with food. But otherwise he made do with jarred gefilte fish and samplings of dishes from loving neighbors. He was very grateful for anything anyone did for him. For years, he would ask me to pick up a traditional Shabbat challah loaf for him when we did our own Friday shopping. My boys would take turns walking over to his house to bring it to him and he would count out the exact amount he owed us from scores of containers of coins lined up on his window sills, and he would always make sure to have a snack with which to reward the messenger.

I remember how thrilled Elitzur was when we decided he was old enough to do the delivery. He went off on his little red tricycle, the supermarket bag with the challah tied onto the handlebars. He knew he had to knock (bang) really loudly on Mr. Gorman’s door to get him to answer because he was a little hard of hearing. And then Elitzur would come pedaling back, the money in his pocket and a baggie of pretzels or potato chips clamped between his teeth. One friend of mine brought him a potato kugel (traditional Shabbat pudding) every Friday and he always thanked her during the week, even pointing out to her when it came out too salty and telling her that he preferred the sweet noodle one! He was appreciative of every little thing you did for him. When he would come to our door with a broken piece of faucet and my husband Kuti would go down the block to change the washer and tape up the problem, he would mention it for weeks.

He loved his garden. When already past ninety, Mr. Gorman was still cutting his own grass. It was a sight to see… Mr. Gorman, with his white, cotton floppy hat perched on his head, dragging the heavy lawn mower to the front of the house, threading a long, thick extension cord through his side window, and patiently trudging back and forth, mowing his piece of land. From the day he built his house, he watered his garden with his washing machine water that he piped outside through a hole he made in his laundry room wall. He was a user of “gray water” long before its time and was inadvertently the first one in Israel to be “green” conscious and was very proud that he didn’t waste water in this desert country of ours. His front garden bloomed gloriously, though wildly, with geranium bushes, and his backyard was crammed with a dozen fig trees. He was thrilled to share his juicy plump figs which ripened just in time for Rosh Hashanah (the Jewish New Year), when it was traditional to partake of a fruit, newly available that season. Every year, he brought a bag full of figs to our door, delighted to be the one to help us fulfill one of G-d’s commandments and make the holiday more special for us. He had old empty seltzer bottles propped up all over his entrance porch, each one with a seedling of geranium or fig tree, rooting until ready to share them with his neighbors.

Mr. Gorman was the first one in the neighborhood to put up a sukka (Feast of Tabernacles booth). While most of the people in the neighborhood weren’t even thinking of the upcoming holiday, Mr. Gorman had already built his sukka We would all get very nervous when for years he insisted on putting it up alone, not liking the thought of him climbing on ladders and hauling heavy wooden doors and walls… but you didn’t argue with Mr. Gorman! He took great pride in showing off his granddaughter’s handmade decorations that hung on the wall, year after year.

He was very supportive of his family. He loved when his grandchildren and great grandchildren come to visit and he made sure to take the twenty minute walk with them, escorting them back to the bus they needed to take home.

The back of Mr. Gorman’s house faced the campus of the local chapter of our Zionist youth group. Naturally, it got quite noisy at times, even late at night. And sometimes the heavy traffic of children created a mess of garbage in the area behind his house. Even so, perhaps because he was slightly hard of hearing or perhaps because he was just a nice guy, he never complained (though other neighbors did).

When the community threw him a 90th birthday party, it was something to see. Everybody took part. It was the easiest party to organize because everyone wanted to do something for him. Tables were set beautifully: there were decorations, cakes, salads, hot dishes. The synagogue’s party hall was mobbed with families from all over the neighborhood who wanted to say congratulations and offer their warmest wishes to a very important figure of Karnei Shomron.

Just a few months later, Mr. Gorman’s daughter called his next door neighbor and asked him let himself in to her father’s house. He wasn’t answering the phone and she was concerned. The neighbor went in and found him on the floor. Mr. Gorman had suffered a severe stroke.

He remained in the hospital for a while, unable to speak, slowly learning to sit up and eat soft foods. He was aware and was able to understand everything that was said to him, but was very weak, and it was sad to see him struggling to communicate. He showed tremendous fight when he was moved to a rehabilitation center but never regained all his facilities. The staff there was amazed at the constant, steady stream of visitors from Karnei Shomron. They would ask who we all were and we would say we were family. Because that’s what we felt we were.

Mr. Gorman died quietly in his sleep just a year ago. I miss you, Mr. G.

When you make a donation to CFOIC Heartland, you are taking a stand for the right of the Jewish people to live on the land that God gave to them.You can donate online via Pay Pal, call our office at 800-647-3344 to give a credit card donation over the phone, or send your check or money order to: US & Canada: PO Box 50833 Colorado Springs, CO 80949-0833 All Other Countries: P.O. Box 752, Ginot Shomron, Karnei Shomron, Israel Thank