Here in Colorado Springs a major event each year during Easter season is the performance of “The Thorn”. This is a reenactment of Jesus’ death, burial and resurrection. I’ve always struggled with this “passion play’ because I’m aware of the violent history that has been associated with Passion Plays. For many centuries Christians have used the Easter holiday as a reason to persecute Jews. Jews living in Christian nations would fearfully wait for the community passion play to end wondering if they would find a horde of impassioned Christians rampaging through their village seeking to avenge the death of Jesus which has just been played out before them in a way which maligns the Jews and blames them for his death.

the Jewish people in the name of Christianity? John 15:13 “Greater love has no one than this, than to lay down one’s life for his friends.”  1John 3:16 “By this we know love, because He laid down His life for us, and we also ought to lay down our lives for the brethren.” John 3:16 “For God so loved the world that He gave His only begotten Son, that whoever believes in Him should not perish but have everlasting life.”

In my Christian walk, the overriding theme has been to love others, to respect others, to treat others as I want to be treated. For that reason, I find it difficult to connect my Christianity with the history that I know is true. I realize that being born in a different century and a different continent could have resulted in a very different view of Jews, Israel and Judaism than I have today.

Where did this historical hatred and anger originate in Christianity? I think that it has two main sources: the first is ignorance — it is human nature to fear what we don’t understand; secondly, there is a diabolical agenda to nullify God’s great redemption plan. The first is relatively simple. The Jews have been called by God to be separated unto Him, to keep themselves separate from the world in which they live. They have done this extremely well, preserving their religion, culture, customs, and people through thousands of years, by simply obeying God’s commandments. For those of us who are not Jewish, we look at them and think their ways are strange because they are so different from the world around them. Yet, this is exactly what God said to them in Deuteronomy 7:6: “For you are a holy people to the Lord your God, the Lord your God has chosen you to be a people for Himself, a special treasure above all the peoples on the face of the earth.”

The second, a diabolical plan to annul God’s redemption plan is more complicated. At the 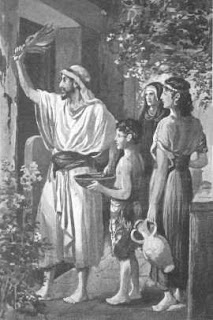 beginning of Jewish people-hood is the Jewish redemption from Egypt, the Passover story. To this day, it has a major influence on both Judaism and Christianity. Yet, since the dark ages there has been a blood libel against the Jewish people that they use the blood of Christian children to bake their Matzah bread for the Passover holiday. This is a wicked lie straight from the pit of hell, since it is a direct violation of God’s commandment against murder. Yet, to this very day it persists as a way to impugn the Jewish faith.

As a Christian, I believe that Jesus was the ultimate Passover lamb, his sacrifice of shed blood cleanses me from my sins and puts me in right standing and covenant with God. I believe that He gave his life freely because He loved me. Given that, how could the Jewish people be responsible for His death or be considered “Christ killers.” As I celebrate Easter and the miracle of Jesus’ resurrection I cannot imagine wanting to hurt the members of my local Jewish community. Instead, I am challenged by Jesus’ words in 1 John 3:16 “By this we know love, because He laid down His life for us, and we also ought to lay down our lives for the brethren.” I want to walk out my Christianity by showing everyone I come in contact with how much God loves them through my actions. My prayer is that I will be an example of Christian faith that is far different from the Christianity experienced by Jews for centuries.