Israel’s Biblical Heartland, Judea and Samaria, has always struck me as particularly breathtaking. Even before I made the move to Karnei Shomron, my husband and I had spoken extensively of living in Samaria, among the hills and greenery and quality community life. The appearance of the region beautifully reflects its history and meaning, peppered as it is with vineyards and orchards, and seems, at least to me, to speak to the type of person who chooses to live there. Especially when compared to city-dwellers, the residents of Judea and Samaria seem to have a deeper appreciation for nature and the natural wonders of the world that God created for us. The people, their communities, and the land all fit together: external and internal beauty match perfectly, complementing each other, the outer beauty of this region singing the praises of its residents. I particularly enjoy driving through the Jordan Valley – rolling grain fields sprawl outward from one side of the highway while forested mountains clamber upwards on the other, but then the car crests a hill and suddenly the expansive scorched dunes of a desert are laid out in front of you.

The community of Argaman is situated in the narrow center of the Jordan Valley region. Driving up to the community by way of Route 90 blesses you with a gorgeous view: patchwork farmland comes right up to the shoulders of the highway, and the hazy tops of desert dunes are just visible in the distance. To the east, the Jordan River sparkles in the midday sun. Argaman was founded in 1970 by a group of Israeli pioneers and named for two Israel Defense Forces commanders, Arik Regev and Gad Mandel, who fell in pursuit of Arab terrorists shortly after the Six Day War. Their names form the acronym “Argaman.” At the time of Argaman’s establishment, the Jordan Valley was sparsely populated and little more than a desert; since the return of Jewish settlers after 1967, farming communities such as Argaman have made the region bloom again.

As a moshav, or an agriculture-based community, Argaman places high value on its social fabric, greatly emphasizing the unity and togetherness of its residents. This is particularly important in a community as isolated as Argaman. The communities of the Jordan Valley are few and far between, but each one is vital to the security of the State of Israel, as the existence of Jewish communities along the Jordan River helps to balance out the rapidly growing Palestinian presence in the Samarian hills.

Unfortunately, around the time of the Second Intifada in the early 2000s, Argaman’s prized, tightly woven social fabric began to unravel. For no particular reason, children were growing up and moving away, and no new young couples were moving in to take their place. The population dropped and the community struggled, and the original pioneers feared that the community would die with them. They dreaded the days to come.

But just as suddenly as the lull began, it was over. New families surged into Argaman, and children who had originally left began to return. Numbers swelled and now the community boasts over fifty families. Confidence in their community returned to the pioneers, but they still wanted to strengthen the bonds between the original residents and the new. Eventually they decided on a joint construction project that would involve all the residents and re-stitch Argaman’s social fabric. The residents were excited. Their community was vibrant and beautiful once again. Now they wanted the outer appearance to match what they knew they had on the inside. 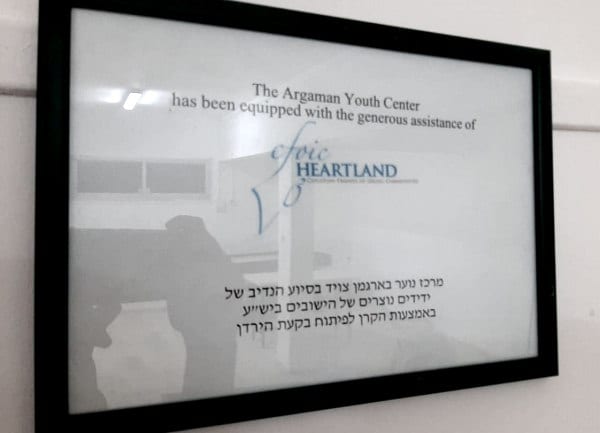 Argaman reached out to CFOIC Heartland, and you answered. They asked you to help purchase paint, plaster, and renovation materials to freshen up the entrance of their community. Residents young and old pledged to work alongside one another and complete the labor themselves. Thanks to a generous Jewish donor, we were able to cover not just building materials, but also flowers, bushes, trees, solar lights, and a brand-new metalwork sign. Residents from each generation came together to participate in this incredible project just this year. Before, the inner beauty of Argaman was well-known, but its outer appearance did not match its spirit. CFOIC Heartland helped to polish the facets of the precious gem called Argaman, and now it shines just as brightly as its residents.

“This isn’t just a one-time activity,” said Shulamit Kaminsky, the Jordan Valley’s representative to CFOIC Heartland, about the entrance renovation. “This proved to the original residents that this is still a flourishing community. It proved they can still have a future here.” To the people of Argaman, the beautified entrance is a symbol of their continuity. No longer will Argaman be simply a place to live; now, it is a place to thrive.

You have helped the residents of Argaman for years. When they asked for your help furnishing their youth center, so their children would have a place to play and socialize during the unbearable heat of the long summer months, you did not hesitate. A wonderful Dutch group has been providing regular support for this community, and together with supporters from all over the world, they enabled the people of Argaman to purchase furniture, appliances, and entertainment for the children, turning the youth center into a haven for Argaman’s teens this summer.

You continue to enable the pioneers of Biblical Israel to build their lives and raise their children on holy ground, surrounded by the beauty God has bestowed upon the Land of Israel. You have helped restore confidence and permanence to this small, isolated place, and you, along with all the wonderful donors of CFOIC Heartland, have partnered with the Jewish people as they have revitalized and restored their nation in the Biblical Homeland.