We often pray to see God’s hand in our lives, to follow the crumbs God leaves for us, as He guides us towards our purpose. Ann Stacy has been following the clues God left for her and is fulfilling an exalted purpose – bringing Christians and Jews together for Israel. 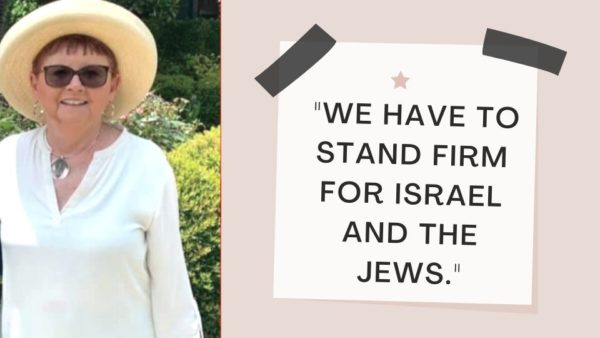 God’s plan was set in motion long ago. Ann’s grandfather, a Methodist Circuit Rider in Texas in the 1880s, passed on his firmly-held belief that the Jewish people would eventually have their land back. Ann did not attend church as a child, but her mother taught her about the Jewish people and Israel. “She knew that when the Jews started to go back to Israel something was up in world history – redemption is at hand,“ Ann recalls. In her youth, the Eichmann trial introduced Ann to the horrible truth of the Holocaust; she was saddened by what she learned but also disturbed that so few gentiles helped the Jews during that time. In college, her exposure to Hal Lindsay’s book, The Late Great Planet Earth, ultimately led her to become a Christian. The book, “full of prophesies fulfilled by the Jews,” convinced her that God was real. She spent the next several years raising her family and volunteering in a local Christian school. But, it was 9/11, that changed her world. As the Twin Towers disintegrated, Ann and her husband were having dinner in Norway with a business contact who spent the entire meal spewing antisemitic allegations, justifying terrorism with the accusation that Israel had stolen the land from the Palestinians. Although hesitant to respond initially, not feeling confident enough to produce the facts, Ann did say to him in complete faith: “The Jews are God’s chosen children, and He gave them the land and that settles it.” After dinner, Ann and her husband decided she should go to Israel, and six weeks later, she left for Israel on a tour, guided by an Orthodox Jew, Danny Ehrlich, and including Judea and Samaria. That trip changed her life.

Prior to that visit, Ann had never personally met a Jew. Her next Israel tour brought her even closer to the Jewish experience. That group was mostly Jewish, including many Orthodox Jews. As Ann got to know them, she was dumbfounded. Everything she had thought previously about the relationship of God and His people changed radically on that trip. Ann visited ancient sites, learned history, fell in love with the land and made life-long friends. This trip was the first of many more trips over the years with both Christian and Jewish participants. In 2011, after learning of the horrific murder of the Fogel family in Itamar, Ann decided to visit that community. While there, a bus of Korean tourists arrived and a man bent down, scooped up dirt in both his hands and, with tears running down his face, cried “Bible Land.” Ann’s own heart echoed the same message. Ann attended her first CUFI conference later that same year, and it was there that Ann first met Sondra Baras, CFOIC Heartland’s Israel director. Ann invited Sondra to her Texas home and a few months later, Sondra became the very first Orthodox Jew to stay at Ann’s home. But Ann did a lot more than open her home to Sondra. She invited Christian friends to meet Sondra, enabling CFOIC Heartland to reach many Christians who were previously unfamiliar with Judea and Samaria. Ann chuckles: “it is very easy to host Orthodox Jews, because usually they bring their own food, and clean-up is a hitch, since they only use disposable plates and silverware.” Joking aside, since that visit, Ann has opened her home to many Orthodox Jews visiting Texas, encouraging Christian support for communities in Judea and Samaria

Ann has opened her home to many Orthodox Jews visiting Texas, helping gain Christian support for communities in Judea and Samaria.

Ann sharply criticizes contemporary churches that advocate for Replacement Theology. She believes the best way to change that mindset is for Christians to get to know Torah-observant Jews: “They have an incredible knowledge of God and love God!” Ann regularly invites groups of Christians to her home, and has hosted Sondra Baras on several occasions, enabling her to share the significance of Judea and Samaria – the Biblical Heartland – with her guests. “If a Christian wanted to visit Israel, I would recommend CFOIC.” Her message to Christians reiterates the lessons she learned from her grandfather and mother: The Jews are still God’s chosen people. Ann Stacy is passionate about helping the Jewish people: “We both want to sanctify God’s name, Christians and Jews; we both know redemption is at hand. We must love each other and accept each other. We must follow the crumbs that God has left for us. We must do whatever we can to help the Jewish people. We have to stand firm for Israel and the Jews.”