All God’s Creatures Great and Small in Nofei Prat

It started with one very special family. The Lubiners had always been involved with animals, the father, Shlomo, even working as a shepherd in Shiloh! When they moved to Nofei Prat six years ago, they set up a few cages of animals right outside their home… just some parrots and rabbits… nothing noisy that would bother the neighbors. Immediately, parents started stopping by with their children.
After a close family member passed away from a long illness, the Lubiners decided to establish a petting zoo in his memory. The community provided a perfect spot, right in the middle of a grove of trees. Animal shelters heard of them and started sending injured and abandoned animals. “Sometimes the gift of the animal was more work than gift, but we couldn’t turn them away”, says Amit, the oldest Lubiner son. Even the police heard about their little zoo and sent them animals. Once it was donkeys that wandered into traffic on the roads and once it was a stray flock of sheep. “Of course we took them in. We were even able to track down the owner, who was thrilled to get back his stolen herd!”
The petting zoo became a real attraction and people started flocking to the area. A lot of people. The municipality noticed and allotted a small budget for minor expenses. Three years later, Nofei Prat enjoyed a growth spurt, and the Lubiners were forced to dismantle the zoo, to allow for building new homes. “We understood. We accepted the decision. Natural growth is a blessing, but it was hard.”
By then, the zoo included turtles, ducks, roosters, rabbits, emus, donkeys, goats, sheep, horses, and 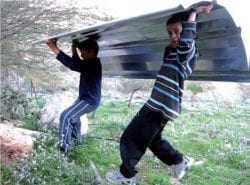 raccoons. It had become such a part of the community, the residents refused to allow it to die. They realized it was up to them to keep it alive. One resident went door to door, asking for commitments of monthly donations. People signed on, believing in this worthy investment.
Volunteers of all ages streamed to the new location. The new setting is wondrous, on a lovely, open slope, overlooking the starkness of the Judean Desert and the placid blue of the Dead Sea. The Lubiner family takes care of the place on a wholly voluntary basis. Ziv Harel, Head of the Nofei Prat Council stresses: “There is someone from the Lubiner family at the zoo every day— every day. It is a true labor of love.” During the school year, a group of high school kids with ADD come regularly, to clean the pens and feed the animals. It is heartwarming to see their newfound focus. Ziv enthused: “Day Camps hired busses to bring kids to our zoo. Teenagers came to help, the local youth director coordinating shifts with Amit. It kept the kids occupied and the place maintained. They brought grills and old couches, making the place their own, spending nights enjoying the view and listening to the background animal sounds.”
The Lubiners learned that milk from their clean, vaccinated goats was medically helpful for mouth sores and other ailments. Doctors recommended the place to their patients, and though this could have been a nice moneymaker, the milk was given, free of charge, to both friends and strangers from all over.
The zoo is a natural magnet, attracting crowds. But the Lubiners believe it could be so much more. Their dream is to establish a handicapped accessible Animal Therapy Room. The petting zoo would become a place for all children. Did you ever notice a child’s face as he tames a squirming gerbil with his gentle touch… the awe of a child as he feels the warm heartbeat of a rabbit close to his own heart… the grin of a child as a turtle pokes his head out of his shell? The successful connection with another living being, loving an animal and being loved in return, has proven invaluable for children with special needs.
Therapists in the area have already started bringing their charges to enjoy the healing effects of animals. Two special needs boys come for horseback riding, Amit himself 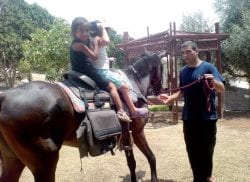 leading the boys around, his gentle nature making up for his lack of training in therapy! Amit sees tremendous potential for a complete learning center, with animals as live, pulsing teaching aids, teaching concentration and curiosity for the environment.
The project needs a building. Contractors have put in their bids and professionals were hired to offer options. Picture it: Synthetic grass to pad the floor, cages, and aquariums lining the room, at just the right height for kids… tables and chairs where the kids can bring over a book or a small furry friend. Amit’s voice bubbles with excitement: “Once the conditions are right, we can even invest in snakes, chinchillas, and iguanas!”
Amit has lots of dreams. But he doesn’t want to get too big. He doesn’t want to become commercial, to be forced to hire a staff and charge large entrance fees. “That would change the very character of who we are.” Amit is overwhelmed by the outpouring of help from CFOIC Heartland. “The funds that have come in will more than get us started on the Animal Therapy Room.” He is moved that something that means so much to Nofei Prat is so important to Christian Friends of Israel around the world. “Sometimes dreams do come true!”