The Irony of a Bulldozer

Former Prime Minister Ariel Sharon passed away yesterday afternoon.  It is an opportunity to review the life and legacy of this man who for so much of Israel’s history held positions of leadership and influence.  Beginning in Israel’s War of Independence in 1948, Sharon distinguished himself on the battlefield, rising to become one of Israel’s most highly regarded generals.  His bold moves in Israel’s Yom Kippur War of 1973, remain controversial to this day, but there is no doubt that his military genius and courage were awe-inspiring.

In 1982, as Israel’s Minister of Defense, Sharon led the offensive into Lebanon, in defense of the Christian minority suffering persecution at the hands of a growing population of Palestinian and other Muslim terrorist groups.  The impetus for this attack was the ongoing rocket attacks from Palestinian groups in Lebanon against northern Israel.  What began as a swift and effective attack, however, eventually mired Israel in guerrilla warfare in Lebanon for years.  Sharon’s name was heavily tarnished at that time, not necessarily justly.  For most people in Israel, Sharon remained a man who was dedicated, first and foremost, to the defense of the State of Israel.

Beginning in 1977, when Prime Minster Menachem Begin became Israel’s first Likud prime minister, Ariel Sharon played a critical role in the settlement movement.  Although the first communities in Judea were settled immediately after the Six Day War in 1967, with other communities settled in the Jordan Valley in the early 1970’s, it was Begin who launched the settlement of Judea and Samaria as official government policy.  And it was Sharon, who more than any other government minister, implemented that policy with gusto and enthusiasm.  For years, Sharon was considered the father of the settlement movement as he was pictured driving on military jeeps across the hilltops of Judea and Samaria, investigating possible locations for communities.  When some government ministers faltered and hesitated in the wake of international opposition to settlement, Sharon never hesitated to take the bold step, to send the bulldozer to build new homes, blaze new roads, so that Judea and Samaria would come alive again with Jews.

But all that changed during his last term as prime minister of Israel.  It began in 2003, when Sharon referred to the areas of Judea and Samaria as “occupied territory” a term assiduously avoided by Likud leaders until that point, reflecting the unflinching position that this land belongs to Israel for centuries and should remain part of Israel forever.  Some wondered whether this was a slip of the tongue.  Others warned that Sharon was undergoing a major change of ideology.

But shortly thereafter, it became clear that Sharon was not the same man who had been affectionately called “bulldozer” for his aggressive settlement activity.  In 2004, he announced his intention to unilaterally withdraw from the Gaza Strip and forcibly remove close to 10,000 Jews from their homes.  This shocked us.  We could not believe he was serious!  We were long familiar with the calls of left-wing politicians to withdraw from Judea, Samaria and Gaza, but this was Sharon!  How could this be? 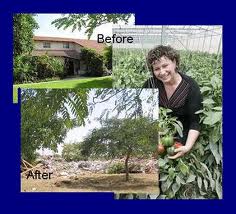 We immediately went into action, as protests, door to door campaigns, and a host of political activities occupied the time and energy of all those who were committed to stopping this outrage.  But at the end of the day, the Disengagement went forward.  Despite our protests, despite our prayers, our tears and our heart-ache, the “bulldozer” destroyed the communities of Gush Katif.  And with that destruction went the last vestiges of respect and even love, that we had felt for Sharon.

I did not know Sharon personally so I don’t really know what happened to him.  There were many theories but Sharon never explained himself to the public.  I do believe, though, that more than anything else, Sharon was tired of fighting.  He was tired of the ongoing criticism he received from the left, which included calling him a warmonger and accusing him of war crimes.  He wanted to be loved and he wanted to be honored.  And he knew that the one way to gain entrance into the pantheon of heroes in today’s international climate would be to destroy settlements.

Today we are facing a similar situation.  As Kerry is in Israel for his 12th visit in just a few months, he has made it clear that he will not rest until he achieves a peace agreement between Israel and the Palestinians.  He is pushing Israel to relinquish our claim to Judea, Samaria, the Jordan Valley and Jerusalem, those areas which are not only strategically vital to Israel but represent the very cradle of Jewish civilization.  Several world leaders have been caught on camera expressing their intense dislike of Netanyahu, the current prime minister of Israel who has remained steadfast in his articulation of Israel’s national rights.  Will Netanyahu go the route of Sharon? Will he, too, succumb to the temptation to receive accolades from international leaders as he sells Israel’s heritage to the highest bidder?  Or will Prime Minister Netanyahu remain loyal to his ideology and strong sense of Jewish history and save our country from disaster? 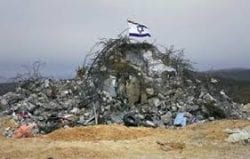 Just a few months after Sharon expelled some 10,000 Jews from their homes he lapsed into a coma.  He has never regained consciousness.  He is still alive, although probably not for long.  I am sure he has suffered.  But what  could have been a dramatic ending for a national hero has become a tragic, long drawn out end for a man riddled with controversy.   I, for one, will never forget what he did to my friends from Gush Katif.