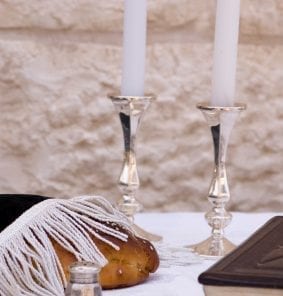 Shabbat — the most important symbol of Jewish identity?

September is here and with it comes so many new beginnings.  School starts on the 1st of September and children begin pre-school or school on that day.  Often Rosh HaShana, the Jewish New Year, also begins in September but this year Rosh HaShana is late and will only begin in early October.

For nearly two weeks before the 1st of September, the news was filled with stories having to do with the start of the school year.  It was all festivities and  stories of adorable 1st graders buying their school bags and trotting off to school.

And that is very unusual in Israel.  Every summer for the past few years, we have had to deal with some sort of war or terrorism escalation, or political upheaval, if not threats of teachers’ strikes.  The turmoil of an Israeli summer has become so commonplace that a quiet summer and an even quieter September seems odd.  But when September began and the main news headlines continued to be school, I realized that we had so much to be thankful for.  The news was actually boring and that is a wonderful thing.

But there has been one issue that has featured prominently in the news recently.  It is the conflict over Shabbat – what does it mean for people in Israel and how is that played out in the public arena?

It is no secret that Israel is desperately in need of an infrastructure facelift and in recent years, the Israeli Government has invested heavily in improving and widening roads, adding new railroad tracks and trains, and doing so much to solve the many transportation challenges.  Our population is expanding rapidly and the roads have not kept up.  Moreover, the congestion in major cities has become so intense that a major overhaul in public transportation is desperately needed.

As with all transportation construction projects, the price of upgrading a bad system is worse traffic jams as the construction blocks existing traffic lanes.  In recent weeks, the project to upgrade Tel Aviv trains required the demolition of part of an existing train station and other train infrastructure.  As it is, traffic in Tel Aviv throughout the day is horrific.  The Ministry of Transportation decided, therefore, to carry out the demolition project beginning Friday afternoon and ending on Saturday night, so as to give workers more than 24 hours to work without interrupting traffic.  The result was major construction work carried out on Shabbat, the holy Sabbath day.

Israel is a Jewish country but most of its population is not strictly Orthodox but some combination of secular or traditional.  The Shabbat is a special day for all Jews in Israel but it is celebrated differently.  For Orthodox Jews, the Biblical prohibition against doing any work on this day is taken quite literally.  There is no shopping on this day, no physical labor and no going to work.

When the State of Israel was first established, one of the cornerstones of the understanding worked out between the various Jewish communities of the time was that Shabbat would be the national day of rest.  No one would work on that day, except essential personnel in hospitals, police, the military and similar.  There would be no public transportation on that day.  Although everyone would choose to celebrate the Shabbat in the way most compatible with his faith and life-style, these basic understandings ensured that the Shabbat is, indeed, a very different day in Israel.  It is a quieter day.  As anyone who has ever been in Jerusalem on Shabbat can attest, the streets are suddenly quieter and the overall atmosphere is one of peace and holiness.

Over the years, the secular population began to chomp at the bit, feeling restricted by Shabbat rules that they did not believe in. And over the years, the restrictions have been relaxed.  Shops have opened outside of cities, thereby skirting municipal bylaws against commerce on Shabbat.  Movie theaters and many restaurants are now open on Shabbat.  And throughout, the religious population in Israel has watched and questioned – how can we preserve the Shabbat – the most important symbol of Jewish identity?

Traditionally the ultra-Orthodox leaders fight these issues politically.  In the current Tel-Aviv case, their political parties are threatening crisis if the work is not stopped on Shabbat.  The Religious Zionist population, a group that I identify with, is conflicted.  On the one hand, we care deeply about Shabbat, and not just on the individual level, but believe strongly that a Jewish country needs a Jewish Shabbat.  On the other hand, it is fairly clear to me that fighting issues like this have never endeared Shabbat observance to anyone.  In fact, when the average secular Israeli is presented with the choice between terrible traffic jams and doing road work on Shabbat, he will choose road work in a second.  And he won’t perceive this choice as affecting the existence of Shabbat in the country.  And to a large extent he will be right.

As I write this newsletter, it is not clear how  this mini-crisis will end.  I am confident that after some healthy yelling and screaming, a compromise will be found.  But I don’t believe that the cause of Shabbat will have been advanced.  We are living the most amazing miracle of all times.  With the creation of the State of Israel, we see the fulfillment of G-d’s word every single day of our lives.  Most people in Israel recognize this on some level.  But many have not yet connected to G-d’s word at its fullest.  Shabbat is the 4th commandment and a key one at that.  And it deserves serious consideration.  It does not belong in a political debate nor should it be relegated to the issue of public works.  I hope and pray that the essence of Shabbat will become part of the daily conversation of Israel, that compromise regarding Shabbat will not grow from political expedience but from a true seeking of G-d’s will.  We can all benefit from the beauty and spirituality of Shabbat!