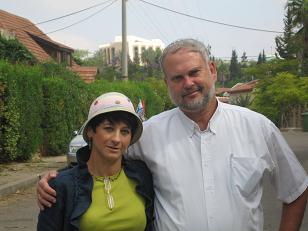 Do you think it’s possible to find a real pioneer today? The kind that legends are made of? In the legendary community of Kedumim, founded in 1975 as the first Jewish community in Samaria for 2,000 years, it isn’t too hard. One such pioneer is Raphaella Segal, a founding member of Kedumim and an active community advocate for the thirty years she and her husband Avi have made their home there.

Raphaella moved to Israel with her Zionist parents from South Africa in 1960. Her parents left a magnificent home and comfortable life behind at an extremely tenuous time for the fledging young state. She grew up in Tel Aviv, and in 1972, married Avi. They settled in a comfortable apartment in Tel Aviv, while Raphaella established a successful optometry practice, specializing in visual therapy to treat ocular muscle disorders. Avi worked as a computer professional.

In the aftermath of the Yom Kippur War, Raphaella and Avi attended meetings to discuss the reestablishment of a Jewish presence in Samaria, near Shechem. Several attempts to settle near ancient Sebastia (Biblical Samaria) failed, but in 1975, the government allowed 30 families to settle in the military camp of Kadoum, just west of Shechem. Soon after, Raphaella, Avi and their three children left the comfort of their Tel Aviv home to live in Kadoum. Entire families lived in single rooms, with no telephones, and all the families shared a communal kitchen, and were dependent on one unreliable generator for electricity. “The area was so barren,” recalls Raphaella, “that birds did not even fly overhead. In fact the only sound we heard was the constant – if we were lucky – hum of the generator.”

Despite the bleak physical conditions, and in the face of tremendous uncertainty, Raphaella and Avi continued their daily routine. Raphaella never missed a day of work, traveling by Arab bus service to the optometry clinic of a major hospital, and expanded her private practice. Avi commuted every day to is job in Tel Aviv. “No one knew where all this would lead,” says Raphaella. “And our families thought we were crazy. Until they came to visit. When we thanked them for coming, they told us with tears in their eyes that they had to thank us – for the inspiration our spirit and dedication gave them.”

Despite the primitive conditions, and the frustrating unpredictability of the political situation, Raphaella and her family never gave up, and in time, gave birth to the permanent, sprawling community of Kedumim.

Today, they are reaping the fruits of their labor. While raising nine children, Raphaella’s active optometry practice continues to grow. She never stopped her tireless work to foster Kedumim’s development. Today she is the volunteer Assistant Mayor in charge of development and Director of the American Friends of Kedumim – positions that require her to travel abroad five to six times a year. Avi continues to work as a computer professional, and in his “spare” time, is working on a Ph.D. in Jewish Philosophy and embarking on a new career in academia. The Segal’s nine children are following in their parents’ footsteps. Three of their married children live in Kedumim’s expanding neighborhoods. Another son moved his family from Jerusalem to the Gaza community of Kfar Darom, to strengthen them as they faced the threat of evacuation and were evacuated along with their neighbors.

So when you despair that the pioneering spirit, idealism, sacrifice and commitment to heritage have become passé, look again. Look at Kedumim – in the heart of Biblical Israel. Raphaella and Avi Segal, modern-day pioneers, are contributing to the growth, development and future of God’s chosen people in the Land that is their people’s inheritance.

Support the teenagers of Kedumim today as they are being educated to become leaders in Israel.