People in My Neighborhood: Meet Alex

I will always associate my neighbor Alex with my move to Israel. Twenty years ago, I arrived in Karnei Shomron with my husband and four daughters, ages 9 months to 7 years old. We asked around for extra curricular activities which would appeal to the girls and signed them up for gymnastics. We showed up at a mildly renovated bomb shelter. Balance beams were a few old benches that rested up against metal-runged ladders that lined the walls. Punching bags and ropes hung from the ceiling and slightly worn carpet remnants covered the cement floor. We were skeptical. That is, until we met Alex. Alex was a hulking, well- built man with muscular arms and legs, ruddy cheeks and a smile that lit up the dimly lit room. Alex was such an integral part of this after-school activity that my kids, and all the kids of the neighborhood, never said they’re signed up for gymnastics.  They say they’re going to Alex.

My kids were shy. Not knowing Hebrew was hard on them at first. Avigayil, my oldest, was affected the most because she was in school and third grade geography, math and science classes sometimes had her in tears. She refused to open her mouth and even attempt to speak the Hebrew words she knew. Yet, somehow, at Alex, she spoke. Some of the first words she learned in Israelwere gymnastics terms. She knew the Hebrew words for cartwheels and handstands, and had no problem learning, remembering and using the words for chin-up bar and vaulting horse. My kids used their Hebrew there because the environment was loving, warm and accepting. Alex does not teach higher mathematics, does not explain the intricacies of Talmudic Law. Alex is not a rocket scientist. But he is a true educator in every sense of the word.

Alex had the ability to size up each kid, within minutes of being in his class. He knew which kid needed to be ignored for a while, letting him warm up at his own pace and come to him for attention when ready. He knew which ones needed a bit more pampering and compliments. And he knew which ones could handle- and appreciate- his jokes and bantering. The little scrawny kid with glasses whose father put him in Alex’s class to “get tough” was given the most macho nickname from Alex, used with seriousness and respect. The overweight, clumsy kid, sent by his mother to drop a few pounds, received steady encouragement and subtle nudges by Alex to get him flipping over the horizontal bar like everyone else… and he dropped a few pounds! And the really coordinated athletes enjoyed performing floor exercises, learning new moves and excelling outside the classroom.  Children thrived there. He was a model teacher… never raising his voice, never patronizing or demeaning… always aiming at raising up a child’s confidence and feeling of self worth. And what child is not going to learn in such a setting? 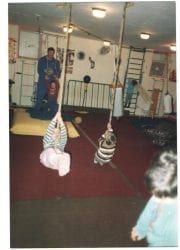 Years later, after my boys were born and it was time for them to join his class, we arrived and saw that the bomb shelter had received an overhaul, with better and thicker mats for the floor and more modern equipment. But the mood, thankfully, remained homey. We walked in and saw kindergarteners hanging off of Alex’s back, another swinging off the chain-hung rings and Alex enjoying it all. Alex pinpointed my son Netanel as having tremendous potential and told him, and me, that if he worked hard, he could be just like the pictures of body builders he has hanging on the walls. Well, neither Netanel nor I saw that as a goal we were interested in. But Netanel enjoyed focusing, for a couple of hours a week, on weight lifting and developing his muscles. Alex would print out nutritional information for the developing boys, telling them which foods to avoid, and for a while Netanel would follow the sweet-free diet, making sure to eat the recommended small snack of carbs before exercising.

Alex is not a religiously observant Jew, but I have never met anyone more respectful, and his tolerance encouraged his mixed group of students to follow suit. In his small, closed room, titles were dropped and Netanel wasn’t the religious kid the secular kids of the neighborhood didn’t go to school with. He was Netanel… the really really strong kid who got along with everyone because he was such a sweet kid. The religious boys would walk into his class and Alex would remind them to remove their ritual fringed garment they wore under their shirts, in order for them to not get soiled and sweaty. As kids’ skullcaps fell off while jumping and running around, Alex would pick them up off the floor and put them on the windowsill, reminding the kids to take them and put them back on, when class was over.

Alex offers gymnastics classes to children from three years old and up. Eighteen-year-old teenagers come to pre-army classes with Alex before they enlist.  Sometimes, they want a chance to build themselves up in order to make themselves ready for the physical challenges and some want to raise their chances of being accepted into the more elitist units in the army.  Young and old adults, men and women alike, also come to his fitness and exercise classes. It’s not an unusual sight to see some 50+ men jogging through the streets at night, panting breathlessly behind Alex, their smiling leader. Besides offering these classes, he has been the physical education teacher for one of our local elementary schools, for years. It’s funny! I see him at local weddings and Bar Mitzvahs all the time, assuming he’s there because he taught the children. But often it’s because the mother of the bride has attended his aerobics class for years! So every segment of the Karnei Shomron population knows Alex and he knows everyone. Alex walks through the streets, oblivious to the cold, wearing shorts and a t-shirt, and has to stop to wave and smile at everyone he passes. 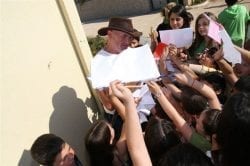 A few years ago, Israel started its own Survivor series on television and Alex was chosen to be a contestant for the first season! He was close to 50 years old at the time but held his own against all the other contestants, many less than half his age. He represented Karnei Shomron with pride and never sunk to the level of in-fighting that sometimes characterizes those programs, never complaining about the discomfort of sleeping on the ground, suffering from mosquitoes and not having enough food. Since then, he has made a side business for himself, doing Survivor-style Day Camps and birthday parties for children, teaching teamwork and offering challenging and fun tasks and activities. And the kids think that it’s the coolest thing in the world to do Survivor activities with someone who was really on Survivor! He even still has his trademark hat and bandanna from his participation in the program years ago.

Alex was born in Belarus, on the border of Poland and Russia, and remembers suffering the sting of anti-Semitism, from people who didn’t like their proud Jewish neighbor, simply because he was Jewish and proud of it. His family was strongly Zionist and when he was thirteen, they moved to Israel. Here, he met his wife and they have four lovely children.  He loves touring the land, taking his family on off-the-beaten-track jeep riding.  Alex is a person to be admired… a true role model.