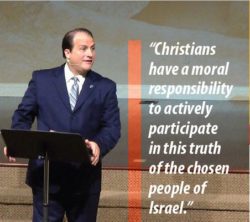 Pastor Nick Plummer’s deep love for Israel started as a seed God placed in his heart; as God gently guided Plummer through his spiritual journey, this seed grew and developed into a great love, deeply rooted in commitment and enthusiasm. For Nick Plummer, supporting Israel is a compelling truth. Pastor Nick, senior pastor at the Hebrew Roots Church Beit Tehila in Brandon, Florida, is a true advocate for Biblical Israel. A vibrant community with a strong affinity for the arts, Beit Tehila holds joyous worship services, expressing their love for God through song, dance, and the performing arts. The church is committed to learning the whole Bible, the Word of God, while
actively nurturing a strong bond with the people of Israel, God’s chosen people to whom He promised the Land.

While Pastor Nick had felt a calling to serve God since early youth, his connection to Israel developed only later. Music colored his childhood home and religious experiences; his Christian identity took shape at church, where his father led guitar Mass. Although as a teenager, young Plummer drifted away from the Catholic church and stopped practicing his faith, God was leading the enthusiastic young man to find the truth.

At the age of twenty-four, Plummer had a spiritual awakening that led him to become a born-again, spirit-filled Christian, newly baptized in the church. Through his search for the right church, Plummer met the Dryer family, with whom he forged a close, lifelong friendship. Pastor Randy Dryer and his wife, Pastor Tehila, noticed Plummer’s potential − his musical gifts and contagious enthusiasm for God – and took him under their wing. They mentored him through his journey, educated him about the significance of Israel and encouraged Plummer to step up and serve as a lay worship leader, preparing him for his next role. As Plummer’s journey towards the truth continued, he felt God stirring a passion for Israel in his heart. Since his first church tour to Israel, Plummer felt a deep spiritual connection to the Land. On his second visit the following year, Plummer became betrothed to Danielle, the Dryers’ eldest daughter. And with each subsequent visit, he developed a deeper understanding of Israel’s importance. 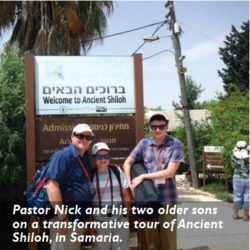 In 2002, only months after Plummer became an ordained associate pastor, Pastor Randy passed away. The church asked Plummer to step up and fill Pastor Randy’s shoes, and he took on the senior leadership role with great humility. His commitment to carry the work of his beloved mentor marked the turning point when Pastor Nick became an advocate for Israel.

But despite many trips to Israel, Pastor Nick still had not visited Judea and Samaria. What opened his eyes to Biblical Israel was his friendship with Avi Lipkin, a Jewish fellow from Jerusalem he had met through his late father-in-law. In 2015, at Lipkin’s encouragement, Pastor Nick visited Lipkin’s son Aaron in Ofra, experiencing a transformative tour of the Biblical Heartland. Joined by his two older sons, Pastor Nick
visited Mount Gerizim – the Biblical Mountain of Blessings. As he looked down at the tomb of Joseph, standing among the vineyards of Samaria, Pastor Plummer witnessed God’s hand in fulfillment of Jeremiah 31:5. Overwhelmed, he was moved to bless his sons there. “It was a game changer!” Plummer recalls, “Christians need to know that many Biblical events happened in this region– in Shechem, Mount Gerizim, Shiloh, where the Tabernacle stood for 369 years – it is a must visit!”

As a powerful advocate for Israel, Pastor Nick regularly invites guests to speak at his church about the Biblical Heartland, and hosts podcasts where he discusses Scripture
and prophecies fulfilled in the Land of Israel. Pastor Nick first learned about CFOIC Heartland in 2018, when Shmuel Junger, Development Director for CFOIC Heartland,
visited him at the church. Once Plummer understood CFOIC Heartland’s objectives, which include educating Christians about Biblical Israel, connecting them to Jewish communities, and providing a vehicle for Christians to get involved, Plummer became wholeheartedly engaged, and enlisted the support of his congregants. From that point, Pastor Nick has enthusiastically collaborated with CFOIC, supporting its  activities, and welcoming Shmuel, and Sondra Oster Baras at his church. On a recent church tour to Israel, congregants made a special stop in Karnei Shomron to visit and have lunch with Sondra and Shmuel. 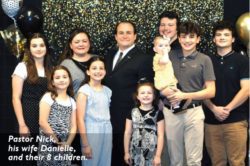 Plummer believes that God is paving the way for him. As a long-time member of the international organization Table of Champions, Pastor Nick recently began advocating for Israel within that forum, encouraging fellow pastors from all over the world to get involved. “The Jewish People, God’s chosen people, are pleasing God when they settle the Biblical Israel,” he declares enthusiastically. He believes that, as the wild branch grafted into the olive tree, “Christians have a moral responsibility to actively participate in this truth of the chosen people of Israel.”