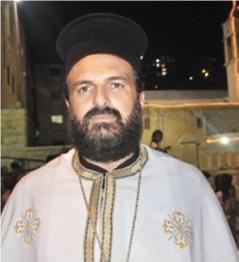 Most Christian Arabs who enlist in the IDF are subjected to scorn and even violent attacks by their Muslim neighbors. The forum not only promotes enlistment and recruits Christian soldiers, but accompanies them through their entire army experience, strengthening them as they stand up to Muslim harassment while working with the army to ensure a smooth acculturation. Thanks to the work of the Forum, the number of Arabicspeaking Christians who enlisted in the IDF in 2013 nearly tripled, increasing from 35 to 100, with another 500 Christians choosing to participate in Israel’s national service. Father Naddaf is especially proud of the number of female recruits who have enlisted– there are even two Christian women officers. “I believe the Land of Israel belongs to the Jewish people,” Naddaf stated emphatically in a recent meeting in his Nazareth home with CFOIC Heartland’s director Sondra Oster Baras. “If you are truly a Christian and read the Bible you have to believe this.” He is eager to connect with Christian Zionists from around the world and Sondra has promised to help facilitate these relationships. 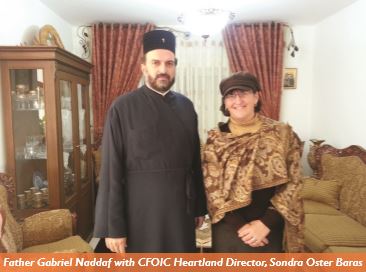 Father Naddaf’s associate, Shadi Khalloul told CFOIC Heartland that he truly understands that “what is good for the State of Israel is ultimately good for us [Arabic-speaking Christians of Israel], and if we’re strong, Israel is strong.” He continued, “Christians all over the world need to understand that our way is Israel’s way. At the end of the day, our roots are Aramaic. We have been in this land from the beginning.” His achievements and hopes for the future have come at a terrible price. Father Naddaf has been excommunicated by the Orthodox Church Council, and the Jerusalem Patriarchate has threatened to strip him of his designation as priest. He has also been illegally banned from one of Christendom’s most sacred sites, Nazareth’s Basilica of the Annunciation. As one may imagine, Naddaf’s cause is not popular among Muslim Arabs either. He has become the target of Arab Members of Knesset. As a result of these public attacks, Naddaf faces threats to his life on a daily basis. Just last month Naddaf’s son, who is about to enlist in the IDF himself, was severely beaten near his home in Nazareth. Despite the danger and fiery opposition, Father Naddaf continues to stand up for Israel, dismissing the attacks as “blatant intimidation geared to frighten young Christians from identifying with Israel as full fledged Israelis.” Naddaf recently met with Prime Minister Binyamin Netanyahu who affirmed his support for Naddaf. Netanyahu also initiated a joint government-community forum to deal with the necessary administrative and legal aspects of Christian enlistment, to protect those who enlist and to improve law enforcement against those who disturb the peace and incite to violence. During this meeting Father Naddaf said, “Our goal is to guard the Holy Land and the State of Israel. We have broken the barrier of fear – the state deserves that we do our part in defending it. Those who oppose the integration of the Christian community in the institutions of state do not walk in the path of Christianity.” CFOIC Heartland’s Israel office is eager to enable Christian groups from all over the world to meet with Father Naddaf and encourage him as he pursues his brave stand for Israel. And hopefully, one day soon, CFOIC Heartland will host Father Naddaf in Judea and Samaria, enabling him to connect with Jews of faith who will welcome his contribution to the people of Israel. Baras: “The cooperation of our two peoples, Christian and Jewish, in the Land of Israel for the State of Israel, represents a truly historic milestone.”