When the Shin Bet – the Israeli military intelligence service – calls, they don’t show up on caller ID. So when Einav’s Head of Security felt his cell phone buzz, he didn’t hesitate at the NUMBER BLOCKED message and answered immediately. “We’re tracing a suspicious vehicle,” the unidentified voice crackled over the line. “We need you to keep an eye on your perimeter, and alert us if you see it.” The voice dictated a license plate number and description, and with a final “Keep us updated,” terminated the call.

A velvety dusk was settling over the red-roofed community of Einav, and the head of security felt his senses sharpen with anxious energy. He radioed the community’s rapid responders and let them know to stay alert, but something inside him was twisting. A suspicious vehicle was out there, a real and present danger, but all he had on his side were a few ill-equipped volunteers from the community. Huge blind spots gaped between the community’s few surveillance cameras, and the head of security knew that threats could be lurking even now along those dark roads, just waiting for the perfect moment to strike. Without surveillance coverage in those areas, he was helpless.

How could he protect them – his neighbors, his community, his friends, his family – without eyes? 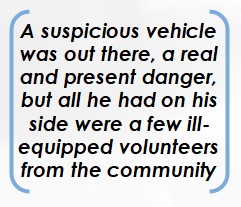 The outcome of that mission is not something we can discuss. But what we can say is a huge thank you — when you heard about Einav’s security needs, and the security needs of so many other communities across Judea and Samaria: you reached out. You helped. You saved lives.

Einav now benefits from a brand-new array of surveillance cameras, donated so generously by Christian Zionists like you. No longer will suspicious vehicles or unknown threats sneak up on them in the dark; now they can protect their perimeter from attacks before anyone gets hurt. But you didn’t just give to Einav.

When Rechalim needed emergency life-saving equipment, you were there. When Dolev needed radios and protective helmets, you stepped in. When Hermesh asked for a security patrol jeep, you answered the call. Over the course of this difficult year, you provided surveillance cameras and security equipment for the communities of Alon, Argaman, Karnei Shomron, Kedumim, Leshem, Mitzpe Dani, Ofra, Otniel, Revava, Sde Bar, Tekoa, and Zufim. The impact you have made is immeasurable.

Thanks to you, the people of the Biblical Heartland can now sleep more soundly. They can walk and work and live in relative safety. And while they may not be completely impervious to the threats of terror from their enemies, you have helped bring them peace of mind as they strive to protect both themselves and their Homeland.