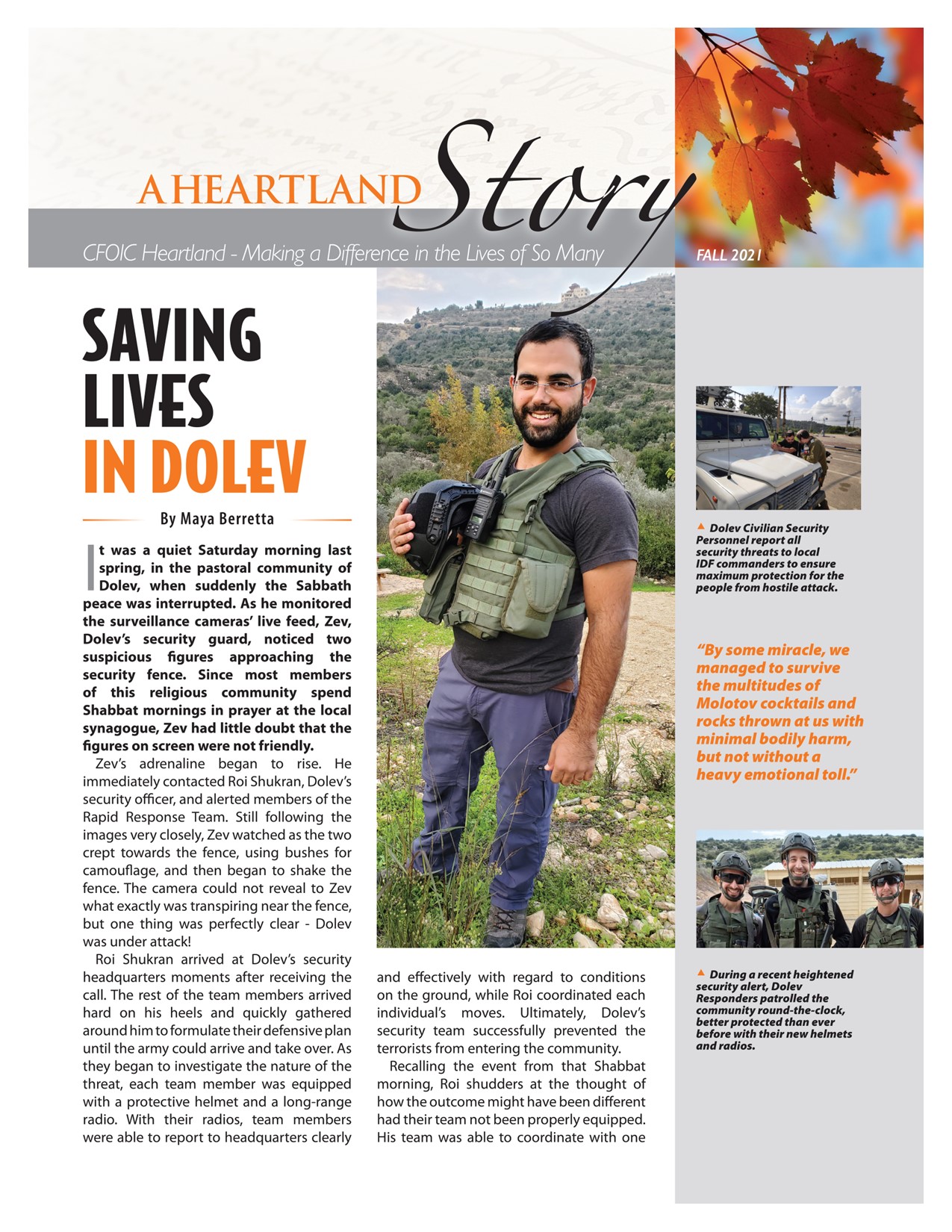 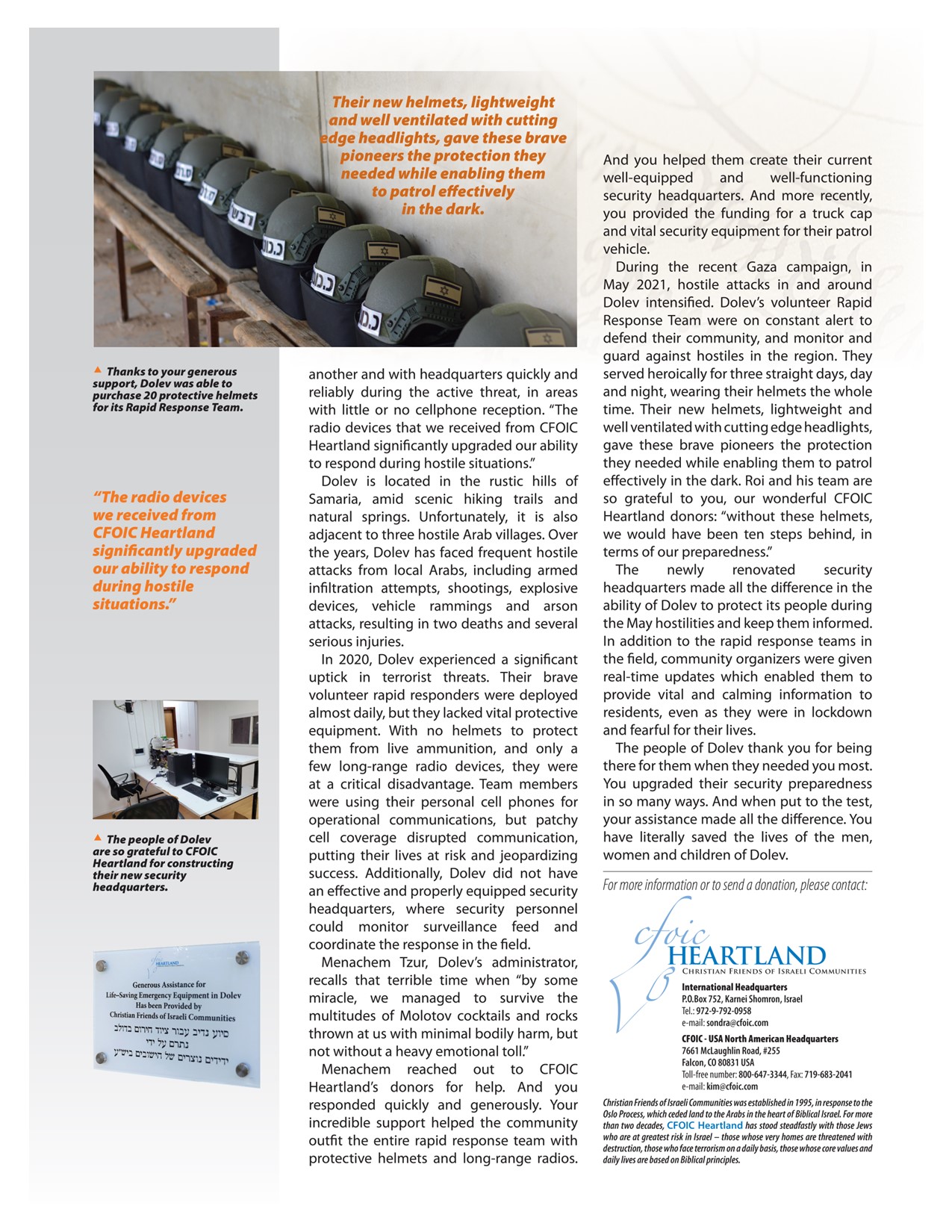 It was a quiet Saturday morning last spring, in the pastoral community of Dolev, when suddenly the Sabbath peace was interrupted. As he monitored the surveillance cameras’ live feed, Zev, Dolev’s security guard, noticed two suspicious figures approaching the security fence. Since most members of this religious community spend Shabbat mornings in prayer at the local synagogue, Zev had little doubt that the figures on screen were not friendly.

Zev’s adrenaline began to rise. He immediately contacted Roi Shukran, Dolev’s security officer, and alerted members of the Rapid Response Team. Still following the images very closely, Zev watched as the two crept towards the fence, using bushes for camouflage, and then began to shake the fence. The camera could not reveal to Zev what exactly was transpiring near the fence, but one thing was perfectly clear – Dolev was under attack!

Roi Shukran arrived at Dolev’s security headquarters moments after receiving the call. The rest of the team members arrived hard on his heels and quickly gathered around him to formulate their defensive plan until the army could arrive and take over. As they began to investigate the nature of the threat, each team member was equipped with a protective helmet and a long-range radio. With their radios, team members were able to report to headquarters clearly and effectively with regard to conditions on the ground, while Roi coordinated each individual’s moves. Ultimately, Dolev’s security team successfully prevented the terrorists from entering the community. Recalling the event from that Shabbat morning, Roi shudders at the thought of how the outcome might have been different had their team not been properly equipped. His team was able to coordinate with one another and with headquarters quickly and reliably during the active threat, in areas with little or no cellphone reception. “The radio devices that we received from CFOIC Heartland significantly upgraded our ability to respond during hostile situations.”

In 2020, Dolev experienced a significant uptick in terrorist threats. Their brave volunteer rapid responders were deployed almost daily, but they lacked vital protective equipment. With no helmets to protect them from live ammunition and only a few long-range radio devices, they were at a critical disadvantage. Team members were using their personal cell phones for operational communications, but patchy cell coverage disrupted communication, putting their lives at risk and jeopardizing success. Additionally, Dolev did not have an effective and properly equipped security headquarters, where security personnel could monitor surveillance feed and coordinate the response in the field.

Menachem Tzur, Dolev’s administrator, recalls that terrible time when “by some miracle, we managed to survive the multitudes of Molotov cocktails and rocks thrown at us with minimal bodily harm, but not without a heavy emotional toll.”

Menachem reached out to CFOIC Heartland’s donors for help. And you responded quickly and generously. Your incredible support helped the community outfit the entire rapid response team with protective helmets and long-range radios. And you helped them create their current well-equipped and well-functioning security headquarters. And more recently, you provided the funding for a truck cap and vital security equipment for their patrol vehicle.

During the recent Gaza campaign, in May 2021, hostile attacks in and around Dolev intensified. Dolev’s volunteer Rapid Response Team were on constant alert to defend their community, and monitor and guard against hostiles in the region. They served heroically for three straight days, day and night, wearing their helmets the whole time. Their new helmets, lightweight and well ventilated with cutting-edge headlights, gave these brave pioneers the protection they needed while enabling them to patrol effectively in the dark. Roi and his team are so grateful to you, our wonderful CFOIC Heartland donors: “without these helmets, we would have been ten steps behind, in terms of our preparedness.”

The newly renovated security headquarters made all the difference in the ability of Dolev to protect its people during the May hostilities and keep them informed. In addition to the rapid response teams in the field, community organizers were given real-time updates which enabled them to provide vital and calming information to residents, even as they were in lockdown and fearful for their lives.

The people of Dolev thank you for being there for them when they needed you most. You upgraded their security preparedness in so many ways. And when put to the test, your assistance made all the difference. You have literally saved the lives of the men, women and children of Dolev.