Change is not Always a Good Thing

I began my day writing salary checks for my employees, then proceeded to write receipts for some donations that had just come in, all the while reminding myself to write 2018.  And all the while saying to myself, I can’t believe another year has passed.  It seems like just yesterday that I was getting myself accustomed to writing 2017.  Where did the year go?

It is a common wisdom that as we get older, time seems to fly by faster.  I am not sure why that is the case but it just is.  I remember as a child counting the seemingly endless days from mid-May to mid-June when school ended for the year.  Time could not move fast enough for me.  And today I feel like I can barely catch my breath and keep up.

So what can we look forward to in 2018?  This morning I received emails from several friends in Australia complimenting me on an interview I had done on a local radio station.  But I had actually done that interview a year ago.  And I believe it was aired then.  But it was re-aired today.  I listened to it again online and discovered how timely it was.  There was no reference to a particular event or date that would indicate that the interview was actually recycled.  And, indeed, the subject matter of the interview was as  relevant today as it was then — the legitimacy of the so-called settlements and the Jewish right to Judea and Samaria.  There was also mention of Jerusalem.  In the wake of President Trump’s recognition of Jerusalem as the capital of Israel and the subsequent stir that  momentous decision has created in the international media, it makes sense that this interview would have been aired.  What is so telling, however, is that the interview is as relevant today as it was a year ago.  And frankly, the interview could have been conducted 10 years ago and it would have been the same.

So what has changed?  There are stirrings today in the Arab world that we never saw before that are a bit different.  There are young Arabs who are not infected with radical Islamic fervor and who look upon Israel with envy, even admiration.  They see our success in technology, medicine and science; they note our universities, our tremendous growth in population and development.  Unlike in their countries where a growing population often creates greater poverty and burdens the economy, in our country where we have welcomed millions of new immigrants over the past 70 years and encourage growing birth rates, this increase in human resources has enriched our country exponentially.

And they look at their own governments, whether in wretched dictatorships, countries plagued by civil wars or in the corrupt and incompetent Palestinian Authority, and they realize that the Arabs living in Israel, including those in Judea and Samaria, are better off than they are.  More and more Arabs today understand that they would do better cooperating with Israel rather than fighting her.

Is this a majority of Arabs?  I don’t believe so, although I recently met with a fascinating Palestinian fellow who is confident this newer approach does represent the majority.  But it does bode a subtle, long-term change.  Does that mean that my interview won’t be relevant next year?  It probably still will be.  But perhaps the note of optimism that I express at the end of the interview will become closer to reality in another decade or so.  Or perhaps in another century.

One thing that does change from year to year, and especially as we get older, is the recognition of how much of our lives is not in our control.  Every year, we remember people who are no longer with us, who have passed away in the previous year.  Many are older and their time had clearly come.  But others meet their end in tragic circumstances.

Yesterday, a young woman passed away and an entire nation paused to mourn her.  She was Yaffa Glick, young wife of MK Yehuda Glick, who had suffered a sudden stroke some months ago, had been in a coma for most of the time since and passed away yesterday.  She was only 51 years old.  She had 2 children of her own from a previous marriage when she married Yehuda, they had 4 children of their own and then fostered 2 additional children who needed a warm and loving home.  Eight children grew up in that loving family and are mourning her loss today. 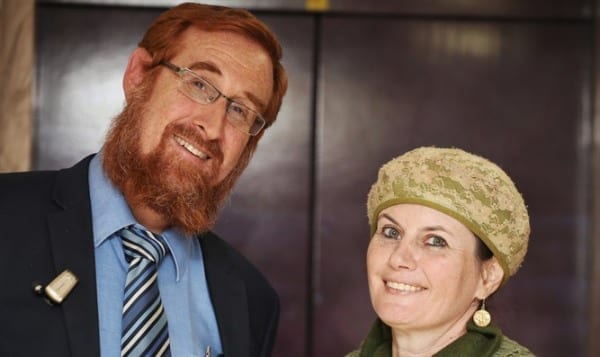 “You taught me to say I love you,” Yehuda eulogized his young wife.  He talked about how she had helped him to develop his emotional side and how they had walked side by side, in love and in partnership for so many years.

MK Yehuda Glick has been a pioneer in advocacy for Jewish access to the Temple Mount.  Indeed, Yehuda believes that all peoples everywhere should have the right to pray on the Temple Mount, and in that way bring closer the fulfillment of Isaiah’s timeless words:  “And many nations shall go and say: Come let us go up to the Mountain  of the Lord, to the House of the God of Jacob, that He may instruct us in His ways and that we may walk in His paths.”  (Isaiah 2:3)  Since becoming a Member of Knesset Yehuda has welcomed Christian Zionists as the true allies of Israel they are and has been a true friend to CFOIC Heartland as well as to so many of the Christian organizations that support Israel.  We offer our deepest condolences to him.

We cannot know what 2018 will have in store for us.  Will we lose a loved one?  Will we suffer illness or tragedy?  I certainly hope not.  But we are not in control.  We can do our best; we can do what we believe G-d is expecting of us, but we know that G-d is in control.  May He bless us all with a wonderful 2018.