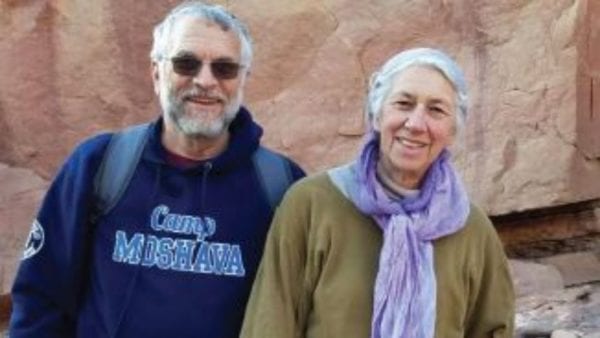 Chaim met Naava as a teenager through the religious Zionist youth organization Bnei Akiva. Their early lives paralleled each other: both were raised in New York and both were very active in their respective Bnei Akiva chapters as counsellors. In fact, in 1974, they were both counsellors at a Bnei Akiva summer camp where, “coincidentally”, Sondra Oster Baras was a camper. Naava and Chaim each spent a year in Israel after high school volunteering on a kibbutz, and they both knew from a young age that they wanted more than anything to make Aliyah. After dating for some time, Chaim knew she was the one.  He pursued her relentlessly with no success.  Finally, Chaim was about to give up and move to Israel on his own, when Naava came to Chaim and said simply, “Let’s get married.” That sealed it.

They spent their first year of marriage in Israel, with Chaim in yeshiva and Naava in university. Aliyah pulled at them, urging them to stay, but the couple knew that they still had a few loose ends to tie up in America before they could make the move permanently. That summer, they returned to the US and worked as head counselors at Bnei Akiva’s Camp Moshava. That experience kindled something deep within Chaim – a love of education, teaching, and Zionism, which would drive him and motivate him for many years to come. For the next two years, while Naava finished up her BA, Chaim decided to pursue his MA in Jewish Education.

On December 31st 1977, Chaim and Naava finally made Aliyah, and it was the first of many dreams to come true. “Living in Israel is creating history, living history,” says Chaim. “Living outside of Israel was like watching history pass you by.” Armed with their Zionist idealism, the Livnes settled first in Maale Gilboa, a small kibbutz in the Galilee, and then later moved to Judea, where they settled in Bet Yatir. The Livnes had a true pioneering outlook, and any time something in the community needed doing, Chaim and Naava were there. “Naava especially,” says Chaim. “She was dedicated and selfless. Her entire life force went towards trying to help others.”

In Judea, Chaim spent a number of years as the administrator of various communities, always pushing the envelope on Jewish education and helping to found a breakthrough pre-army preparation school in Bet Yatir. It was at that time that Sondra Oster Baras reconnected with Chaim. A chance meeting at a Bnei Akiva reunion in Jerusalem enabled Chaim to learn about the work Sondra was doing with the communities and he quickly joined up. Ever since, Sondra has been involved in raising funds for whatever community Chaim has been connected with.

In Bet Yatir, Naava became a quiet pillar of the community. She was a model of humility and service, and was always willing to take on the jobs that no one else wanted, because she believed that even the smallest jobs were vitally important. During the First Intifada, Naava worked at a library in nearby Sussya, and she routinely braved the dangerous roads of the Hebron Hills in order to ferry books between the library branches. “She did it for the children,” says Chaim. “She would do anything for them, and she did.”

A number of years ago, Chaim made a career change and became the administrator of a local elementary school in the nearby community of Efrat, and Naava left the library in Sussya to take charge of the Efrat library. Naava was totally committed to the library. “She would sleep in the library sometimes,” Chaim remembers, “just to keep the door open, to make sure that no child ever had to be turned away.”

After twelve years at the Efrat school, Chaim decided it was time for a change. Each year, he would spend the school months in Efrat and the summer months in Camp Moshava with his family, engaging with the next generation of young Zionists and educating them about Israel and Judaism. Chaim felt that the camp was his true calling, and wanted to spend more time there, but he just couldn’t figure out how to combine that with a steady job.

That was when Rabbi Natan Greenberg, Naava’s brother and the founder of the Bat Ayin Yeshiva, offered Chaim the position of Executive Director. Chaim was finally able to live his ideal life of education and teaching. During the school year he ran the Bat Ayin Yeshiva, and in the summers he ran Camp Moshava in the US.

Chaim believes that the yeshiva “survives on miracles.” There was a cycle: the yeshiva would run out of money and couldn’t pay salaries, and then a mysterious donor would appear with the exact amount of money necessary to keep the yeshiva afloat. Watching Chaim work in the yeshiva was one of Naava’s great joys. She had a special place in her heart for the yeshiva, having seen firsthand how it was able to change students’ lives for the better.

Naava Livne passed away suddenly just a few months ago. Her husband Chaim says that the most important lesson he ever learned from Naava was one of giving. He recalls a speech that she gave as a teenager, long before they were married, at an International Bnei Akiva Conference: “In her speech, she said, ‘A person can never give enough of themselves.’ And that’s the way she lived her life.” Today, in Naava’s memory, her beloved Bat Ayin Yeshiva is working to erect a brand-new building, so that a whole new generation of students can learn and grow and settle the land of Israel. CFOIC Heartland has long been a supporter of the Bat Ayin Yeshiva and has joined hands with Chaim to raise funds for this amazing need in Naava’s memory.

One cannot tell the story of Chaim Livne without also telling the story of his wife Naava. Chaim and Naava, true Israeli pioneers and Zionist trailblazers, have a legacy that will not soon be forgotten. Hundreds – if not thousands – of souls have been touched by the Livnes and God willing, after Naava’s passing, Chaim will continue to carry that torch into the future.