Sandy Bloom, raised in the US with a love for Israel, spent the year after high school, on a kibbutz. She studied Bible, worked in the fields, and grew to love the people of Israel. The year was 1973 and when the Yom Kippur War broke out, the crisis made her feel especially connected to Israel.

Sandy married Dov Bloom in 1977, and two years later they moved to Israel. They spent eighteen years on a beautiful kibbutz on Mt. Gilboa where their three children were born.

In 1988, at the beginning of the first Intifada, Sandy and Dov left their children with their grandparents and took a bus to Jerusalem. They had dozed on the bus when, near Jericho, terrorists threw Molotov cocktails right through the window where Sandy was sitting. She woke up to screams and smoke and somehow managed to get off the bus. A stranger grabbed her and pulled her into a ditch of water — she hadn’t even realized she was on fire! Later, she learned that the waterbed she was thrown into, Elisha’s Stream, was usually dry … but that day it was full of water! She was overwhelmed by the gracious hand of God that provided this water in the middle of the desert, where and when she needed it, and she couldn’t help but think of the miracles Elisha had wrought at these same waters during Biblical times.

Sandy remembers three thoughts going through her mind: “1. G-d didn’t want me to die. 2. Somebody saved my life and I don’t know who it is. And 3. Where is my husband?” A second guardian angel had seen her husband, trying unsuccessfully to roll on the ground and extinguish the flames licking at his body, and jumped on him, stifling, with his own body, the horrible fire.

While waiting for the ambulance, Sandy started to question whether she had done the right thing to leave the U.S. And it was then—at that moment— that she said to herself, “This is where I want to be. I’m not going anywhere and nobody’s pushing me out of here.”

It was a long rehabilitation for Sandy and Dov. They spent almost six weeks in the Burn Unit of a Jerusalem hospital where they suffered excruciating pain, surgeries, skin grafts, and months of wearing pressure garments. Sandy is left with physical scarring on her neck and face which will always bear witness to her touch with terror, and emotional scarring that has only made her stronger. Sandy admits there were dark periods of pain and uncertainty, when the only thing that kept her going was her belief in G-d.

In 1998, the Bloom family left the kibbutz and moved to Bet Yatir, an isolated, breathtakingly beautiful community in the southern Hebron Hills. Sandy loves her small religious “moshav”- an agricultural cooperative, where they have vineyards, orchards, field crops, chicken coops, a dairy barn and a winery. The community is like a family. There is one synagogue where they pray together. They celebrate Israel’s Independence Day together. The children can roam freely with their neighborhood friends.

Sandy has always involved herself in Bible study. It is not unusual for her family to sit around the Sabbath table, discussing that week’s Torah portion, sharing different commentaries’ views. She spends one day a week at a Bible College in Gush Etzion, where she enjoys classes given by fascinating scholars and rabbis. The rest of the week is taken up with her family and her freelance translation work.

Sandy meets CFOIC Heartland groups in Bet Yatir and often shares her personal story with them. They love her passion, her optimism and her openness. But Sandy says that she, too, gets so much from meeting the wonderful people of CFOIC Heartland. She is moved that so many Christians are willing to come visit. She remembers one group standing at the Bet Yatir vineyards crying, moved by the miracle of where they were and what they were seeing. “They reminded me that we are living a miracle. That where there was once desert there are now vineyards bursting with crops of grapes planted in the very spot where the Israelites planted grapes in the days of the Bible, when Joshua assigned this portion to the tribe of Judah. Our Christian friends understand what a miracle it is to live in G-d’s Promised Land.”

Hardly a day goes by that Sandy does not run into some physical sign of CFOIC Heartland’s help to her community: the facilities at the library, the playground equipment, the bus stop, and the electrical door for the kindergarten. “I am touched that you consider us your friends, that you see our enemies as your enemies, that you consistently come to our aid.”

Sandy… may you always keep your pioneering spirit alive, in good health, surrounded by the people. 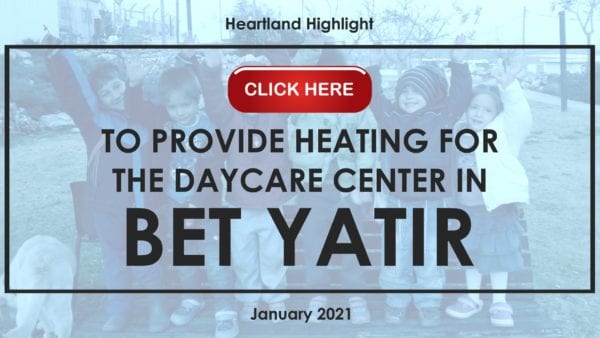