Noah and her Magic Touch

Twelve years ago Noah Mandelbaum was a kindergarten teacher for four and five year olds in Carmei Zur, a community in the Etzion Bloc. A chance encounter with a Jerusalem family introduced her to their Down Syndrome child who was not finding an appropriate school placement. Noah had this boy on her mind all day, and the next day, during “Circle Time” with her young class she told them about this boy with nowhere to go. The children were quick to respond: “Have him come here. We’ll be his friend!” By passing any formal authorization procedure, this nine year old special- needs child named Chanan joined the class. The municipality learned of the situation and decided to investigate. Upon their arrival, the officials were greeted with a sign in childish block letters on the kindergarten door: “Dear municipality, Please don’t take Chanan. We love him.” By the end of the school year Chanan had a group of friends; Chanan was reading. Noah said, “Where other institutions of special education had failed, we succeeded. The children and I, with devotion and open hearts, attention and structure, gave him what he needed.”

Noah had no formal special education training. She attributes her success to growing up with a mother who had a magic touch with children. Noah’s mother involved her children in everything, and everything became a learning experience. She remembers her mother always saying, “Noah, hold this with me; do this with me; now you try.” Maybe that’s why Noah always wanted to be a kindergarten teacher. Her education at the hands of this extraordinary woman gave her the best informal training possible. Her mother is eighty five years old and is still teaching children! Noah inherited this magical touch with children. 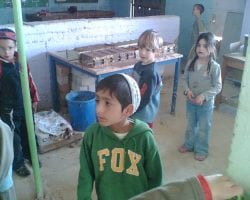 A school approached Noah to direct their program. She replied that there was one condition. She had a boy named Chanan with problems and another boy named Shalom who had joined them. They were part of the package. “I was only willing to come if Chanan and Shalom would be allowed to be in the same classes with everyone else! I decided I would go where they were allowed to go.”

The school agreed and Noah started to work. Word spread that there was a woman out there who cared. Soon there were eighteen special children integrated into regular classes. “It simply happened and we had to hire extra staff. The special program with its special mix didn’t turn people off. It was a draw and soon we were oversubscribed.” When they needed to move, Noah rented some houses in Rosh Zurim and she moved in with the children of all ages that she had accumulated. What Noah loves about being in Rosh Zurim is that her students have space; they have families around them; they are part of a community. Now there are two parts of the school, called Sadna, which literally means workshop. One is a regular elementary school with 400 children but includes approximately four special-needs children in each class. The other has forty special-needs boys from age twelve to twenty. Remember Shalom? He’s there, doing wonderfully well.

Not one to rest, when Noah heard that Down syndrome children do well with horses she found a counselor, bought a horse and started a riding therapy program. The older special children learned to care for the horses and their success triggered in Noah the need to find other sources of employment for these special people. “It’s clear to me that you can’t expect to close them up in a room with other Down kids and have them count out eight thumbtacks and put them in plastic baggies!”

The most worrisome part of caring for special children is knowing that they will always need care. Sadna thinks about their future and boasts a variety of vocational and recreational workshops. Nothing can take the place of real work experience in developing professional skills. There is an educational hothouse and workshops in weaving, ceramics, carpentry, recycling and photography. The special child is usually in the position of taking and needing. Sadna believes these children should learn how to get their hands dirty and start giving back, and their Dairy Farm allows the children to care for the goats, milk them and produce yogurts and cheeses. Much activity takes place in the extensive animal areas and in the workshops. “At Sadna, the theory of integrating children with special-needs into a regular framework is put into practice to an extent that is unprecedented in Israel. The school has proven to be one of the greatest successes in Israeli special-needs education,” remarks Noah. At Sadna, the children with special-needs are treated as equals. Whether they suffer from Down’s syndrome, autism or cerebral palsy, each child has his own program designed to help him realize his full potential. Sadna even has a therapeutic zoo, which enables students to learn about animals, establish contact with them, feel unconditional love and acceptance, and practice caring for someone other than themselves.

“I believe this amazing job was sent to me by God, in the form of a remarkable boy named Chanan.” Noah’s family is very supportive and accepts the constant presence of special children in their home. Her husband Yitzchak is a psychologist with his own clinic. Her six children grew up taking it for granted that their good fortune and good health would be shared with others. Her youngest child explains to his friends that his school is not good in spite of having special children integrated into the program, but rather because of it.

Noah- may you keep having the stren