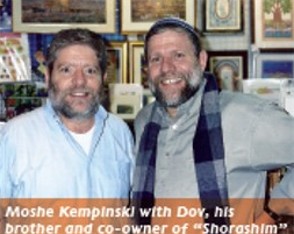 Growing up, Moshe recalls hearing the shoemaker’s story. People would come to the shoemaker with shoes that needed repair. And this wise man would talk and listen as he worked, unerringly uncovering and discovering a need. And he would mend both the troubled soul and the broken sole.

Moshe wanted to be this man, this store, this address for people who had something to say and a thirst to listen. Twenty seven years ago, Moshe Kempinski moved to Israel, and, together with his brother Dov, opened Shorashim (“Roots”) in the Jewish Quarter of Jerusalem’s Old City, hoping this special store would allow people to search and learn. He maintains that “Nobody comes to Israel without being invited by G-d. And though people may not know what drew them here, they know it is not meant to be another beach vacation on the Riviera.”

Nothing was advertised anywhere, but Shorashim soon became a favorite stop for Christian tourists. As many as four groups can show up in one day. And when they do, Moshe and Dov shut the door to outside interruptions, invite group members to gather round, and they perch on the plastic stools kept handy, or even settle themselves on a step. “And we talk.”

“The shop is a safe place, a welcoming place where we all have the opportunity to talk… not to argue. There is no agenda here. I’m not out to convince anyone of anything.” Moshe wants to help visiting Christians “understand our understanding of what Judaism is about. I want to share what we know and perhaps help them see some things they don’t know.” Discourse is not limited to the theological; the shop talk often turns to the political and practical, as Moshe explains his views on the so-called peace process, the Expulsion from Gaza and introduces Christians to the pioneering communities of Judea and Samaria.

People can ask anything they want. Moshe and the shop’s reputation precede them and people come ready with questions they know Moshe will be glad to answer. Nobody has their guard up because the environment is open and relaxed. “I treat everybody as if they’re holy; I was always taught ‘Love your neighbor as yourself.’” And people keep coming back for more. Moshe feels that “Real growth begins when our discussions become less about debating our differences and more about trying to understand what we both love and don’t fully understand: G-d and the Land of Israel.”

The shop is so much more than another Judaica store. Everything sold in the shop—every piece of artwork and jewelry, each book– is Torah- based—has a connection and inspiration from the Scriptures. On sale at the shop are Moshe’s two books for the Christian audience: “The Teacher and the Preacher” and “The Heart of the People”, which answer questions about verses in the Scriptures and offer ways for Christians and Jews to join together by focusing on their mutual faith.

Moshe works closely with CFOIC Heartland’s Sondra Baras in enabling Christians to experience the vision of the settlement movement, and these two pioneers in Christian-Jewish relations share experiences and insights as they travel an often challenging path. Moshe is first and foremost an educator, and he feels privileged to be there for people as they unc