It was a hot summer day in August of 2005. Close to 10,000 Jews had been forcibly evacuated from their homes in Gush Katif just a few days earlier and Sondra Oster Baras, Israeli director of CFOIC Heartland, was looking for Dror Vanunu. Dror headed up the international effort to stop the Disengagement and that included meeting the many Christian groups connected with CFOIC Heartland that visited Gush Katif in the final year of its existence. But once the soldiers entered Gush Katif, Sondra lost contact with Dror. 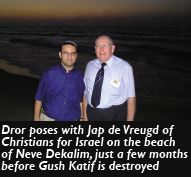 Dror was raised in Ashkelon and remembers his high school visits to Gush Katif to volunteer in the greenhouses. “I fell in love with the sea and felt at home in Gush Katif from the very beginning.” In 1995, at just 20 years of age, Dror married Keren, and they moved to Neve Dekalim. Dror enrolled in the Yamit Hesder Yeshiva program, where he combined his military service with Bible and religious studies. And in 1997, their first child and only son was born.

In 1999, while studying Middle Eastern Studies in Bar Ilan University, Dror began working part-time to encourage tourism to Gush Katif. Later on, he took over the fundraising and international relations responsibilities for the entire Gush Katif region and it was in that position, that he first began working with Sondra Baras and CFOIC Heartland in 2002. In 2000, the Second Intifada began, and with it came a significant rise in terrorism aimed at the Gush Katif communities. Children were killed and injured on their way to school. Neighbors experienced miracles as their lives were spared when their homes took a direct hit. And yet, the Vanunu family did not even consider leaving. “We had two beautiful children and a third on the way. We had friends and we felt part of a community that reflected our most fundamental values. We built beautiful synagogues where we studied Bible together and we helped one another. But most of all, we had faith. We believed that we were doing what G-d wanted us to be doing by settling the Land of Israel. Our neighbors were farmers who had turned the desert into fertile land, exporting flowers and vegetables all over the world. How could we let the terrorists drive us away from all this?” Looking back, Dror realizes their campaign to prevent the Disengagement was doomed from the start. “Sharon had decided and he co-opted every important institution to support his decision. The left was on his side and he succeeded in convincing most of the Likud Members of Knesset to vote with him. The political opposition just did not have the numbers. And the press and the courts gave him their support as well. We had no chance,” explains Dror. But was it all a waste? Did anything good come out of the struggle? 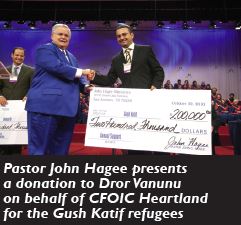 “Throughout the struggle, we focused on ideology and values. We talked about faith and hope. We brought a different discourse to the Israeli political discussion. Dr. Anat Rot just wrote a book about her experiences in Gush Katif. She was an extreme leftwing sociologist and political activist and came to document the struggle. But what she experienced in Gush Katif, the idealism and the faith shook her to her very core. She became religious and completely changed her political outlook. And her story is not unique. Large segments of Israel’s population are seeking a better understanding of what a Religious Zionist is, because we still live by the values that so many of them have forgotten. And our own Religious Zionist leaders are realizing, for the first time, that they can provide leadership for a much broader segment of the population.” 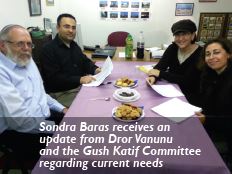 Ten years later and the story is not over. Hopefully, within the next year, these families will all be settled in permanent homes but even then, the story will not really be over. Because the spirit of Gush Katif, the spirit that sustained faith, kindness, and courage, will live on forever.