Shu Rimel: The Power of Community

All of us have experienced tragedy and loss. Whether it be the passing of a grandparent, a parent, a sibling or close friend, or, God forbid, a child, loss catches up with all of us eventually. Often during this time of immense emotional upheaval, we feel overwhelmed, but also wholly and profoundly alone. Consumed by What Has Happened, we drift – and it is common to forget about things as basic as cooking, grocery shopping, cleaning, or even looking after our children.

Imagine how different your sorrows and your difficult times would be if you were not alone, if there was someone – or a lot of someones – looking out for you. Imagine some of the weight lifted off your shoulders. Imagine the burdens of mundane, everyday routine lessened. Imagine the inner strength that comes with knowing that your entire community – close friends and strangers alike – stand with you and support you.

Would you still feel alone?

Late Saturday night on November 30th, 2019, Shu Rimel and her husband Yogi were awoken by a phone call that plunged their family into chaos. Shu’s son Ephraim, his wife Tzippy, and two of their children – twelve-year-old Itai and three-week-old Noam – had been in a terrible car accident. A reckless driver had barreled right into their car at 180 kilometers per hour (112 mph), killing Tzippy and the baby instantly, and Ephraim and Itai had been rushed to the ICU for emergency treatment. They were both badly injured and fighting for their lives.

It was a nightmare to end all nightmares. Every factor was there for Shu and Yogi to spiral right into those feelings of desperation and loneliness. But they didn’t – because they were not alone.

Shu had grown up in a Zionist family in the city of Chicago in the United States. As a child she was involved in the international Religious Zionist youth movement Bnei Akiva, attended a Jewish school and a Zionist summer camp where she met Sondra Oster Baras (as teenagers!), and spent years in Israel after high school learning about Judaism and the Bible. Shu married Yogi in 1982, and the two of them made Aliyah in 1989. After visiting a few communities before their official Aliyah, they decided on Neve Zuf as a good place to start.

“People were very friendly,” Shu recalls. “They organized everything in the apartment for us, so there were beds, a refrigerator, a stove – everything we would need until our lift came. That first night, we couldn’t even go to sleep because people were just knocking on the door, to see who were these crazy people who came from the airport straight here!” The Rimels had been open about the fact that they had no other family in Israel, and the residents of Neve Zuf stepped in to fill that gap without hesitation. Shu and her family were bombarded with invitations to join other families for Shabbat, dinners during the week, and community activities. It was a huge departure from what Shu had been used to when growing up in Chicago, where people mostly stuck to their own social groups or small synagogue networks. “We were looking for a community that would envelop us, and we definitely found that in Neve Zuf.”

And they were indeed enveloped into the community. In the years since they made Aliyah, the Rimels became a pillar of the community, with Shu working in the community office and Yogi single-handedly establishing a volunteer network of firefighters and EMTs. Everyone in Neve Zuf knows them. And so it was that within an hour of Shu and Yogi arriving at the hospital after the accident, “People from the community just started showing up.”

The volunteer mayor and community administrator took over the funeral arrangements and all the preparations necessary for shiva, the seven days of mourning after a death. Shu and Yogi spent the first two weeks after the accident in the Shaarei Zedek hospital, watching over Ephraim and Itai until well into the night. Volunteers from Neve Zuf – neighbors, friends, and even strangers – took turns sitting with them, keeping a constant vigil on not just Ephraim and Itai but Shu and Yogi as well. “People from the community, people we didn’t even know personally, came and slept over at the hospital to make sure we were all okay. People just helped.” 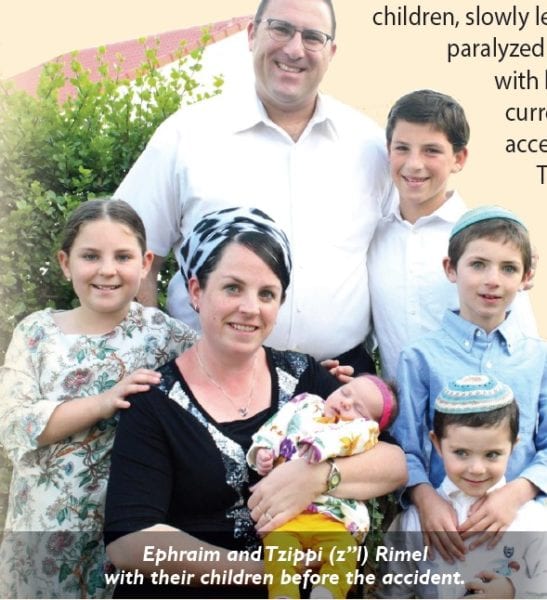 The staff at the hospital were floored. They had never seen such an incredible outpouring of support from such a huge number of people. And every day, more and more people arrived to offer support. They brought food to the Rimels and to Tzippy’s parents, cleaned their homes, took care of Ephraim’s three other children, and ferried the children between their home in Neve Zuf and the hospital so they could visit their father and brother. “People were just taking care of us, 24/7,” says Shu. “They took care of everything we could possibly think of, and even things that we didn’t think of, that we didn’t realize we needed.”

Itai, who had sustained a head injury, lost one leg, and was in a coma for months, is now at a special rehab hospital for children, slowly learning how to walk and speak again. Ephraim, paralyzed from the waist down, will be back at home with his children as soon as he can – renovations are currently underway to make his home wheelchair-accessible, and are due to wrap up very soon. The doctors have called them both medical miracles.

Shu is particularly grateful to the outpouring of support from Christian Zionists outside of Israel, who sent cards and donated generously to help Ephraim, in addition to their regular support of Neve Zuf. “We as Jews have many enemies amongst the world, so we need all the friends we can get. Christian Zionists are some of our best friends,” says Shu. “Thanks to them and our community, we made it this far. We’re looking forward to the future.”