Joy Heylen – An Aussie On a Mission for love 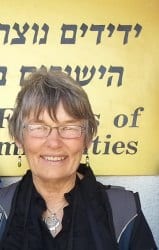 Australian Joy Heylen came to Israel for the first time in 1999. She admits she didn’t have a clue about Israel but then she started reading… Isaiah… Zechariah… “And suddenly I saw it all and started meeting with others who loved Israel.”  In 2001 Joy visited the Kotel for the first time.  She touched the wall “and I was down like a pack of cards.  I started sobbing, feeling like the Shechina— the Holy Spirit of God—had never departed from this place.”

Joy has returned to Israel every year since… sometimes twice.   “There’s something about the people, the land.  In Australia I feel like I am in exile.  In Israel I feel closer to God.”

And then, in 2003, Joy came to Shiloh on a Feast Tour with CFOIC Heartland.  It was her first time visiting Judea and Samaria and the rest, as they say, is history.  Little by little, through talks with director Sondra Oster Baras and through readings on her own, Joy realized what God wanted her to be doing with the settlements.  And she likes to use the word settlements (a word which the media uses disparagingly), because that’s what the Israeli pioneers of the Biblical Heartland are doing— settling the land.  Joy learned that the so-called settlements make up a very small part of Judea and Samaria.  “And the world says Israel is occupying Palestinian land? Pushing them out of their land? Such lies!”

Joy’s indignation at the injustice of it all is filled with infectious passion.  Through CFOIC Heartland, she meets with the Jewish pioneers of Israel: “We see you as being on the front line.  You are running the gauntlet.  When even your own government turns on you, you don’t fold.” She understands that it is Israel’s faith that keeps them optimistic, their love of God, the Torah, their land and their families.

Joy believes that many Christians are interested in Israel but not in Judea and Samaria and she became committed to educating them.   “I was driven!  I wanted people to understand the real issue and NOT to believe that if Israel gave up Judea and Samaria there would be peace. Do the Jewish people have a covenant with God or not? They must never ever ever give up the land!!” Joy and Sondra have a wonderful relationship.  They meet up often at a favorite coffee-shop in Jerusalem and it is not unusual for Joy to bring along a few friends who “just need to hear what Sondra has to say!”  During her visits to Israel, Joy spends three months at a time in a Prayer House in Jerusalem, where Christians take shifts, worshipping and praying for Israel and her people.  She takes it upon herself to meet Christian groups in the Land and whenever possible brings them to Samaria. CFOIC Heartland’s Israel director Sondra Baras has been traveling to Australia each year since 2011 and Joy has done so much to make those trips a success.  Joy arranges hosts for home meetings; she connects with churches, pastors, arranges the venues and remarkably finds new audiences every trip.  So it was only natural for Joy to become CFOIC Heartland’s Australian representative.  Victoria is Joy’s territory but, “Joy has driven me halfway around Australia… New South Wales and Queensland!  “She has an amazing volunteering spirit,” recounts Baras.  And more often than not, Joy and Sondra are joined by Marion Sully, a fellow Aussie and Bridges for Peace Representative who has been a great advocate for CFOIC Heartland in Australia as well.

Joy, an energetic grandmother of 10 responds modestly. “I just know a lot of people in Christian circles.  I ask the Lord for guidance and He leads me, from person to person.  It’s actually an honor to be CFOIC Heartland’s representative.  I have a passion for Judea and Samaria and I want to share what I’ve learned.  You either get it or you don’t!”  A social worker by profession, Joy feels that her training gave her the skills vital for meeting people, gathering information and disseminating it to others. ANZAC is a magic word for Australians.  It stands for the Australian and New Zealand Army Corps and represents a rallying point for Australian national pride.  In the decisive Battle of Beersheva, the ANZACs turned the course of World War I in the Land of Israel and paved the way for the British Mandate, which in turn led to the creation of the State of Israel.  In fact, just days after the Battle of Beersheva, in the autumn of 1917, the Balfour Declaration was issued by the British Government.

For Joy and for so many Australians, the ANZAC victory in Beersheva has become a symbol of the Australian stance for Israel.

This year, on October 31, 2017, Australians and New Zealanders will mark the centenary of this amazing battle with a re-enactment in Beersheva complete with horses!  Scores of Australians are planning their trips to Israel around this monumental event.  There will be 100 riders parading through the streets of Beersheva, and the re-enactment will take place on the very field of the historic charge of the LightHorse Brigade.

“History shows”, Joy says, “and I also believe, that God helped us bring about the State of Israel.” Joy is proud of the part Australia played in the battles and feels the friendship between the two countries continues to be strong.

Joy is a powerhouse of activity for Israel and especially for CFOIC Heartland.  Whether she is arranging a day tour for fellow Aussies in Judea and Samaria, hosting Sondra in Australia or phoning up pastors to teach them about Israel, Joy always has Judea and Samaria on her mind.  She feels honored to be in a position to make connections between Australians and Israel, and especially Judea and Samaria.  Whether she is approaching people on vacation in Israel or meeting with post high school students on their gap year, Joy is connecting people to the Biblical Heartland, encouraging them to “pick up on the heart of Israel.”