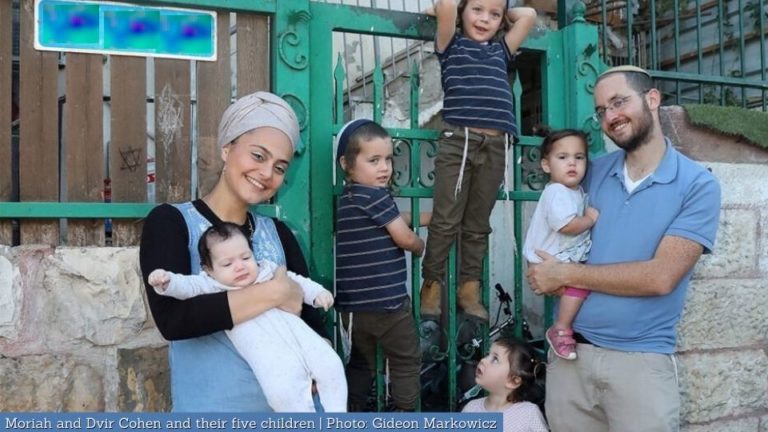 This morning, Moriah, a young Jewish woman living in the Shimon HaTzadik neighborhood of Jerusalem, was stabbed by an Arab terrorist as she was walking her children to school. The terrorist was a 14-year-old girl and Moriah’s neighbor.  As soon as she had brazenly stabbed the young mother, the girl went off to her nearby school.

Thanks to security cameras in the area, the young terrorist was captured on film and police tracked her to her school, where she went about her day as if nothing had happened.  A 14-year-old girl sets out to murder a Jew on her way to school.  What kind of human being does this? What kind of family raises a child to do this?

Moriah lives in a neighborhood often referred to as East Jerusalem, although it is more accurately North Jerusalem.  It is a short distance from the Old City of Jerusalem and is an area where Jews lived and owned property before 1948.  In 1948, the neighborhood was captured by Jordan and was illegally occupied by the Jordanians until it was miraculously liberated in 1967.  In recent decades, as a result of long and arduous court cases, the land was returned to its Jewish owners, the buildings were restored and modernized and today, dozens of young Jewish families live there, side-by-side with their Arab neighbors.

Thank G-d, Moriah suffered only minor injuries and the rapid response of police and medical staff got her to the hospital very quickly.

This horrific attack came on the heels of an attack just the other day, when an Arab terrorist stabbed a young Jewish man as he was crossing the street, near the Old City of Jerusalem.  He was more seriously injured, but thank G-d, he should recover completely.  From his hospital bed, he recalled that when he first saw his attacker, it didn’t occur to him that he was going to stab him.  He assumed he was just someone crossing the street from the opposite direction.  But here, too, another miracle occurred.  Border Police were right on the scene and neutralized the terrorist very quickly, saving their lives as well as the lives of others in the area.

Unfortunately, Eli Kay’s story did not end so well. Just two weeks ago, this 26-year-old man was walking from morning prayers towards his job as a tour guide at the Western Wall. Eli was murdered by a Hamas terrorist who was a teacher at a Jerusalem municipal Arab-language school.  But in his free time, he doubled as a religious preacher and among his sermons, he taught hatred of Jews and Israel and encouraged Jihad (Muslim Holy War) among his young charges.

Eli Kay was an amazing individual.  Born and raised as a religious and Zionist Jew in South Africa, he decided as a young man to make Aliyah (immigrate) to Israel.  He spent some time in a yeshiva, a Bible school, strengthening his faith and his knowledge of the Bible and Jewish sources.  He then joined the IDF.  It had been his dream, even in South Africa, to become an IDF officer and serve his country in this significant way.  Upon his release from the army, he moved to a small community near Gaza to strengthen that vulnerable area, and he worked in Jerusalem, teaching visitors about our heritage and faith, so rooted in Jerusalem.

Eli infected his entire family with his love for Israel and just a few years after his arrival in this land, they joined him in Israel.  His parents and siblings settled in Modiin.  His brother had just gotten married three weeks before the terrible attack and the family was plunged from the euphoria of marriage to the depths of a funeral.

At the funeral and during the days that followed, the Kay family never expressed regret for their fateful decision to move to Israel.  On the contrary, they placed their trust in G-d, despite their terrible loss, and clung faithfully to their land and their people, knowing that they had come home.  And the people of Israel embraced them with warmth and solidarity.

Just after Eli’s murder, Israeli security forces announced it had identified a Hamas terrorist network operating in Judea, Samaria and Jerusalem, arresting some 50 terrorists.  The network received its instructions and financing from Gaza and Europe.

Many are wondering if we are at the beginning of a new round of terrorist attacks.  We are not seeing massive riots or widespread interest in terrorism among Arabs in Judea and Samaria.  Most remain committed to making a living and supporting their families. They lost a lot during the Second Intifada and have only gained from the relative quiet in recent years.  And there is widespread mistrust of the Palestinian Authority within Palestinian society, who see their leadership, rightly, as corrupt and narcissistic.

However, it is the religious fundamentalists that get us most worried.  The Hamas leaders that brainwash and inflame young people against Israel, whose terrorist cells operate all over Judea and Samaria, providing weapons and strategic assets to all those interested in Jihad.  And while the Palestinian Authority is not directly supporting terrorist activity at this point, they remain incredibly active in poisoning the hearts and minds of Palestinians towards violence, giving them false hopes of freedom in the context of a Palestinian State, which we all know will never happen.

While the situation is difficult, though, there is always hope.  And it is the people of Israel who are our greatest source of hope.  When we learn of Eli Kay and his family who left a good life behind in South Africa to join the Jewish people in our land and who paid the ultimate price, we know that our people are truly dedicated, determined and strengthened by faith.  When we meet Moriah, who after surviving a stabbing attack, remains committed to living in an area of Jerusalem where Jews are most vulnerable, but at the same time, most needed  we know that we will prevail.  Am Yisrael Hai!  The Nation of Israel Lives!

10 thoughts on “Israel Will Prevail”